Collaborating across divides. About the group of artists, based in Karachi, Pakistan, creating collaborative works of art in everyday urban spaces. 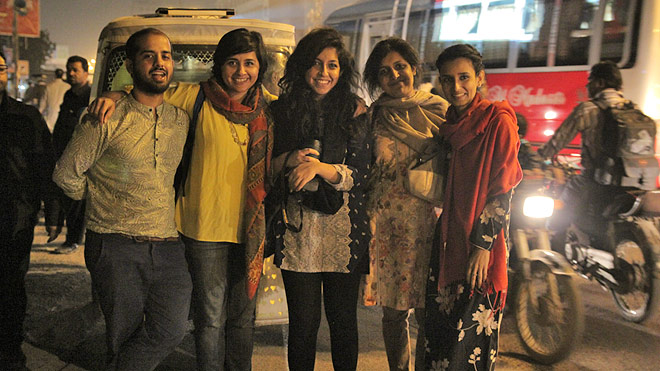 The Tentative Collective is a group of young people working throughout the city of Karachi, sharing ideas and resources and producing images, but mostly projecting images from a rickshaw-powered projector, and in that way attempting to connect the experiences of artists, institutions, and ethnically diverse audiences across the public realm of the city with its many layers and divides. The collective was founded in 2011 by Yaminay Chaudhri. Its core group members include Hajra Haider, Zahra Malkani, Shahana Rajani and Fazal Rizvi. The "idea of working collectively and collaboratively," as stated by Shahana Rajani, in order to "explore and (re)discover the city," as commented by Hajra Haider, is what drew the group of people from very diverse practices together. While their approach seems to be directed towards the city as a place of appropriation and re-appropriation, they at the same time tap into the metropolis as a source of often unconnected communication and circulation of mechanisms.

In Karachi, there is no narrative of a shared social life, nor is there a narrative of a shared history. Karachi’s story does not date back to the Mughal era, as does Lahore’s, but is instead more or less a creation of the mid-19th century, and in particular it is a story of rapid growth and development in the aftermath of the Second World War. It is rapidly swallowing its surroundings, and above all it is attracting migrants from rural areas and other countries. Thus, in the absence of the burden of history, Karachi has itself shaped its citizens—community by community, ethnicity by ethnicity—each perhaps belonging to the city, yet with very little inter-communal and inter-ethnic interaction. Could this in part be the reason for the state the city is in?

Within the urban topography of Karachi there are many artists, writers, filmmakers, all engaging in their own ways with the multiple layers of this complex city, its recent past and its vexed present. The society’s many social fabrics, the enormous commercial energy, the co-existence of capital growth and urban decay—all of this has become a repository for the work of a number of artists. Within this climate, a group of artists investigated the city’s visual space and its many productive energies in the early 1990s. This movement would later be referred to as "Karachi Pop", one that has lastingly influenced artistic production and theoretical thought far beyond the boundaries of the city itself.

One of the concerns central to the initiative of the "Karachi Pop" movement was how autonomous art can at all engage with and respond to the visuality of popular taste and the conflicted situation within the city. The Tentative Collective sets out from a similar position, but instead of exploring the popular or the everyday, their early projects Beyond Walls and A Pakhtun Memory—the latter receiving a lot of attention at film festivals—explored possibilities and limitations by interacting with instant communities, thus generating unconventional forms of participation.

In 2012, the Mera Karachi Mobile Cinema project set out to offer free film screenings in local communities. Cell phone films were made by individuals from the very communities in which the screenings took place. These everyday experiences projected onto walls, trains, train stations and buildings created a space for temporary encounters and dialogue, revealing some of the private to the public. More recently, since January 2015, the collective launched a series of projections [1], collaborating with artists whose work already had a deep affiliation with the city of Karachi.

Bani Abidi’s Funland-Karachi Series II (2014) initiated these screenings. This multichannel video installation was produced with the support of the 8th Berlin Biennale and the DAAD Artists Programme. The intention behind screening these videos at different locations in Karachi was to invert the original production sites of the videos so that they could be inserted into different contexts of the city. This act can be interpreted as the Tentative Collective’s insistence on the possibility of sharing something, of interacting with each other, of making disconnected societies audible to each other.

The screening of Naiza Khan’s video of Near and far sights/sits converge, a video that was shot through a homemade telescope at Manora Beach, just a short ferry ride away from crowded Karachi, during a monsoon afternoon in 2014 and within the dense labyrinth of ‘galis’ in the Golimar neighbourhood, followed this concept of inverting the space of the original site to bring it back to the mohallas and its inhabitants, to the people who head out to the beach and Manora Island to momentarily escape conflicted everyday life. With this, as with the following projections, the Tentative Collective’s approach to the city and their intention seems to be to arrive at an understanding of their own predicament of how to belong to this city, a dilemma that many artists in Karachi have ultimately confronted.

How can the meaning of the Tentative Collective’s work be brought into dialogue with the city of Karachi?

The collective’s practice has often been discussed in terms of a social activism with which the group does not wish to associate. Transgressing spatial boundaries within a city as large and complex as Karachi seems to be a targeted challenge for the Tentative Collective, as well as the artists whose work the collective projects. Fully aware of the implications of working with multiple players, audiences and perspectives, the Tentative Collective faces the reality that the many longings of Karachi and its inhabitants cannot be defined within this vast space and geography. Thus, it is perhaps within the distinct but interrelated notions of space and place that their practice needs to be discussed, viewing space both as a site from which to enact aesthetic practice and as a discursive field, an enabling position that opens the way for self-reflexive agency. Shahana Rajani’s reflection on the collective’s practice at large sums it up well when she says, "I think all of us are interested in critical knowledge productions through new ways of seeing, new modes of engagement and new sets of relations." [2]

Tentative Collective
People who share resources to create collaborative works of art in everyday urban spaces. They started this collaboration in Karachi, Pakistan in December, 2011.