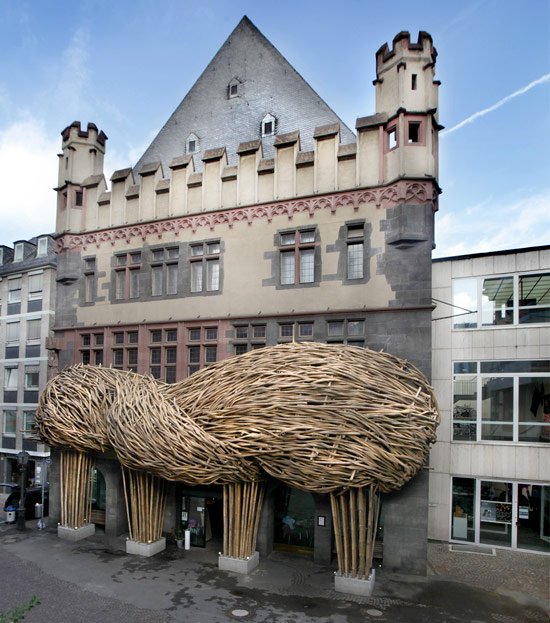 Until 10 January 2016, the Frankfurter Kunstverein presents "Roots. Indonesian Contemporary Art," featuring Joko Avianto, Jompet Kuswidananto, Eko Nugroho and the artist collective Tromarama, who all emerge from a younger generation of the so-called Post-Reformation. Starting in 1998, after 30 years of Suharto's autocracy, this era is characterized by a new found freedom of expression and experimental liberties. Their artistic practices root in the awareness of Indonesian culture and range between the poles of tradition and participation in modern life. The four artists unite political discourse, religious beliefs and traditional craftsmanship with popular culture, street-art and comic illustration. The Frankfurter Kunstverein presents artworks, which have been realized specifically for the exhibition and -in some cases - on-site. The spectacular bamboo installation by Joko Avianto transforms the Kunstverein's facade taking immediate effect on its architecture and Frankfurt's urban surroundings. Inside the exhibition space Jompet Kuswidananto, Eko Nugroho and Tromarama each have a broad platform to present their works.

Indonesia ranks as one of the most populous countries in the world and unites many different ethnicities, languages, religions and cultural influences in the more than 17,000 islands comprising the archipelago. Under Dutch colonial rule, which lasted for nearly 350 years, Indonesian culture experienced severe socio-cultural upheavals. By the middle of the 20th century, a modern, westernized society had emerged. Political instability and the effects of a prolonged struggle for independence still reverberate in the tension permeating today's society. Indonesia's contemporary art production expresses the multidimensional aspects of the country's history, its relationship with nature and spirituality in conjunction with contemporary pop culture, political attitude and public life. All presented artists live and work in Indonesia and are therefore part of this vibrating social environment, which is captured by a rapid transformation from a traditional to a modern society. However, the artists' work creates the distance necessary to take a critical stance. It grounds short-term change within a deeply rooted, complex socio-cultural tradition in which the tension between traditionalism and modernity, nationality and internationality, locality and globalism, universality and plurality becomes apparent.

For the realizations of his artistic concept, Joko Avianto has increasingly incorporated bamboo. Using this material, Avianto creates site-specific, large-scale installations for public spaces. In his sculptural experimentation, Avianto makes bamboo the primary subject, but at the same time breaks with its traditional usage. Above all, the artist is committed to formalism. From this position, he develops forms and techniques, which enable the extremely static material to be moulded into plastic forms. His works assert themselves as autonomous architectures and acquire a unique aesthetic presence. Working with this renewable resource not only marks a new artistic strategy, but expresses a critical view on the environmental implications of modern life. Avianto thus endows his work with an intrinsical awareness of the essential societal value of art. His studio in Bandung is based on a community project; in using bamboo he refers to its traditional use as building material, which is gradually being replaced within a rapidly growing society and its industrial development. Set up in the course of three weeks, Joko Avianto's installation "Pohon Besar" (A Huge Tree) on the facade of the Frankfurter Kunstverein incorporates 1.500 interlaced bamboo sticks, specifically cut-down and each 6 m long.

Eko Nugroho began exploring public spaces, especially walls, as an artistic medium while still a university student at the Yogyakarta Art Institute. He subsequently established "Daging Tumbuh" (A Growing Meat), an art space for street and comic book art, which is equally open to artists and non-artists. From its origins in public spaces throughout the city of Yogyakarta, his artwork has expanded into various spaces, both indoor and outdoor. Nugroho's two-dimensional drawings, embroidery and emblems are also embodied in his exploration of three-dimensional space. In the exhibition, Nugroho uses the floor, wall and ceiling to juxtapose symbols, visual ideas, patterns and forms that go beyond the boundaries of art or design and reach into political and socio-critical realms. He incorporates text into his artwork to satirize the meaning of common Indonesian sayings. Eko Nugroho grew up in the midst of cultural contradictions and he addresses these in his art. While still belonging to the traditional Javanese cultural heritage, in which traditional puppet plays, gamelan, embroidery and folktales are central, he is also part of the dynamic contemporary and international art environment, which cannot escape the wide-reaching influence of Western Culture. These cultural contradictions gain added complexity through the influence of pop culture, economic and sociopolitical crises and the position of Islam in contemporary Indonesian society.

A graduate of the Gajah Mada University in Yogyakarta, Jompet Kuswidananto is interested in kinetic transformations of sound and their translation into visually tangible shapes. In the 1990s, he started to create sound pieces, performances and large-scale installations. One of these, entitled "Garden of the Blind" was assembled from electronic waste. Recently, his art has begun to concentrate more sharply on certain socio-political issues. In the first decade of the 21st century, his work focused on presenting symbols and idioms characteristic of the Javanese Kingdom's army in a series of works entitled "Java Amplified," "Java Machine" and "War of Java, Do You Remember." Jompet Kuswidananto's contribution to this exhibition is a work entitled "Order and After." As in his previous work, the piece combines kinetic and visual elements of sound. Objects, including shoes, motorcycle parts and forms resembling pairs of human hands and hooded human heads are floating loosely in space, subtly assuming body-like forms. However, their artificial animation by means of noise and movement cannot hide the fact that they are only empty shells, resembling hatched cocoons or vacant houses. Jompet Kuswidananto thus explores human traces and marks the paradoxes of presence and absence, impermanence and permanence in post-colonial reality.

The artists' collective Tromarama, contributes a piece entitled "Break A Leg." 230 embroidered cloths are hung on lines, which permeate the whole exhibition space. The projection of a stop-motion animated film presents the subjects of the textiles' embroideries in an endless loop: A man wearing western office-apparel is running towards the viewer, while his silhouette is overlain by a digital time display. The words "Good Morning", embroidered on the margins, reference the name of a popular Indonesian towel brand. These allegedly domestic but ambiguous objects are embellished with golden thread and hung up like drying laundry. The work's critical undertone reflects on life in a post-industrial nation where everything is measured by the power of economy and where the impact of globalization and its request to increase productivity creates a rapid acceleration of life. Within the context of the installation, the phrase "Good Morning" takes on a double meaning. While implying the hope and optimism associated with welcoming a new day, the installation's structure reveals underlying ironies of urban life, which is defined by technological and digital utopias. The image contents of the animation and the embroidery motifs purposely contrast the slowness of the applied production techniques. With this work, Tromarama succeeds in making a subtle reference to the Indonesian balancing act between social reality and the roots of culture and tradition.

Curated by:
Asikin Hasan, Franziska Nori
and Rizki A. Zaelani

On the occasion of Indonesia Guest of Honour at the Frankfurt Book Fair 2015. 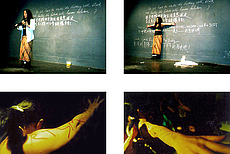 Exhibitions and events of visual arts, architecture, and performance art, related to Indonesia as Guest of Honour of the Frankfurt Book Fair 2015. 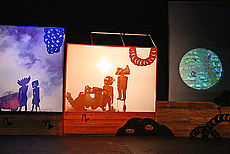 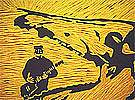 Video for the trash metal band Seringai from Jakarta, a woodcut animation made of 450 boards. 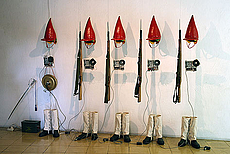