I Spy With My Little Eye…

A new Generation of Beirut Artists. Review of the show on view at The Mosaic Rooms, London, until 22 August 2015, curated by Sam Bardaouil and Till Fellrath. 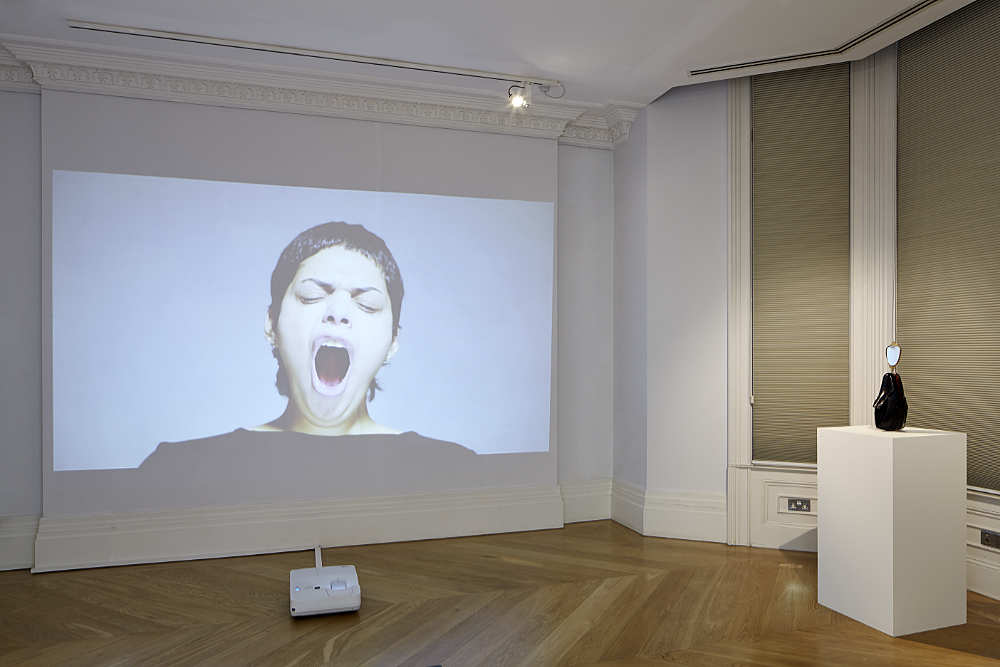 Thirteen emerging artists connected to Beirut, although not necessarily permanently rooted there. A new generation marked by new formal and semantic concerns. A new generation that is loosely positioned against the previous generation, the ones forming what has come to be understood as the contemporary postwar art scene in Beirut. A nascent movement with an affinity for the everyday, the ordinary, the personal. In the words of John Cleese: “Don’t mention the war.”

Of course, in the end the only thing that really matters is whether the art on view is any good. The answer, rather unsatisfying, is neither a resounding yes nor a loud no.

Upon entering the exhibition, one cannot avoid Mirna Bamieh’s staring face, projected large upon the wall. Look closer, and you slowly realise that the apparently still image is, in fact, moving, be it very, very slowly. A Brief Commentary on Almost Everything (2012) is the self-portrait of a yawn, abstracted by stretching out the time. It certainly holds attention, but for me not enough to question the meaning of the activity itself, in the way for example Bruce Nauman’s slowed down poking of his eye does.

On the floor sits a telephone with a small accompanying text including a phone number. Let it ring (2014) is an installation by Charbel-Joseph H Boutros consisting of three old-style telephones dispersed throughout the gallery, their placement, so I am told, forming an equilateral triangle that mirrors the equilateral triangle formed by the geographical locations of the three numbers. There is something delightfully random and poetic about it, with clear conceptual overtones, and I would certainly have liked to have seen the corresponding performance piece.

In the main room, next to the window, is a small heap of what looks like brown grass blown in by the wind, and turns out to be the rather more interesting copper casts of 1,000 pine needles from Caline Aoun’s installation Remote/Local (2015). It is elegant, sensitive, and understated, but within the setting of this exhibition also a little lost. It is apparently part of a larger installation, and it would perhaps have been good to see the work in its entirety.

The works on this main floor unfortunately all get a bit overshadowed by the overpowering sounds emanating from Geörgette Power’s video work Sans titre (moshi moshi) (2013), which traps the viewer in an anonymous digitised office setting with unclear instructions and electronic sounds. If the video’s aim was to alienate the viewer it certainly succeeded.

A modernist building - a Beirut setting - film. It already sounds like a dream come true. The building in question is Lebanon’s national electricity building, a poignant and symbolic choice considering the frequent power cuts and regulated rotating schedule in the distribution of electricity. Because of its subject and setting, Siska’s E.D.L (2011) manages to hold interest for its 21 minute duration, but only just. Super 8 requires attention to technical detail to keep the film in focus and the lens clean of overhanging threads. In this day and age it should also be a conscious choice with a clear purpose, to not make it feel needlessly Instagrammed.

In an overview exhibition such as this, with nothing to frame the works beyond the artist’s connections to the same city, it is always fun to discover serendipitous connections. One of the things that struck me is how many of the artists added an element to their presentation that seemed to try to elevate it out of their chosen medium. Tala Worrell’s perfectly good paintings, Lookers (2015), Earth (2015), and Boombox (2014), were presented with a selection of Dulux paint cans in the corner. Lara Tabet presented her otherwise very interesting photographic work The Reeds (2013) in a cardboard box on a desk with a lamp. Siska added a framed photograph of the electricity building by the architect to her video. Nour Bishouty’s Instead of a Resolution: Inside/Outside (2014), constituting of a line of rubber stamps reverse engineered from a passport was interesting enough by itself, but the addition of a cabinet with an arrangement of the wooden stamps themselves seemed a bit gratuitous.

I Spy With My Little Eye… certainly includes some strong works, and although they boost the less interesting works, they unfortunately don’t manage to bring the overall exhibition to life. Part of the problem is perhaps the reality that most of these artists seem well versed in the language of international contemporary art, and while their work is pleasant enough, there is too much room to provoke a little harder, engage a little deeper, or reflect a little more. It fails to move beyond the myriad of graduation and open-submission shows also on in London at the moment.

Curators:
Sam Bardaouil and Till Fellrath 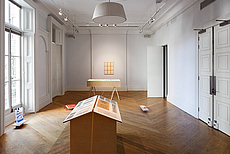 From The Intimate To The World. Six Algerian artists. Review of the exhibition presented at The Mosaic Rooms, London, 16 May - 28 June 2014.