Marwan Kassab-Bachi: Journey in the Topography of the Soul 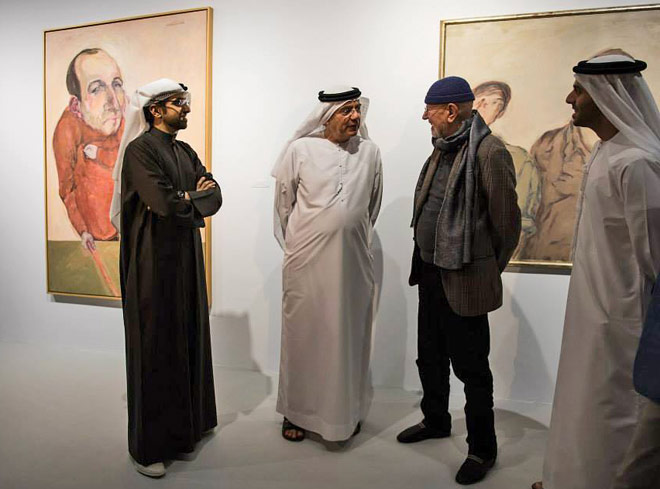 From the moment Marwan Kassab-Bachi looks up to take in the light descending from the heavens of revelation, he delves deeply into the mystery of colour and recreates that light on the surface of his rich canvas. This light is perhaps the light of Damascus which still shines in his eyes, although he left some fifty years ago. Or is it the light of Berlin which has permeated his inner being on his journey of self-discovery in every picture, sketch or stroke he has painted? Is it the light of childhood dreams, earlier dreams, which were to come true only when he was away from his homeland? But will there ever be a homeland other than that of the soul which, within itself, encapsulates the entire universe?

On 10 April 1957, Marwan arrived in Berlin on what he thought would be a fleeting visit. The intended destination of his journey had been Paris but he could not go there directly because of the political upheavals at that time. As it turned out, however, he had in fact embarked on a journey into the hidden corners of creativity that started with the study of art and led him to settle in Berlin, which at the time was a hub of artistic activity and immense creative energy. He was soon to find a niche amongst the creative artists the city teemed with and his artworks started to make their presence felt in the most important galleries, museums and exhibition halls. Marwan was soon to find the path that would lead him to himself, to his individuality. He was soon to learn how to bring together the threads of his creative fabric, to combine sight and insight, vision and intuition, and to explore his inner world with as much depth as he would explore the material world surrounding him with all its miseries and bitterness, and look through the windows of light opening around him.

Throughout an unceasing journey of discovery, Marwan was able to create a spiritual world parallel to the material world in which he lived. This started with a series of paintings which carried the name Khaddouj in which he would recall the memories of Khaddouj, the maid, whom his father had brought in from the provinces to work as a domestic helper. She was rather unusual, physically, he would recall. But she was also associated with all those childhood memories which transformed her into a visual metaphor that would dominate his artwork. Beyond Khaddouj, the artistic journey would take him into still life, the ‘dolls’ series, and face portraits, for which he was later to be renowned and which almost became his sole occupation and individual artistic field of interest. That artistic output in its various stages, in its richness and in the diversity of its expressive styles, was to embody both the inner and outer being of the artist. True art is that which in its very fabric fuses the creator and the created, in a manner that reflects the essence of being. No matter how simple the subject matter may appear on the surface, the ability to express inner thoughts remains the noblest means of conveying the meaning of existence. It is here that the magical power latent in art is most apparent. And it is here that we become fully aware of the wide spectrum that a Marwan painting would encompass. These normally go beyond the surface of the canvas, penetrating those inner crevices of conscience that are hidden behind the thin veil of form.

If we were to pause a little and ponder the ‘face’ portraits (or the ‘heads’ as Marwan would later dub them) and attempt, in those colour strokes, to trace the topography that has formed the artist’s visual icon, we would most certainly find ourselves faced by the indescribable. Thus, whether we conclude that the artistic work represents the concrete world, or some existentialist concept, or some artistic endeavour, or indeed any issue whatsoever, the work under scrutiny remains a self-sufficient entity in need of no mediator or critical approach. Nevertheless, we do mediate and we do approach a work of art critically, if only to appreciate the individuality of the output, ultimately as the only worthy, everlasting human activity, and the path to which we must cling to restore dignity to an existence marred by wars, massacres and catastrophes. For his part, Marwan has responded to that inner voice which represents humanity’s inner sense of identity or selfhood and its intrinsic tendencies, and has come up with his captivating aesthetic declaration. For our part, we must open our hearts and minds to receive, contemplate and reflect on these works with the soul’s eyes, and take in and feel that elegant rhythm which permeates the entire fabric of Marwan’s work. Will we be able to do this?

We are here before a creative artist who has spent his entire life excavating the soul. We are here before an artist who has explored incessantly the chemistry of colour steeped in the water of the heart’s springs. We are here before decades of creativity, a career celebrated by the whole world. Marwan, who was honoured by Germany when he was bestowed the highest distinction with the Medal of Merit and described as the ‘Soul of Germany’, is a Syrian ‘through and through’. Although never recognized or honoured by his own country, Marwan feels that the native blood flowing in him from his heart to his veins, buttressing his existence, and underpinning his conscience, is Syrian.

We may here recall what that great writer the late Abdulrahman Munif once said about Marwan, with whom he had a very strong friendship and with whom he shared many creative and human concerns: ‘Marwan belongs to a rare breed of artists who firmly believe that art is not just a form floating in empty space, but a moral act which links entertainment and joy with a search for the truth.’ This encapsulates the essence of what Marwan has worked on, and how he works. It also testifies to the fact that Marwan’s work ranks among the best in contemporary art, an output celebrated by the most important museums and galleries around the world. Barjeel Art Foundation has organised this exhibition of Marwan’s work; this comes as no surprise since it has always been a leading forum for the presentation of the most distinguished Arab contemporary artists. The Foundation’s exhibitions have certainly contributed in a major way to deepening artistic awareness and enriching the current art scene. Finally, given the artistic range of Marwan’s masterpieces, the present exhibition will be a gateway for all of us to enter into an appreciation of a unique experience that will remain embracing our souls long after we have left.

Artist, poet and novelist. Born in Syria in 1967, lives in Sharjah, UAE. Initiator and director of Mayadeen, an independent arts initiative.

Marwan: Topographies of the Soul