Perspectives on exile and the inner landscapes of those who have lost their native homes. Natalie Naccache, Lebanon, and Omar Imam, Syria. 10 - 20 Sept. 2015, Photoville, New York. 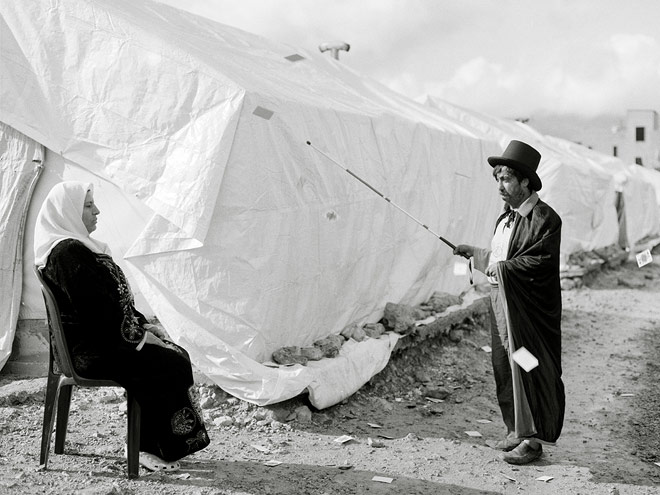 The Arab Fund for Arts and Culture is partnering with Magnum Foundation to present Live, Love, Limbo, an exhibition of photographic works by Natalie Naccache (Lebanon) and Omar Imam (Syria), at Photoville in New York City this Sept 10th - 20th. The photographers will also give a talk about their projects at Aperture Foundation’s Gallery and Bookstore on September 21st.

This presentation is part of the AFAC Cultural Week in New York 2015 entitled Uncover, Discover, Recover - Narratives from a Region in Transformation, running September 20th till the 26th. View the full program

Bringing together the dreams and anxieties of Syrian refugees who yearn to return to their country, Omar Imam’s Live Love Refugee and Natalie Naccache’s Our Limbo give us two very distinct and powerful perspectives on exile and the inner landscapes of those who have lost their native homes.

>> See a selection of photos
and the statements of the artists

Omar Imam is a Syrian photographer and filmmaker based in Beirut. Since 2003, his work has been largely personal and oriented around social campaigns in Syria. Since the Syrian uprising in march 2011, he has been using ironic conceptual photography as a reaction to violence, often publishing under a pseudonym. After leaving Damascus in late 2012, he started making fictional short films focussing on the issue of Syrian refugees. Individually or with NGOs, he has created films, photography projects, as well as workshops with Syrian refugees in Lebanon. He obtained a degree in accounting from the Commercial Institute in Damascus in 2001.

Natalie Naccache is a Lebanese-British photojournalist based between Beirut and Dubai. Having grown up to Lebanese parents in London, her work challenges preconceived ideas of the Middle East in today’s society. Her photographs have been published in various international publications such as the New York Times, Le Monde, Der Spiegel, D la Repubblica, The Independent, Monocle, The Sunday Times Magazine, Esquire, and Marie Claire. Naccache holds a BA Photojournalism degree from London College of Communication and a Diploma of Art Foundation from Camberwell College of Arts, London.

Following the exhibition of their photographic work, Natalie Naccache and Omar Imam will give a talk on their projects. Naccahe’s Our Limbo takes a look at Syrian families that have relocated and are now living in the middle/higher-class neighborhoods of Beirut. Imam’s Live, Love, Refugee is a series of photographs documenting the worlds of couples from Syria: how have war, revolution and displacement affected intimate relationships between men and women? The essay includes documentary and fictional photographs based on the lives of Syrian refugees in Lebanon.

Imam and Naccache are part of the first cohort of grantees from the Arab Documentary Photography Program (ADPP), an initiative that provides support and mentorship to photographers from across the Arab region. AFAC, in partnership with Magnum Foundation and the Prince Claus Fund, established the ADPP to stimulate compelling work by Arab photographers working across a range of experimental styles of storytelling.

The 4th annual Photoville festival takes place in Brooklyn Bridge Park and will feature over 70 exhibitions inside and outside of shipping containers as well as over 30 talks and workshops in various venues.

September 10-20 | Photoville
A photography exhibition by Omar Imam and Natalie Naccache
*Artists will be in attendance on September 20
Monday 21 I 19:00 | Aperture
A talk by Imam and Naccache on their projects
More information:
www.arabculturefund.org
Salim Tannous, Communications and Development AFAC
salim.tannous(at)arabculturefund.org

Part of the AFAC Cultural Week
in New York 2015

Uncover, Discover, Recover - Narratives from a Region in Transformation
20 - 26 September 2015