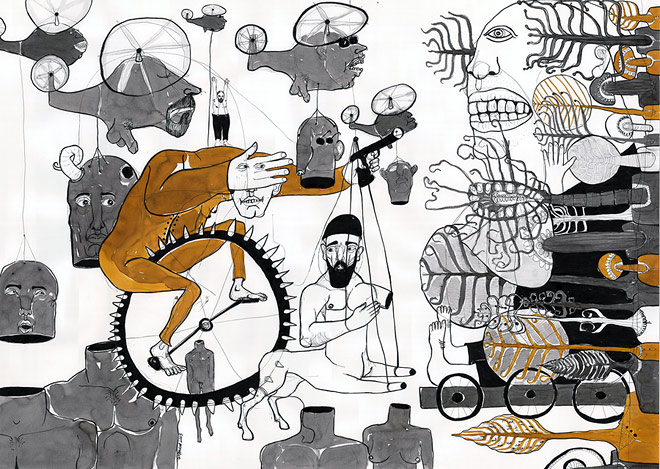 Photography, digital work, drawing / video / cinema / music / round table:
Featuring Monif Ajaj (Corgnac-sur-l'Isle), Ammar Al-Beik (Berlin), Akram Al Halabi (Vienna), Khaled Aljaramani (Lyon), Mohanad Aljaramani (Paris), Adel Daoud (Vienna), Aiham Dib (Damascus), Amr Fahed (Damascus), Ziad Kalthoum (Beirut), Randa Maddah (Golan Heights), Waseem Al Marzouki (Doha), Ossama Mohammed (Paris), Mohamad Omran (Paris), Noma Omran (Paris), Yaser Safi (Beirut & Damascus), Muzaffar Salman (Paris), Fadi Yaziji (Damascus).
The exhibition presents recent artworks of Syrian artists who continue to work despite the daily trauma, and in most cases, displacement. Those artists, among which some are well-established in the international art scene, continued to create during the revolution, then the state of war, in Syria. Some decided to stay in their hometowns; and others, are now in exile in Europe and beyond, as a part of one the largest diaspora in the beginning of the 21st century.

Their work depicts violence, daily life in time of war, their vision of reality, and maybe a potential future, through: photography, digital work, drawing, video, and painting. All together bring up questions of the ruins and destruction, but also of the meaning of art in time of war. It is both a passionate artistic view, but also, a historical testimony on the current times.