July - Oct. 2017, Sursock Museum Beirut. Recreation and destruction of his childhood home in Damascus. Reflections on the artist's project. 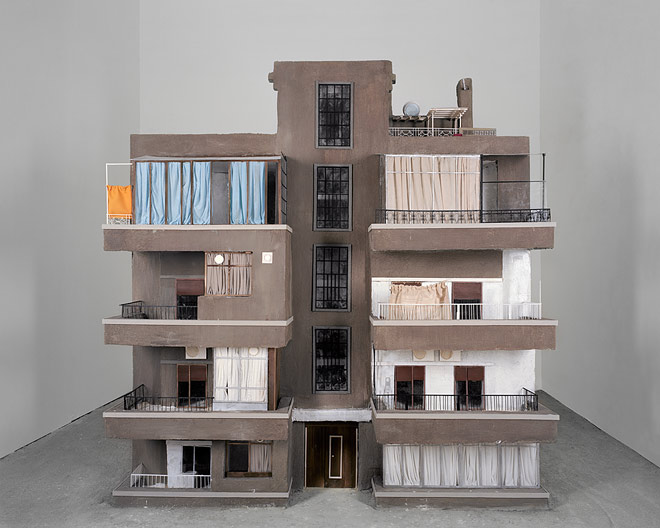 Exile is predicated on the existence of, love for, and bond with, one’s native place; what is true of all exile is not that home and love of home are lost, but that loss is inherent in the very existence of both.
Edward Saïd, Reflections on Exile [1]

A scale model of a non-descript muddy brown apartment block, of the sort commonly found in cities across the Middle East, fills the photograph’s frame, the first of a series of five large-scale images that form a part of Hrair Sarkissian’s latest project, Homesick (2014). A stairway running up the center of the building bisects it into two equivalent wings. Each features four front facing balconies, of which some are completely open while others have been partially enclosed to create additional interior space. The style and color of the curtains, window treatments and metal railings running along the edge of each balcony varies. A small water tank is visible on the roof as are the wall mounted air conditioning units and exhaust fans used by each apartment. Distracted by the high degree of detail it can take a moment to register that the structure is, indeed, a model isolated within a white walled space, and not real and part of the urban fabric of an Arab city. And though the photograph provides no detail through which we can confirm relative scale, its subject commands both the space and the frame in a manner that suggests a roughly equivalent relationship to the human body, somewhat comparable to that of Tony Smith’s Die (1968), an archetypal Minimalist sculpture. The structure is actually a 1:30 scale replica of the building in Damascus where Sarkissian grew up, and where his parents continue to live. Collaborating with an architect and a building contractor, Sarkissian worked from blueprints and photographs of the original structure to carefully construct this detailed facsimile at Darat al Funun in Amman, Jordan, which, unlike conventional architectural models and for an added degree of material verisimilitude, was made using actual construction techniques and materials like rebar reinforced concrete.

Sarkissian is not the first among contemporary artists to work with an architecturally precise replica of home. As art has become more global and artists’ lives more transiently transnational, home has become a frequent subject, a familiar motif through which one may address issues of cultural displacement, loss, memory and the past. Do Ho Suh’s sculptural oeuvre frequently features replicas of the many homes he has inhabited through the years. Made out of brightly colored but diaphanous fabric, the ethereality of the life size versions, which are sometimes presented suspended off the ground, recreate the fragility and transience of home as a visual and phenomenological experience. And in a detailed scale model like Fallen Star 1/5 (2008-2011), which is more materially present, Suh literalizes the clash of cultures commonly endured by immigrants, as one home physically crashes into the other. Since 1996 Rirkrit Tiravanjia has constructed life-size replicas of his New York apartment within galleries and museums around the world. Modestly built out of sheets of plywood, these replicas are fully functional and made to be inhabited and used freely by anyone throughout the exhibition’s run. Carving out spaces within the disciplinarian order of the white cube, they serve as shells within which acts of conviviality may unfold. But as a sculptural object Sarkissian’s model seems closest in terms of scale, materials and sentiment to Marwan Rechmaoui’s Spectre (2006-08), a replica of the modernist Yacoubian Building in Beirut, where the artist once lived, which serves as a repository of personal memories but also indexes the trauma of the Lebanese civil war.

What distinguishes Sarkissian’s project from these other examples is the replica’s eventual fate. Laboriously constructed over a month it was promptly demolished upon completion —by hand, through the better part of a day— a process documented in both still and moving images. Each of the other four large-scale photographs in the series mark the razing of a floor and by the final image the edifice has been largely leveled. This photograph, essentially a studio still life of a large pile of concrete rubble, resembles journalistic images of the aftermath of bombings, eerily evoking the everyday carnage experienced not just in Sarkissian’s native Syria but also in places like Iraq and Gaza. Sarkissian’s boyhood home serves as a proxy of sorts, for the countless others destroyed across the region.

Though Sarkissian emigrated in 2008, the civil conflict that has engulfed and devastated Syria since 2011 has made his return impossible, turning him into an unwitting and reluctant exile. As a Syrian-Armenian, whose grandparents were forced to abandon their homes in Anatolia under the threat of genocide, Sarkissian inherited the melancholy of exile and its elegiac poetics permeate much of his earlier work. On one level, Sarkissian’s replica can be understood as a nostalgic monument to a lost home, its photograph-like veracity providing a wealth of mnemonic anchors through which to desperately cling onto a fading past, while its eventual destruction serves as an allegory for its inevitable disappearance from memory.

But Homesick is, perhaps, to date Sarkissian’s most direct attempt to deal with the effects of his own displacement and the two videos that accompany the photographs reveal some of the complexities and contradictions of his own condition. An eleven-minute long silent video shows the model’s demolition in time lapse but never reveals the cause of the destruction; the building seems to implode, slowly collapsing in upon itself, its leveling the result of an inner pathology rather than attack from the outside. Another eight-minute long video, this one with sound, shows Sarkissian unsteadily but repeatedly swinging a sledgehammer. Though the clear assumption is that his blows are directed at the model, his target is never shown. Instead, the camera stays focused on his head and upper torso, studying his body language and the emotional response this act of destruction elicits; despite obvious anger and frustration Sarkissian seems to tire quickly. Through these somewhat contradictory videos Sarkissian seems to both admit and deny his guilt in the process, scrambling our understanding of the exile’s relationship to his home.

As conditions in Syria have worsened, the literal destruction of his home, and with it his family who continue to reside there, has become an increasingly real and paralyzing fear, a source of constant worry only intensified by the continuing separation and distance. The malady referenced in the project’s title is not therefore limited to a lingering attachment to a home once left behind and now seemingly lost forever but also refers to an exile’s growing frustration with a past he desperately wants to but is unable to escape, that continues to lay its claims through the deepest of memories, that refuses to release him. Homesick is a form of cathartic therapy, an attempt to exorcise the memories, traumas and paranoid projections that cohere to his childhood home by ritualistically obliterating its simulacrum. It is an attempt to refuse the very conditions of exile, of the loss inherent in the idea of home that Said so eloquently speaks of, by eradicating, at least symbolically, its very existence.

Featured in the same-named exhibition