Golshiri explains his focus on obsequies and grave markers. He reflects upon politics of hallowed grounds with examples of his grave markers, both in cemeteries and white cubes. 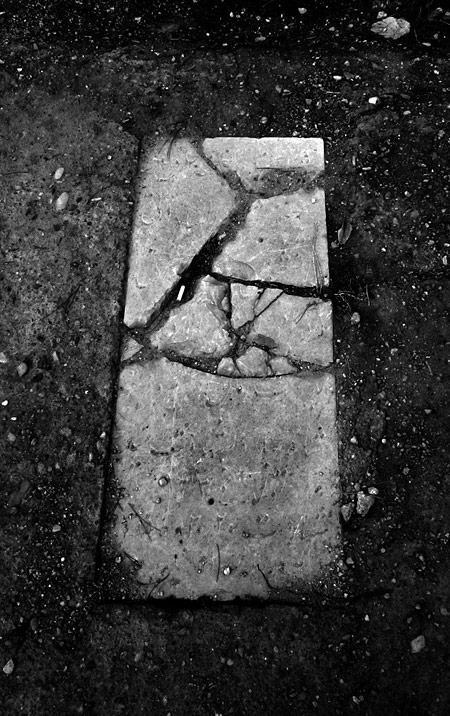 No other human activity is as rich and old as the obsequies and making of grave markers. Nearly all that we know from old ages we know from the graves and, say, the urns; it is mostly through these human manifestations that we understand what ruled peoples’ minds, for instance, what prehistoric religious beliefs and practices were. Where there are no historic records, obsequies speak: the way people buried the dead, the orientation of the corpse, the grave goods they buried along with the dead, how did they mark the graves and so forth. Art history thus is but an infant when compared with this history.

But one must be blind if one does not see the things these two fields share. Cemeteries could be perceived as "highly educational" places, as education lies in remembrance and knowledge in accumulation. In no other place than in cemeteries one can take a one-hour tour and skim through a vast history of architecture. These architectural phases are not necessarily bounded to their geographical contexts; Greenwood Cemetery, for instance, was founded in 1838, yet gathers centuries of diverse forms of architecture and art. Cemeteries also encapsulate misfortunes and calamities of societies and host memorials for national heroes and figures. These spaces are heterotopias of time for they enclose objects and people of all times and of diverse artistic and architectural styles in one real space. There’s only one other architectural space that functions as such: the museum. Museums too enclose all times and epochs in one immobile space and it is custom that the objects a museum holds, again like in a cemetery, shall remain intact. Cemeteries and museums are public spaces and most recently, in many countries they have turned to green open spaces. This though is not the case in Iran.

Like many other public spaces cemeteries are highly legislated, both written and unwritten. A close historical example is Bêhêsht-ê Zahrâ, located in the southern part of metropolitan Tehran, the largest cemetery in Iran. This cemetery plays an unrivaled role in Iran’s contemporary history and politics. On 1 February 1979, when Ayatollah Khomeini returned victoriously to Iran, he went straight to this cemetery and addressed the nation amongst the revolutionaries, martyrs, the dead and gone, unblemished mausoleums, broken tombstones and unmarked graves. It was among those grave markers that he rejected Shah’s regime and the new prime minister and his administration. Apart from Ayatollah’s followers, Iran’s history lies beneath the cemetery’s soil: It hosts corpses of martyrs of Iraq-Iran war to dissidents such as Iranian People's Fedai Guerrillas (image 1), a radical Marxist-Leninist movement formed in 1971, an organization that fought both against the Shah and the Islamic Republic; members of the Tudeh (= masses) Party of Iran; The People's Mojahedin of Iran, Sakineh Ghasemi aka Pari Bolandé, the legendary prostitute of Shah’s time, cinema superstars, athletes, Ahmad Shah, the Qâjâr king and his wife, Reza Shah’s last wife, Sa’eed Emami, one of the master minds behind the serial killings of intellectuals, and most recently, martyrs of the Green Movement. No other space embraces such diversity. Though one can add to this list infinitely, there are those expelled from this hallowed ground, for the reason that infidels and apostates shall not contaminate the resting place of Muslims.

Contributing to this space cannot be compared with any other contribution. One of my contributions to this monstrous heap of savagery, compassion, joy and treachery had to tackle the core idea of a grave marker. I had to topple several legislations and introduce new ones. The Untitled Tomb was made for a man who was denied a tombstone. Tombstones of such people are being broken systematically and all across the country there are many anonymous graves that are of course known to their friends, comrades and families. (image 4 & image 5)

The family of Mim Kâf Aleph commissioned me and together we thought of something that cannot be broken. But what one could make when even Dr. Mohammad Mossadeq’s colossal memorial was destroyed: Mossadeq, the democratically elected Prime Minister of Iran from 1951 until 1953, whose government was overthrown in a coup d'état orchestrated by the British MI6 and the American CIA, had wished to be buried near the martyrs of 30 Tir [1] in Êbn-ê Bâbêvayh cemetery. The Shah denied his request and his corpse was unceremoniously buried in the floor of his house. His wish was not fulfilled even after the revolution, yet on the occasion of 30 Tir anniversary members of the Party of the Iranian Nation (his leader, Dariush Forouhar, and his wife, Parvaneh Eskandari, also a dissident and an activist, were brutally murdered in 1998 during the serial killings and were buried in Bêhêsht-ê Zahrâ) erected a memorial in his name at the burial site (image 6). Less than a week later the memorial was pulled down and was consequently crumbled, apparently by means of a crane or a similar machine. The crumbled memorial, now that it is fallen, looks more like a cenotaph, a tomblike monument to someone buried elsewhere. (image 7)

Besides, putting any grave marker for Mim Kâf Aleph could have endangered his family. So The Untitled Tomb was made to be ephemeral; a stencil in two parts that each season the family takes with them, places on the grave and stealthily pours soot powder on it. The text is thus imprinted and depending on wind strength vanishes in a few days. (image 8 & image 9) This did not merely go against the cemetery’s status quo; it did in fact reject what conventional grave markers offer, namely perpetuity of what marks our ephemerality. Grave markers function as a Vanitas that merely depicts death and symbolize perishability of our lives but their own body, presumably, shall never perish or even alter. (image 10)

A sarcophagus, literally "flesh-eating", shall decompose the body, yet the object itself has to remain intact. But Chohreh Feyzdjou’s sarcophagus, an Iranian artist who worked and died in Paris, is now vanishing. The need to pass through matter was essential to Feyzdjou’s corpus of work. The corporeal aspect of art was not secondary to hers, and traces of liveliness were all eliminated in her work. So since the process of death was the very process of metamorphosis, Concession Éphémère was made to be a lingering alterable ephemeral marker, a sarcophagus not of stone but wax, walnuts stain and soot, and remains of her posthumous work, namely coconut fiber to resemble hair. With all that the artist frequently used an altering vanishing sarcophagus was put on her grave in the Pantin Cemetery. (image 11)

But not all grave markers mark burial sites. Cenotaphs contain no corpse and mark none. Most of those grave markers I’ve made could be perceived as cenotaphs: Cenotaph of Jan Van Eyck, who was buried in Cathedral of Saint Donatian, later gone astray by the French; La Petite Mort de Sade, a memorial for D.A.F de Sade; Tombstone for Borges' Assassinated Translator, Death Sentence (a memorial for Ezzatollah and Haleh Sahabi and Hoda Saber) [2], Cenotaph for Arin Mirkan [3] and so on. Ahmad Mir-Alaei was the first to translate works of Borges into Persian. On October 24, 1995 he left home at a quarter to eight in the morning for a date in his own bookshop at 8 o'clock, but he never reached there. He was supposed to deliver a speech at the medical college at two o'clock in the afternoon of the same day. But lecture was cancelled due to unannounced reasons. At eleven o'clock pm the police reported the discovery of a body and asked the family of the victim to come to the police station to identify the body. The reason for death was announced cardiac arrest. In Iran, his name is associated with Borges. His case, like many other serial murders of Iranian intellectuals has remained an unsolved puzzle. The translator reportedly had been threatened and even detained by security forces before and taken to a hotel for questioning. His body was found in the Jolfâ district, Isfahan. A half empty bottle of handmade vodka and cigarettes were said to be lying beside his body, with injection marks on his arm. His stomach had not absorbed the ingested alcohol since he was gone, long gone. (image 12)

Cemeteries are to tame the exiled, inhabitants of a heterotopia. Their regulations are to render death, murder and execution harmless. My greatest intention has been to alter this, but when my interventions thrust into other spaces such as museums, they lose their power. Conservator-restorers and curators are there to cure them, to make them perpetual, to call them sculptures since they have no other words in their narrow classification.

Barbad Golshiri explains why he has focused on obsequies and makes grave markers.

He reflects upon politics of hallowed grounds and gives a few examples of his grave markers both in cemeteries and white cubes. 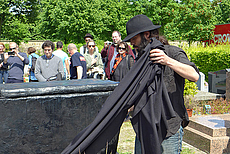 In a tribute to Chohreh Feyzdjou, Golshiri has constructed a sarcophagus that was placed on the site of her grave in the Pantin Cemetery of Paris on 16 May 2014.