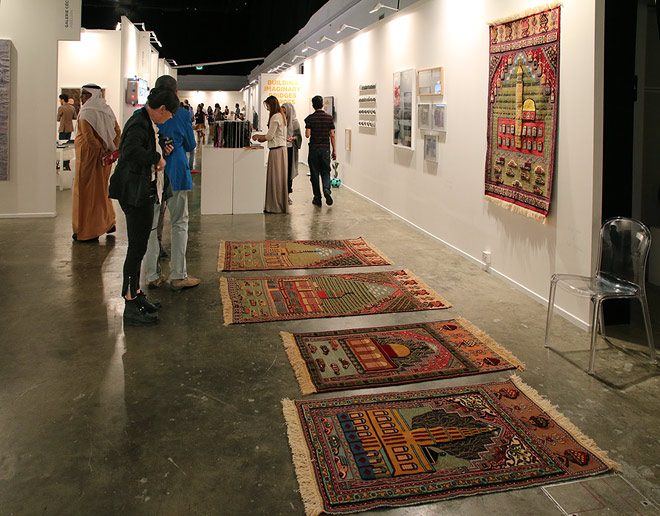 Marker is a section conceived to "accentuate Art Dubai’s role as a fair of discovery and a site for intellectual exchange." Every year, the curated program within the contemporary art halls focuses on a country or region that the organizers consider underrepresented in the international art circuit, or at least in the Gulf region. So far, these have been Indonesia (2012), West Africa (2013), and, in 2014, Central Asia and the Caucasus. This year the Marker program was devoted to Latin America.

As a matter of fact, art from this huge part of the world had had very little presence in Dubai up to this point. However, in the neighboring Sharjah Biennial, just 40 km away from the Art Dubai fairgrounds, a considerable number of artists from Latin America have already been represented over the last 10 years, often with large site-specific projects. In 2013 alone, 12 artists were invited, among them international stars such as Ernesto Neto, Gabriel Orozco, Pedro Reyes, and Francis Alÿs. Also, this year's Sharjah Biennial (open until June 5, 2015) has invited six artists from this region. Among them the Argentinean Adrián Villar Rojas, who has transformed a former ice factory in Kalba, on the East Coast of the Emirate, into a Gesamtkunstwerk, truly a "total work of art."

One was therefore eager to see how art from Latin America would be mediated and appreciated in the tight framework of this section of Art Dubai. Curator Luiza Teixeira de Freitas decided to abandon the principle of selecting galleries or art spaces, although this was a reliable, tried and tested procedure that had been used in previous years. Since any attempt to offer a representative cross-section would have been an impossible task, she proposed to reveal interconnections between Latin America and the Arab world "from hundreds of years of migration to today’s trading relationships, via a shared sensibility and approach to art practices." At the opening press conference, however, she hastened to relativize this by admitting that she would have needed at least three more years of research in order to do this properly.

Other declarations made by the curator cast doubt on her being qualified for the job. Carried away by her enthusiasm, she commented that the "highlight of her research trip" was a discovery she made in "the small town" of Cali (with 2.7 million inhabitants this Colombian city is larger than Dubai). There, she visited Lugar a Dudas, one of the most important independent art centers in Latin America, and was totally thrilled when "in the middle of nowhere" she was offered falafel to eat. Eventually, only the falafel kiosk was invited to Dubai, in the name of cultural exchanges between Latin America and the Arab world, and not the internationally active and renowned art center.

In Marker 2015, the performance program curated by María José Arjona deservedly received the greatest attention. The Colombian artist worked together with students based in Dubai to reenact historical performances from Latin America, and was present as mediator throughout the fair, providing explanations and engaging in lively discussions with the audience. Similarly, the well-thought-out programs of sound and video conceived by other curators and artists had an important impact.

The largest exhibit of Marker was Building Imaginary Bridges Over Hard Ground, curated by Teixeira de Freitas herself to "bring together works that in some way – intentionally or not – build bridges and make connections between Latin America and the Arab world." Even though the exhibition featured works by very interesting artists, it was kind of a hodgepodge, and the alleged relationships with the Arab world could only be learnt through the rather implausible and sometimes downright absurd explanations given by the curator during her guided tours. In the booth there were neither exhibit labels nor any context information and the artists’ names were merely handwritten with pencil on the wall. The announced catalog was not delivered until our departure.

It is highly questionable whether the way in which art from Latin America was featured in this edition of Marker has represented a significant contribution to increasing public awareness and appreciation for it.

>> Photo Tour
(with no artwork captions and additional information, exactly as it was at the exhibition)

Here an overview of the Marker program in 2015:

A salon-style presentation of painting, drawing and sculpture by more than 15 Latin American artists. Galleries and institutions from across Latin America have been invited to participate and are loaning work for this group show.

Tijuana (São Paulo, Brazil) & The State (Dubai, UAE) will co-present a selection of books created by independent and artist-run publishers from the Arab world and Latin America, many of which are rarely accessible in the Gulf.
This section of Marker draws artists’ books and indie publishers into the heart of the fair for the first time. The programme offers audiences the opportunity to make connections and explore publications which draw on the complex history and contemporary reality of Latin America and its connections to the Arab world.
Film and Video

Videobrasil, the São Paulo-based association, directed by Solange Farkas, that fosters and produces art and film across the geopolitical South, takes over the Art Dubai Cinema with a specially curated selection of films from their archive accompanied by artist talks.

María José Arjona (Colombia) has conceived a special project which investigates the history of performance and commercialization of performance-based works. Subject-Object delineates a relationship between the body and the world, where subjectivity as we understand it, is transformed into a plane or site specific territory from where to relate to something located outside of it. The body conceived as connector, generates different narratives and poetics, always thriving to multiply its capacity to create, react and enact.
Actors and students from the UAE will be selected and taught by Arjona to re-enact the works at Art Dubai, each day of the fair.
Sound

Beyond Marker, the ‘Latin American spirit’ spreads throughout the fair. Several galleries within the Contemporary halls have opted to showcase artists from the continent, while in the not-for-profit Projects programme, Maria Thereza Alves (Brazil) participates in Art Dubai Commissions.