About the Palestinian artist whose work contributed to an early phase of the building of an explicitly Palestinian identity. 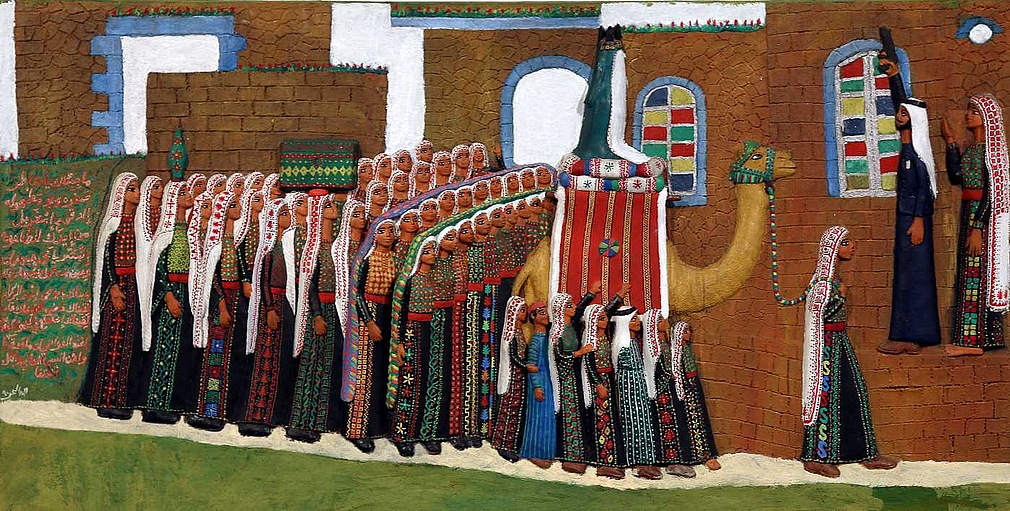 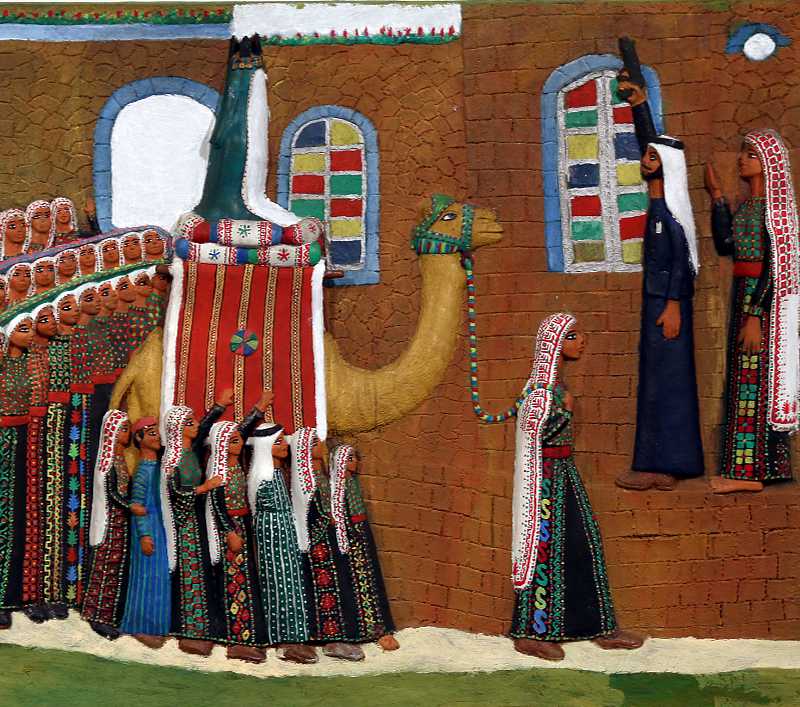 The work of Abdul Hay Mosallam Zarara is a direct result of the Palestinian Nakba, the catastrophe of 1948. It belongs to an early phase of the building of an explicitly Palestinian identity which consisted in the demand that the people's suffering be acknowledged and in the building of national resistance against the Israeli occupation forces.

Mosallam has never been skilled as an artist in a professional sense. From the beginning, his work has been a work of rupture. Rupture is its very foundation – even though apart from The Struggle, The Massacre and The Woman, one of his four proclaimed subjects is The Tradition. The original rupture informing his work may be understood as a reflection of the fate of the fifteen-year-old who was driven out of his village in Palestine after a massacre committed by Jewish fighters, and it is conceivable that precisely the distance from any aesthetic tradition facilitated his access to the memory of the traditional village life he lost forever. Abdul Hay Mosallam is a retired air force electrician, born in 1933 and now living in Amman. He is self-taught and has a clear artistic and political agenda. He has exhibited in Arab countries and abroad in contexts relating to the Palestinian cause, without ever receiving any consideration, however, from the professional art world.

Abdul Hay Mosallam’s work consists of paintings, more exactly reliefs, depicting people who are celebrating or battling: succinct representations of men and women connected to concisely rendered environments – constellations involving generalized figures rather than individuals, among surroundings evoked by emblematic details. The various elements are modelled with a paste made of sawdust and white glue, smoothed and painted, often colourful and bright. The most ambitious paintings comprise condensed scenes, narrative assemblies of figures, buildings and trees, visual metaphors that symbolize current events or past reality – sometimes, but not always facts that can be linked to an exact place and date. Each image is assigned the burden of representing the totality of an event or a situation, and is expected to be deciphered accordingly – the members of Abdul Hay Mosallam’s own society are able to do so without much difficulty, while people from a different background may find this more of a challenge.

Mosallam’s paintings are plain, they employ unambiguous figures and corresponding accessories to signify the Palestinians defending their home and their society against a monstrous, bloodthirsty Israeli-American aggressor, to represent scenes of traditional rural life, and to celebrate the mythologized figure of woman. Typically, such paintings would be classified as "naïve". Naïve here refers to imagery produced by a man who never studied art and who didn’t have a chance to see paintings when he embarked on creating his own. To make his first work he glued a magazine cover to a support and modelled on top of it because he didn’t know how to represent a face. His paintings are governed by frontality and the lack of movement of the figures, standardization and repetition, unshaded colours and the lateral juxtaposition of pictorial elements as well as the replacement of central perspective by a perspective of signification.

What connects Mossalam’s work to that of other self-taught artists is the condition of being without a history – in aesthetic terms, not in terms of reference. The work’s aesthetic does not come from any particular time or place, it negates all sense of development – be it the development of the work itself or the work’s incorporation into a genealogical lineage. It is radically singular, unprecedented and unjustified. While it shares its emblematic nature with street graffiti in Palestinian communities, and both concur in their denunciation of Israeli oppression and their commitment to the struggle for Palestinian independence, Abdul Hay Mosallam’s work lacks the conventional nature of graffiti. Its aesthetically anachronistic character invades the political consensus of people fighting the same fight by exhibiting unique and purely personal imagery. This idiosyncratic approach translates however knowledge and convictions pertaining to the collective consciousness. While the work appears aesthetically disruptive, it exhibits enough figurative ciphers to make the details and the narrative comprehensible – sometimes the paintings include lines of poetry or popular songs which can be understood as the expression of a residual doubt about the images’ capacity to convey unequivocal meaning, and the artist’s desire to dispel even the  last vestiges of obscurity.

At the same time, individual works exhibit features that are shocking and brutal in the way they deviate from the hieroglyphic nature of many of the paintings’ ingredients: columns of bodies stacked one on top of the other to represent the multitude of massacred people; a braid hugely extended against all mimetic conventions to indicate the Palestinian woman’s power to protect large numbers of her kin; bands ornamented with the keffiyeh pattern traversing the picture plane and connecting scattered individuals to reclaim the people’s unity; or fruit and plants displaying the Palestinian colours to ground the struggle in the land and nature. In one of Abdul Hay Mosallam’s compositionally most daring works, The Martyr Dalal Mughrabi (1978), emblems of Palestinian culture and indicators of the popular struggle whirl ecstatically around a focal point, a red eye expressing the shahida’s invincible strength. An aesthetic of signification is transformed into the aesthetic implementation of unimpeded unruliness. This is the most significant feature of Abdul Hay Mosallam’s works: the violent and uncalled-for intrusion of moments of convulsive beauty (to use a Surrealist term) upon a communicative setting of symbols and emblems.

Abdul Hay Mosallam’s work is invisible among political activists in the Palestinian society, because it lacks the efficiency of the conventional sign, and it is disregarded by culturally-minded activists because they prefer to leave behind what they regard as provincial in favour of global competitiveness – globalisation often being claimed to back demands for aesthetic standardization and the adherence to a consensual agenda. The international art world in its turn excludes such work, because the idiosyncratic nature of its anachronistic beauty offends that world’s collectivist legislation, a sort of undeclared academism. The out-of-timeness of such work is complemented by its out-of-placeness. This condition appears regrettable not only in cultural but even more so in political terms, because it withholds from the struggle against the occupation of Palestine the ciphers of unruly beauty that implement – even if in a feeble and disrupted way – in the here-and-now that which the struggle is for. It should not be overlooked that the efficiency of exclusion is silencing the voice of a former military man who has said that he considers the paint brush to be his weapon.

Berlin-based curator and art critic. From 1985 to 2010 he was the Director of the Kunsthalle Bern and the Kunstmuseum Luzern in Switzerland, and the Deputy Director of the Museu de Serralves in Porto, Portugal.