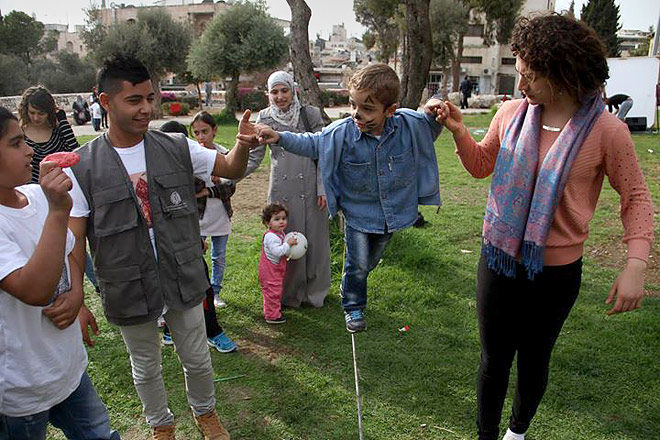 Zalet Lisan is a series of activities, exhibitions and public interventions targeting what is called the Rockefeller Park in Jerusalem (renamed by the project Karm Al-Khalili Garden). The project was launched in autumn 2013 by the Palestinian Art Court Al-Hoash as part of their visual art and community engagement program, focusing on art in public spaces, and aiming at reclaiming the publicness in Karm Al-Khalili Garden. This project is part of a continuous mission adopted by Al-Hoash to break the shattered geography of Jerusalem and the limitations imposed by the political and social borders.

Trapped in a city of colonial governance, with policies of segregation and fragmentation that rupture the function, form and perception of ‘the urban’; Palestinian Jerusalemites have long lost the sense of ownership of their public space. This has created an introverted and fragmented society that looks in aggression and dismissal to the public space, and has thus yielded countercultural expressions and straightforward vandalism. It is therefore of paramount importance to re-connect, using contemporary art, the societal loyalties and allegiance to the cultural idioms and the spirit of history; and consequently re-establish the relation between the individual and collectivity, between the public and private.

Zalet Lisan is committed to the notion of art as a means to ignite a decolonizing process for the learned helplessness of Palestinians entrapped within the harsh reality of occupied Jerusalem, and accordingly re-connect them with those living in the West Bank, Gaza Strip and exile. The diverse activities, partners and audiences are seen as instruments to break the inflicted confinement of the Jerusalemites and reestablish their relationship with the public urban space which has been considered through its historic management a mere representation of the colonial regime. Zalet Lisan draws attention to a variety of relationships between people, place and time, while it utilizes contemporary art forms in order to imagine alternative social and political futures.

Zalet Lisan - translates as a 'Slip of the Tongue' - is a popular term used to express an error in speech or memory that is interpreted psychologically as a product of an interruption caused by an unconscious repressed and subdued desire, conflict, or thought. In Freudian terms, this error is guided by the super-ego and the rules of proper behavior, revealing sources outside the dialogue that is taking place.

The notion of Zalet Lisan or a Slip of the Tongue is used as a means to investigate the Karm Al-Khalili Garden. The name is coined to Sheikh Mohammad bin Mohammad Al-Khalili, the Shaafa’is Mufti of Jerusalem who arrived in Jerusalem and lived there in 1559 CE. It is said that he decided in 1726 CE to transfer all of his assets including Karm Al-Khalili to the Awkaf as assets held by the Islamic Charitable Trust.

Zalet Lisan or a Slip of the Tongue excavates the unspoken narratives of the Zahra St. neighborhood around Karm Al-Khalili Garden that have either become a mundane, a suppressed history, or hidden secrets of unspoken desires. The project unpacks the reciprocity between the neighbors and the garden, between the morphology of space and its history, between the past, the present and the imagination of the future.

The notion of Zalet Lisan is juxtaposed with Ibn Al-Muqaffa's translated version of Kalilawa Dimna, an ancient Indian collection of animal fables known as the Panchatantra from the 3rd century BCE that take place mostly in the forest. The analogy between Karm Al-Khalili Garden and the forest where the animal fables of Kalilawa Dimna take place is seen as a parallel allegory.

The first phase of the project in October and November 2013 included a series of garden talks, community activities and an art installation in the garden.

This component of the project is concerned with breaking the social myths around the park and re-establishing the relation between the individual and collectivity, between the public and private. Due to the fact that the park has suffered a bad reputation, namely being possessed by drug addicts and problematic social groups, altering this quandary has become a crucial part of the project by means of initiating various community activities, which attract families and kids. These community activities and garden talks have the purpose of changing the inherited perception of the garden through engaging the community in collective positive experiences.

The art installation, which was realized in November 2013, was a multimedia installation in the garden with screens where animal videos are projected accompanied by a sound installation based on collected narratives about the garden from the community as well as narrated passages from the fables of Kalilawa Dimna. The Zebras, the Giraffe, the Peacock, the Rhino and the chimpanzees became surrounded with families from the Zahra Street, breaking the taboos and myths of darkness.

The next step will be an ongoing documentation of the activities of Karm Al-Khalili Garden in the coming year at the Palestinian Art Court Al-Hoash and a seminar on the role of public art in unpacking local quandaries in March 2014, where several academics, artists, curators and cultural practitioners will explore the role of public art in the public realm. Parallel, al Hoash announced the second part of Zalet Lisan, where artists will engage in researching and collecting personal narratives, myths and establish partnerships and cooperation with existing local organizations and active individual in Jerusalem to facilitate their manifestation.

Alia Rayyan is director of The Palestinian Art Court Al-Hoash. Yazid Anani is curator of the project Zalet Lisan. 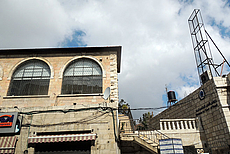 About the art center and its new plans to focus more on visual collective memory and the interaction between art and public space.