Developing the ethical issues that are inherent to the creation of spaces and to attracting audiences for video art’s integration in Algeria. 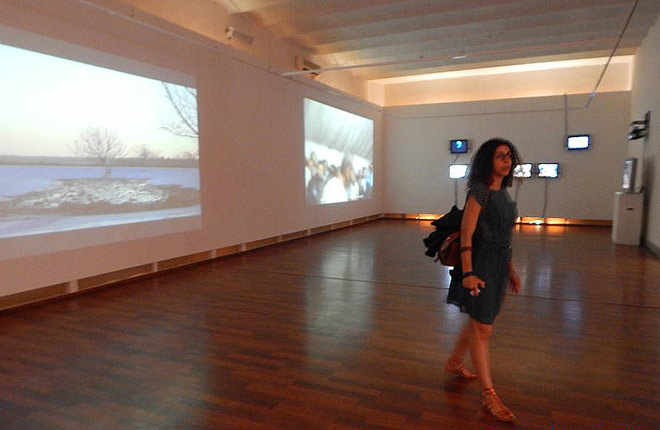 In Algerian society, the human body is subject to social and religious codifications that condition appearance and body language. To address the question of the body in videos made by artists in Algeria raises aesthetic and ethical issues that require elucidation and elaboration. Nevertheless, certain Algerian artists have not failed to initiate us to this subject in their videographic and cinematic expressions, although their work has rarely been brought together and exhibited in the context of a single curatorial program. In June 2014 at the Institut français in Algiers, I curated the video art exhibition, Le corps manquant (The missing body), which offered up this "video body" for experimentation. The distinct proposal of this exhibition leads me to present several additional works in which the video image testifies to an avowed interest in corporality, as much in the processes used as in the figured visual content. Why such apprehension about the body and fear of its reflection in the mirror of the video image? Do Algerian artists envision extricating this body from its socio-ethical codifications?

The Algerian public’s relationship to video art is virtually inexistent. Instead, a clear feebleness towards what shakes up traditions reigns and pictorial art remains ever attached to classical iconographic representation where Orientalist painting and different expressions cohabitate in their domination of Algeria’s artistic scene. A crisis of meaning persists after the observed decline during the black years when "priorities were elsewhere, due to the necessity of survival and, faced with this, art and its functioning could only be of secondary importance." [1] In taking refuge in the past by using these modes of expression and these kinds of painting models, Algerian artists repeatedly attempted to construct an original art. They did not succeed, however, because the model they chose was dated. Today, the evolution of contemporary Algerian art tends towards new media untested in the local artistic scene, such as photography, video, and different kinds of installation. These are being used thanks to a handful of artists who seek to confront them; at the same time, the Algerian diaspora benefits from extensive experimentation with these image processes. Consequently, the introduction of videographic expression to the artistic field corrects the prolific reorganization of Algeria’s artistic scene. It is decisive for freeing up aesthetic models for the figured body, particularly in the videos of Algerian artists discussed below, whose sensitivity and singularity of approach creates an incontestable foundation for video art in Algeria.

In Stridences Sangcommentaires? [Bloodcommentaries stridencies] (2001, 7 min), Ammar Bouras raises the painful memory of the civil war during the 1990s. Bouras "paints" the video image and speeds up the images that he renders imperceptible from the moment that they appear; he insists on the murdered bodies and "un-paints" the video image as an evanescent material, appropriating and integrating it in the process of making video images. We hear the noise of protestors in the street, unrest, speeches by fanatic Islamists, piercing sounds. Bouras reconstructs a tragic reality, with the movement of the image matching the violence of vivid colors that engender a feeling of dread. Appearance, disappearance, metamorphosis: the video image is constructed and deconstructed, pixel by pixel. According to Bill Viola, in video, "the fixed image does not exist. At every moment, electrons sweep across the monitor’s surface. Even a blank screen reproduces this rhythm. Silence and immobility only exist when the system is turned off and unplugged." [2]

Rachida Azdaou’s Trio déprimé [Depressed trio] (2009, 2 min) presents the superimposition of two bodies belonging to one individual. The video indicates a doubling of the personality that provides information about a psychological state. This individual contemplates a wall, then he tries to go over it. The soundtrack is cadenced with his worn out breathing. The echo in the empty room amplifies the sound. We perceive it as a cry of exhaustion: an enclosed individuality in his (private) space. He tries multiple times to confront the wall, an insurmountable obstacle that he continually tries to get past, but in vain. Melancholy settles in when he crushes himself. The sound offers a spatial projection of the melancholic body and struggles through the video image that materializes it. Recall Bergson, according to whom, "perception disposes of space in the exact proportion that action disposes of time." [3]

Video art irrefutably joins together with the performance of the body as an object of exaltation and repression. Mustapha Sedjal’s filmed action implies this performative model. It was at the Karima Celestin Gallery in Marseille where he wrote on the wall, Un seul héros le peuple [The people, a single hero] (2012, 5 min), and where he crossed out the word "people" to write instead "my father." Sedjal refers to filiation, to the transmission of the memory of the Algerian Liberation War from father to son and thus from mother to daughter. History is written by individuals who form an entity, a nation. Here, it is a question of the corporeal action through which Sedjal enters into a relationship with his own memory and with the personal history of his father. A way of inscribing and affirming his individuality when digesting colonial history.

Nevertheless, a primordial concept was missing in Algerian artists’ aesthetic and artistic reflection: love between men and women. Sexuality as a taboo is clearly dissipated thanks to Zoulikha Bouabdellah’s video slide show, Al-Attlal (2009, 2 min), which depicts illustrations from the Kama Sutra. Bodies entwine together under the calligraphic Arabic word for love (hūb) that appears over female as well as male bodies in geometric positions. This carnal moment is accompanied by a monotonous chant formed by velvety voices that murmur along with Middle Eastern music that was recomposed and adapted for the slide show segment. Bouabdellah proceeds using diversion, superimposing an aggrieved love song over erotic images; she modifies the singer’s lamentations, which become ambiguous sighs, verses about an amorous relationship that go through excitement, deception, love and death, becoming confused with the effigy of colorful decoration. These video images do not fail to refer to the poetic age of Arab erotology from the 8th century, when the sulfurous poems of Abu Nuwas exalted the ears of his amazed audiences.

The appearance of these bodies that move around on screen leads to an intrusive art of "repressed bodies" that video art exalts by way of an aesthetic of the stolen instant where Algerian artists’ intentions tend to inverse the process of the watched watcher by proposing a connected video image: "here, it is rather a question of a looking that is worked by time, a looking that would allow appearance the time to deploy itself as thought." [4]

In Algeria, video art is not exhibited in structures like festivals or galleries. Among new generations in Algeria and since Internet networks made video available to novices, we sense a need to experiment with this medium. Henceforth, digital art, such as interfaces of the interactive videos for the web documentary, Un été à Alger [A summer in Algiers], have become available without needing to diffuse them in an exhibition space which would be susceptible to the burdens of censorship and society. [5] Nevertheless, to amputate the artwork from its confrontation with the place where it was created is frustrating for the artist because it reduces his or her field of action. The artwork finds its affirmation in the experience that its viewers experience, whatever their origin; its force lies in its essential ability to touch feelings and spirits. The more the artwork closes in on the universal dimension that belongs to human beings, to their suffering, their joy, their fears, and their existence, the more it will be appreciated or rejected. The absence of valid cultural structures in Algeria forms a kind of stumbling block: generally, the public does not have access to the video creations of Algerian artists who remain disparaged and dispersed. Undoubtedly, video art has a more immediate quality than sculpture or painting. It is urgent to create cultural events in Algeria so that the local public can encounter this experimentation in real time and as it is conveyed by Algerian artists. Now that Le corps manquant has surmounted the body of exhibition’s absence, it is up to us to continue to resist the void by developing even more the ethical issues that are inherent to the creation of spaces and to attracting audiences for video art’s integration in Algeria.