About her artistic practice, deeply interconnected with her militancy and active engagement in the Tunisian art scene. 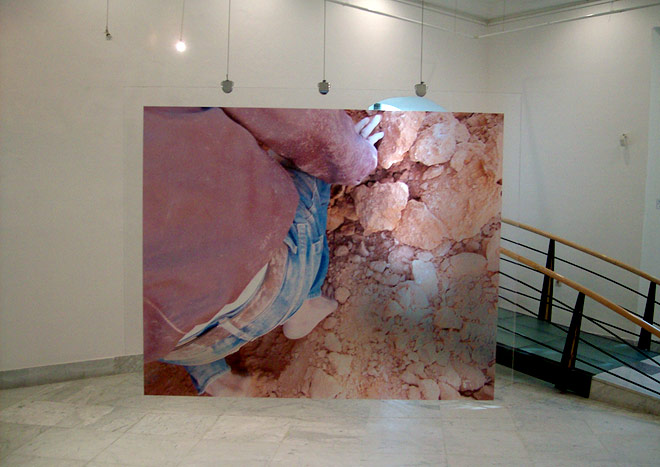 Having studied in Paris and Montreal, Sana Tamzini returned to Tunisia in 2003 determined to be involved in the cultural landscape of her home country. Her phenomenal energy and devotion as a cultural manager, facilitator, teacher, and curator are well known. Her artistic practice is viscerally interlinked with her militancy and active engagement in the Tunisian art world. Discreet, poetic and ephemeral in nature, her works primarily involve light installations, photography, video and performance with a profound socio-political grounding. She is devoted to working with spaces in situ, spotlighting their specificities following attentive research into the place and its past and present inhabitants or users. Tamzini's interests lie in geography, history, architecture, heritage in the widest sense of term and popular traditions.

Born in Kairouan which is now a UNESCO World Heritage Site, she has studied troglodyte habitat in particular and is invested in recording and transmitting any traditional custom or skill which is on the verge of extinction. Thus, she regularly pays homage to disappearing agricultural knowledge and craftsmanship in various projects. In 2013, she created an installation and a performance relating to the gathering of Esparto grass - a fibre used to make doormats and baskets - in the village of Takrouna; and in Chénini, she worked with Ammek Ali Sanoun, the last stone breaker in the area, to create a projection and performance in a grotto titled Khadem ala ijebel ib kadouma (Tackling the Mountain with a Pickax) after a Tunisian proverb. [1]

In 2010, she was artist in residence for 3 months at the Gyeonggi Creation Center in South Korea; there she focused on the local farmers and their crops, in her outdoor project entitled Land Memories in Daebudo, as well as on buried stories linked to the Japanese invasion. Tamzini commonly uses optical fiber as the main material in her installations. James Turrell is mentioned as a key influence. In 2009, the exhibition Proximity at the Museum of the City of Tunis, Kheireddine Palace, had brought her work in dialogue with that of Giuseppe Penone. In the accompanying text, curator and philosopher Rachida Triki wrote: "This same poetic osmosis between the physical world and human beings has been characteristic of Sana Tamzini's practice in the last few years. In a virtual manner, her works also highlight the close proximity between the imperceptible movement of light and spatiotemporal sensations."

During the day after the start of the Tunisian revolution in January 2011, in collaboration with Sonia Kallel and art students, Tamzini organized an action in Bir Lahjar, the Medina of Tunis. HORR 1 was a human barricade echoing the haphazard intuitive barrages that were put up around the old town to protect heritage and belongings from looting in a time of crisis. It also pointed to a perceived problem of a lack of communication and exchange in that present time, and denounced the historical privation of freedom of expression and movement in the public sphere in Tunisia.

Based on the strength of numerous curatorial projects as well as her teaching work in the École Supérieure des Sciences et Technologies du Design de Tunis, Manouba University, in April 2011 Sana Tamzini was asked to become director of the Centre National d'Art Vivant (National Centre for Live Arts) in the Belvedere Park in Tunis. This would not have usually been her route but, inspired by the Jasmin Revolution, she knew this was the place where she could actively improve the opportunities in the arts sector by giving space for creative experimentation. In Spring 2012 during the Printemps des Arts in El Abdellya in Tunis, artists were literally threatened to death by extremists. Action and resistance were even more urgent from then on. Her program concentrated on mixing popular and contemporary art forms, enabling emerging artists to take risks with their work, create in situ and relay their responses to their fast mutating society. Exhibitions and projects – such as Politiques/Politics [1], MAFOUL BIHI / Être AGI, Hadhirate/ Being Here – interrogated what it means to be a citizen and aimed to prove the importance and validity of the cultural sector within a wider context. She is a member of the Tunisian Association of Aesthetics and Poetics (ATEP) and opened up the Centre to exchanges with foreign agencies like the Goethe Institute, the Institut français, the Italian Cultural Institute, and UNESCO for instance.

As Director of the Centre, Tamzini participated in discussion groups concerning ancient sites and the need to find strategies to reconcile contemporary artists and Tunisian people with their tangible and intangible heritage which tends in general to be so badly preserved or exploited. These were organized with the network of European Union National Institutes of Culture (EUNIC), between various groups of world scientific and archaeological experts and major Tunisian players involved in sustainable development and cultural tourism last year. Within this broad regional program, she was asked to organize a contemporary art project, which became a four day event in the town of Sbeïtla and the adjacent UNESCO protected Roman ruins of Sufetula, dating from the 1st Century AD. She began working with local artists and artists from Tunis on the themes of memory, history, and identity. She discovered that the poet Marianne Catzaras had been visiting repeatedly for six years with students and soon roped her into the project which took the form of parades and music, caricatures, performances and an outdoor display of photographic works.

In June 2013, an exhibition of photographs of the Choucha refugee camp on the border with Libya was organized in collaboration with the UN Refugee Agency. The camp closed down that month which meant that the opening occurred at a highly sensitive time of protest against this decision. Tamzini endeavored to allow all the voices to be heard on this occasion and this democratic position was not approved of by ministerial authorities. She was "removed" from this job during the summer in a process that lacked professionalism and transparency. Tamzini has returned to teaching and battled to enable some of the programmed exhibitions at the Centre to occur elsewhere in Tunis, at the National Bardo Museum and the Cervantes Institute.

As president of FACT (Forum des Associations Culturelles en Tunisie, Connexions, German Commission for UNESCO) in 2014-2015, Tamzini represents Tunisian culture to UNESCO. She continues her involvement in the development of the cultural sector in Tunisia, encouraged as she is by the new constitution of January 2014 and by the recent appointment of Mourad Sakli as Minister of Culture. Her citizen actions in the public sphere are bound to intensify. Sana Tamzini's passionate enthusiasm and countless activities are only gaining in strength through strife and successes, hers is most certainly a voice to listen out for and support. 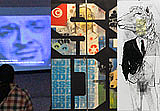