Rasheed Araeen: Before and After Minimalism 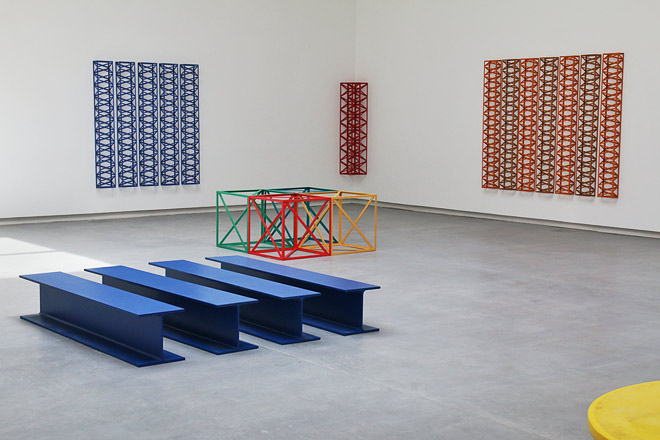 Rasheed Araeen: Before and After Minimalism presents sculptures, paintings and drawings created during the more-than 50-year career of this influential Pakistani-born British artist.
The exhibition traces his evolution as a painter in Karachi to his shift towards Minimalism in London and ultimately to his international recognition and achievements as a post-Minimalist sculptor.
Trained as a civil engineer, Araeen is best known for his formal, geometric sculptures often created from simple, sometimes industrial materials. Eschewing traditional sculptural hierarchies and compositional concerns, Araeen’s works are informed by his social and political convictions.
Founding editor of important critical journals including The Third Text, Araeen has been at the forefront of the politically charged discourse between artists, institutions and audiences. This first major exhibition of the artist’s work in the MENASA includes early paintings and drawing, documentation of participatory and performance works, seminal sculptures from the 1960’s and a new sculpture specially commissioned for Sharjah.

Hoor Al Qasimi: I want to ask first about you joining the Black Panther Party. Can you tell me about that?

Rasheed Araeen: In the early 1970s I went through a bad period despite the fact that I had been living and working in London since the mid-1960s. I was not getting any help from the institutions; private galleries didn’t want to know me, so I was in a dilemma if not disenchanted. I had some friends who talked with me about the Black Panthers. Then I read a book that made me realise that I was caught in a new colonial situation. So I had a solution to this new situation that would be political: I would give up my work to join the Black Panthers and work in the streets in Brixton, and in the North.

HQ: What happened? What made you come back?

RA: The internal contradictions within the group. Some people were fighting with each other and by the end of the 1970s the whole thing collapsed and the Black Panthers were dismantled.

HQ: And then you started the journal The Third Text?

RA: By then I began thinking about how I could continue to make works of art. I had a close friend who was very well known named David Medalla and we talked a lot about art and politics. We joined together in opening Artists for Democracy. That was during my extreme political phase.

HQ: How did that influence your artwork?

RA: It did a lot particularly in the 1970s. In 1975 I wrote a Black manifesto called The Black Phoenix in which I outlined what could be the future of art in the Third World.

HQ: What do you think about the situation now in comparison to what you were thinking then?

RA: It has changed tremendously. In the 1970s art establishments, whether they were public institutions like Tate or other influential organisations and galleries, they did not want to know about these political things.

HQ: When did this change?

RA: Things began to change in the 1980s because of two developments, the first being the beginning of multiculturalism in Britain as well as in America. Institutions began to implement affirmative action policies and they began to promote non-white artists and academics on this basis. Many people were admitted to universities in America and Britain even though some of these institutions were simply ticking the boxes on admissions applications to meet a quota. The second thing that happened during this period was the globalisation of capital and correspondingly the globalisaton of the art market. The art market wanted more than they could get from Europe and America. Because of this expansion, institutions looked beyond Europe towards Africa and Asia.

HQ: Can you tell me how your exhibition The Other Story at the Hayward in 1989 came about?

RA: I had been struggling with the Establishment not only for myself but for all the non-white artists living here in Britain. Wherever I went I got a cold shoulder; these institutions were not interested in our work. Then, by the end of the 1980s the changes I mentioned earlier were well underway. The Arts Council had instructions from the Department of Culture that it should spend a measurable portion of its budget on so-called ethnic artists. It was in this atmosphere in 1987 that I went back to the Arts Council and received a positive response.

HQ: The exhibition we are doing in Sharjah is titled Before and After Minimalism and we show your very early work, your minimalist work as well as new works. Can you describe how your work has shifted into minimalism and beyond that?

RA: The way I became an artist is very strange and most unusual. I never wanted to be an artist. I became an artist because art pushed me into it. Before I came here to Britain there were two elements that had already emerged in my work. The first is the helical movement or vertical movement in my work, which is very similar to the movement of a double helix. The other element was my study of boats as abstractions and the essential shape of the triangle that emerged as a result. So there were two things present very early on in my work: triangles and vertical movement. When I came to London, I wanted to forget everything I did in Karachi because I realised after seeing all the work here and in Paris that I must start afresh; I needed to think about what I could do in the context of what I had seen and experienced. I became fascinated with structures and decided I should become a sculptor despite the fact I had no training in sculpture. I couldn’t even handle the tools. Instinctively I hit upon the idea of sculpture as a symmetrical structure.

Several years later I developed the lattice structure. Upon examining the structure of the lattice you have everything seen in my work: triangles and vertical movement. That is the connection between the work I did in Pakistan in the early years and what I have developed since then. That is why I call the exhibition Before and After Minimalism.

HQ: What happened to your work after minimalism?

RA: I broke the minimalist structure in a work called Zero to Infinity and from that I made two other works after minimalism.

HQ: How do you think the works relate to each other?

RA: They relate to each other through the development of the idea, not through form. Form keeps changing but the idea is the same and is always there.

HQ: There is also an interactive element in your work with these new structures. What was the idea behind these pieces?
RA: The idea was the breaking off of the rigid symmetrical structure of minimalism. The result became a process that could be carried out by people viewing and engaging with the structures.

HQ: Is this the first time you have exhibited your Karachi works together with your minimalist structures?

HQ: How did you choose these colours for the structures in Sharjah?

RA: The title of one of the pieces is called Shurbati and it is inspired by the colours of sherbet, a sweet and cold refreshment that we drank during childhood in the Middle East. I created the orange colour in 1973 and then I abandoned it. I came back to it in 2013.

Rasheed Araeen:
Before and After Minimalism 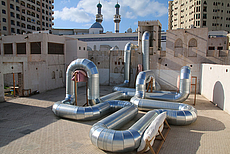 Photo tour through the exhibitions of the Sharjah Art Foundation, parallel to the March Meeting 2014