Artists' Anti-Drone Campaign in Pakistan uses a giant photo of a child to challenge drone operators and raise awareness about civilian casualties. 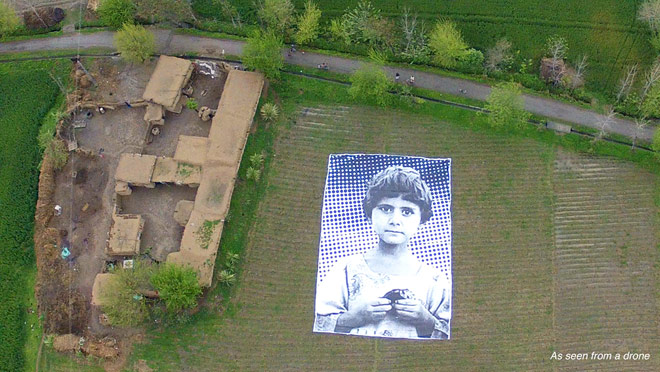 When the street artist known as JR received the Ted Prize in 2011, he created Inside Out, a global participatory art project that allows people worldwide to share their portrait and make a statement for what they stand for, share untold stories and transform messages of personal identity into works of public art.

Under the title #NotABugSplat, an artist collective in Pakistan and the US has now started an Inside Out project in the heavily bombed Khyber Pukhtoonkhwa region of Pakistan, where drone attacks regularly occur.

With the assistance of highly enthusiastic locals, the artists installed a giant portrait of a Pakistani child in a field, with the hope that this "will create empathy and introspection amongst drone operators, and will create dialogue amongst policy makers, eventually leading to decisions that will save innocent lives." It is also designed to be captured by satellites in order to make it a permanent part of the landscape on online mapping sites.

According to the project's information, since 2004, drone strikes in Pakistan have killed an estimated 3,000+ people. While some of these were high-profile targets, a large number were civilians. Including 160 children. The people who operate the drones describe their casualties as "bug splats", since viewing the body through a grainy-green video image gives the sense of an insect being crushed.

Artists' Anti-Drone Campaign in Pakistan uses a giant photo of a child to challenge drone operators and raise awareness about civilian casualties.