Maha Maamoun: The Night of Counting the Years

The Night of Counting the Years. Review of her first institutional solo exhibition, Fridericianum, Kassel, Germany, 11 May - 17 August 2014. 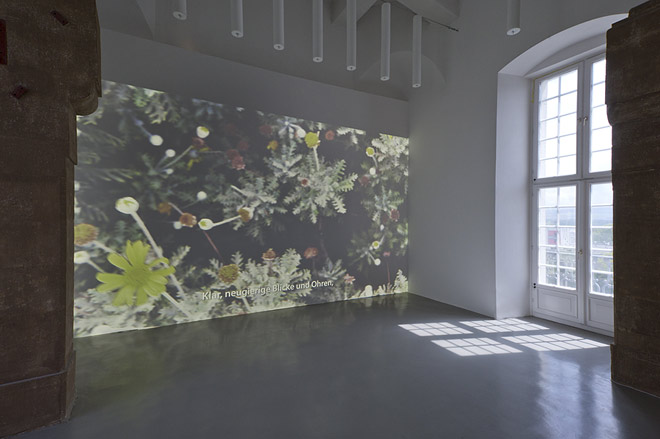 The Night of Counting the Years – the title of Maha Maamoun’s first institutional solo exhibition – is borrowed from the eponymous film by Shadi Abdel Salam, which is frequently praised as one of Egyptian cinema’s most important films. The film’s plot is set in 1881, shortly before Egypt fell under British colonial rule, and tells the true story of a clan in Upper Egypt that long tended a mummy’s tomb and now plunders it to sell off the artifacts on the black market for antiquities. After long disputes, a clan member decides to inform the authorities and to reveal where the mummy is hidden. In the film, the neglected artifacts of ancient Egyptian civilization symbolize the conflict-ridden search, still continuing today, for an authentic national identity.

The question of identity and symbolic representation, especially against the background of film history, stands at the center of Maha Maamoun’s artistic work. The presentation on four floors of the tower of the Fridericianum shows four video works in chronological order – in contrast to Maamoun’s films themselves, in which time seldom unfolds linearly. The overture is Domestic Tourism II (2008) – a montage investigating the presence of the Pyramids of Giza, Egypt’s landmark and emblem, in Egyptian film from the 1950s to today. Maamoun is interested in how and when the pyramids appear as a backdrop and in the extent to which its instrumentalization or politicization by the various political regimes becomes visible.

Disregarding the chronology of the film material, Maamoun cut the individual scenes together anew in the form of an upside-down time-pyramid. The viewer sets off, time travelling through Egyptian cinema, from the 2000s to the 1950s and then back to 2006 – and thus just before the time of the revolution on Tahrir Square, Mubarak’s ousting, and Mursi’s presidency. Much attention goes to films from the 1960s and ’70s, the heyday of the middle class in Egypt, as in Europe. The film’s aesthetics as well as the protagonists’ cars, clothing, and hairstyles hardly differ from European films of the same time – except that here in every shot the pyramids serve as a backdrop for grand emotions. They seem to appear whenever essential questions of national or personal identity arise and in moments of decision or liberation. Above all, the old and the modern Egypt collide in these scenes. In tourist guides and on postcards, the pyramids are presented as sublime monuments in the desert; but the films clearly show their omnipresent proximity to the cacophonous chaos of Cairo, the metropolis with millions of inhabitants.

One floor up is more film history. One quickly recognizes the iconic images from Chris Marker’s La Jeatée (1972): the man with the plugged-in eye mask lying in a hammock. But this is not original footage from Marker’s canonic film classic, which was composed entirely of still photos. Maamoun had an Egyptian actor restage the scene and also gave him a new sound track. The original showed the memory of a woman’s face that sends the protagonist – a survivor and prisoner of war in a final world war – on a forced time journey, first into the past and then into the future before he returns to the moment of his own death; here, the off-screen voice narrates an excerpt from Mahmoud Osman’s contemporary science fiction novel The Revolution of 2053: The Beginning (2007). Also this is the depiction of a dystopian vision: in a decadent ceremonial act, a new elite takes over the Giza Plateau and with it Egypt’s cultural heritage, plunging the country into social ruin. By means of complicated calculations based on the presidency of his own time (before the revolution of 2011), the author traces this event, which in the novel precedes the fictional revolution of 2053, back to the year 2026. 2026 is also the title of Maamoun’s film, which she created in 2010 – one year before the Egyptian revolution. Like Marker’s film, in which time does not proceed linearly but forms an inescapable loop, this journey through time, composed of different pictorial and textual sources, takes us back to a zero hour where the future seems to repeat itself.

Night Visitor: The Night of Counting the Years (2011) again takes recourse to found film material. But this time not from the big screen, but from cell phone films that hobby filmmakers posted on YouTube on the Internet and put at the artist’s disposal for her work. It is (largely unsteady, blurred, or underexposed) footage of the storming of the state security headquarters in Cairo and Damanhur, two months after Mubarak’s fall. Maamoun has put together the individual sequences from the various cell phone films to simulate a filmic chronology: starting from the nocturnal break-in into the building, a tour of the security headquarters is suggested, while the viewer’s gaze falls on luxury goods, portrait photos lying on the floor, telephone wires, files, and documents. While the second part of Maamoun’s title alludes to the aforementioned film by Shadi Abdel Salam and the conflicts it depicts, the first part, Night Visitor, reverses the roles of state power and opposition: in the past, the political activists were "visited" and arrested by state security agents, while now the demonstrators are the nocturnal intruders.

Shooting Stars Remind Me of Eavesdroppers (2013), Maamoun’s most recent film, shown in the top room of the tower, was shot in al-Azhar park, a green oasis in the heart of Cairo, where young lovers, in particular, meet for a little togetherness. The idyllic scenes are not staged; the camera observes the couples sitting under trees from a safe distance, through the rustling foliage and cattle egrets. Snippets of conversation in Arabic can also be made out. A fictional text by the artist is heard as a voice-over. In it unfolds an argument between two lovers, in part lovingly joking and in part seriously indignant, about whether secretly eavesdropping on each other is a violation of privacy and a breach of trust, or rather a sincere search for intimacy and authenticity. What is authentic? Where precisely is the truth hidden, and how legitimate is it to approach it? As in Maamoun’s previous works, where the visual language of the cultural imaginary is examined for possible ways of representation of actual coherencies, also in this so laconic and poetic film, symbolic representations collide subtly with each other, and intimate confessions can be transposed to broader societal and political situations. The interplay among these four films displays the unpretentiously presented density of Maha Maamoun’s work.

Art historian, curator, and critic, based in Berlin, Germany.

Maha Maamoun:
The Night of Counting the Years