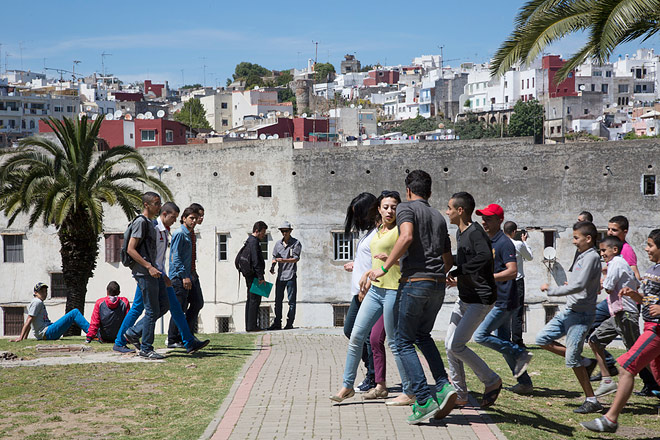 From 15 October 2014 to 25 January 2015, the event Le Maroc Contemporain is held at the Institut du Monde Arabe in Paris. This event brings together 700 artists from all disciplines and integrates an eponymous exhibition gathering 300 works by more than 80 Moroccan artists. This is the largest exhibition ever organized by this institution, whose mission is to foster the relationship between France and the Arab world: art and culture as a tool for development and cooperation in a very political place.

Le Maroc Contemporain crystallizes a set of questions going far beyond visual considerations. Indeed, the exhibition at the Institut du Monde Arabe is the counterpart to the exhibition Le Maroc médiéval, un empire de l’Afrique à l’Espagne, which takes place at the same time at the Louvre Museum. In Marseilles, from March to August 2014, the MuCEM hosted an exhibition of antique bronzes from Volubilis. Finally, Fall 2014 in Paris will see a genuine Moroccan season with four other artistic events honoring the Kingdom.[1] Far from being accidental, this infatuation with Morocco was orchestrated in high places in 2012, when King Mohammed VI positioned himself as a major patron for the new department of Islamic art at the Louvre, donating 26 million euros.

The highly respected curator Jean-Hubert Martin, internationally known for his exhibition Les magicians de la terre in 1989, was given the difficult task of selecting the artists for the show; he was assisted by Moulim El Aroussi, a philosopher and the former Director of the Education Committee of the School of Fine Arts in Casablanca, and by Mohamed Metalsi, Doctor of Aesthetics and Director of the Institut du Monde Arabe’s Cultural Department. For more than a year, the trio toured in Morocco, meeting artists in places rarely visited for this purpose, like the Oriental region and the South of the country. Their curatorial approach focuses exclusively on artists living today in Morocco, mingling figureheads such as Farid Belkahia, who died a few weeks before the show, Mohamed Melehi, and El Khalil El Gherib with emerging artists such as Said Afifi, Leila Alaoui, Younis Atbane, and the photographer Merji. Only one foreigner is in the picture: the Belgian artist Eric Van Hove, who became in a few months the darling of the Moroccan art scene with his work V12 Laraki, a sculptural engine created with the support of a myriad of Moroccan craftsmen. Designers are also present in the exhibition, with some discoveries like Lahcen Iwi, who offers a medieval Gothic dining table made of tires.

The voluntarily wide choice of artists and the principle of non-hierarchical presentation demonstrate the desire to show the richness and diversity of contemporary Moroccan creation exhaustively to the French public. A perilous exercise that results in a thematic scenography: Fantasize / Pioneers / Organise, combine, and destroy / Sufism / Emigration / Interrogating conventions / Embodying / Questioning beliefs / Responding to Arab Springs. These "moments" are punctuated with beautiful encounters, usually owed to artists already identified such as Yto Barrada with the 16mm video entitled A Guide to Trees for Governors and Gardeners. The film shows the journey of official vehicles on an ochre ground’s model. When the convoy passes, red carpets are automatically rolled out on the floor, palm trees emerge from the ground, Moroccan flags wave in the wind, and dilapidated house façades tip up like magic to make room for freshly painted walls. No trace of a human being in this artificial horizon that echoes a Moroccan reality adapted to embellish a few hours before each royal appearance.

Further, Younès Rahmoun presents the work Zara Zoujaj, which made the trip from Mathaf in Qatar to the French capital. "It's wonderful, it looks like a thousand eyes watching us. I would stay here all day!" exclaims a little girl lying on the ground, absorbed by the soothing light pulsing from 77 glass lamps hanging in the form of flowers from the ceiling of a pyramidal structure that one can enter after taking off one’s shoes. The artist designed each unique flower with the help of glass artisans from the International Centre for Glass Art in Meisenthal in eastern France.

Monumental, too, is the work of the young Amine El Gotaibi that, despite significant financial support from the Arab Fund for Arts and Culture and the Institut du Monde Arabe, still awaits its moment of glory. A freezer located on an impressive boxing ring whose ropes echo the colors of the Moroccan flag is supposed to produce the iced body of the artist in an industrial rhythm. Unfortunately, for technical reasons, it does not work yet several days after the opening.

Finally, on the ground floor, the work of the young artist Randa Maroufi hits the spot. Graduate of the National Institute of Fine Arts of Tetouan and the Fine Art School in Anger, France, the young woman is currently studying at the Fresnoy National Studio of Contemporary Arts. Scenes of street harassment are played out in photographic prints. The artist says: "I extracted these images from the Internet where I just typed ‘sexual harassment’. I then asked boys from the street to reproduce these scenes. They were extremely embarrassed to engage in behavior they nonetheless engage in every day. My work questions our relationship to the images, the way we consume them, and the awkwardness of our actions. It goes far beyond the question of the status of women to which it is sometimes reduced."

It is an impossible task to review the 300-plus works that make up this sometimes uneven exhibition, due to the diversity of the featured profiles. However, some major artists are noticeable by absence, like Hassan Darsi and Fouad Bellamine. During a ranting interview he gave on September 13, 2014 for the 360ma online magazine, he explained the reasons for his refusal: "We are going through a process of democratization in Morocco and we have to show clarity. Unfortunately, in this matter, an immaturity has been shown that is absolutely not compatible with today's Morocco as I know it. It’s like organizing an exhibition of writers in which all the young who write in newspapers are shown next to important writers like Chraïbi or Tahar Ben Jelloun. This is not normal. Imagine France putting up a show in Venice, Basel, or in any world capital and the artists of Place du Tertre or Montparnasse asking, ‘Why do we not have the right to represent France?’ (...) When you are a professional, you can know that Morocco has not given more than 4 or 5 names in the last fifteen years."

If such a remark is justified, the exhibition still acts as a springboard for many young or older Moroccans artists who are struggling to produce and promote their work. And if, like Bellamine, one hopes that such an important show will one day be held in a prestigious museum devoted to art in general and not only to the art of the Arab world, Le Maroc Contemporain is still a strong example of friendship between France and Morocco, for the sake of political stability, in a time troubled more than ever.