Intervening Space: From The Intimate To The World

From The Intimate To The World. Six Algerian artists. Review of the exhibition presented at The Mosaic Rooms, London, 16 May - 28 June 2014. 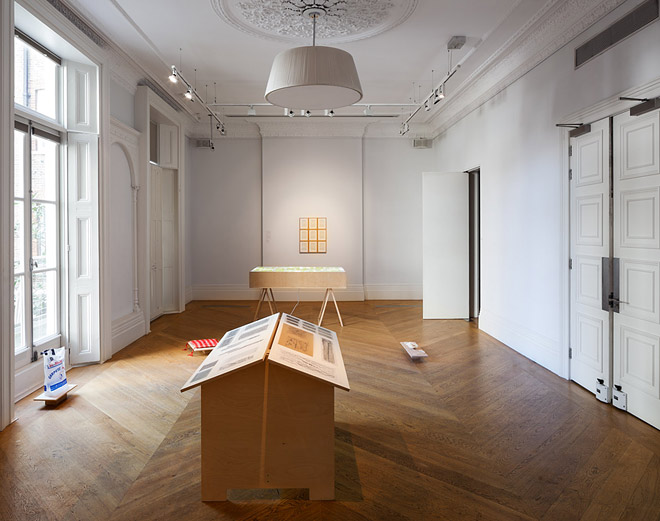 When artist Zineb Sedira started up aria (artist residency in algiers) with a pilot project in 2012, one of her aims was to increase the visibility of Algerian artists internationally. Six Algerian artists - Amina Menia, Atef Berredjem, Fayçal Baghriche, Hanam Benammar, Massinissa Selmani, and Sadek Rahim - are now together presenting their works at The Mosaic Rooms in London in the exhibition Intervening Space: From The Intimate To The World, organised by curator and aria project coordinator Yasmina Reggad.

The concept is sufficiently wide to give the artists an enormous scope for reflection - which turns out to be both the strong and the weak point of the exhibition.

Four artists are shown together in the main exhibition space of The Mosaic Rooms, and the joint presentation is done beautifully. Just outside the doorway, before you enter the room, a slightly tattered and presumably handwoven basket lies on its side on a small wooden plinth. It is part of the object and sound installation Prenons un air dégagé: We already had no history (2014) by Hanan Benammar, which is further dispersed throughout the room itself. The ordinary objects - which also include a purse, a plastic bag, and a seat cushion - presumably hail from Algeria. They emanate sounds in turn, some more repetitive, some more short story-like. It takes the press release, however, to find out that the work 'recounts and performs possible and plausible fictional narratives from [the artist's] own biography', as even in an otherwise quiet room it is almost impossible to hear or understand the words spoken, and there is a strange disconnect between the description and the actual work.

Massinissa Selmani's installation Diar Echems (Maisons du soleil) (2013-2014) on the other hand, is poignant in its simplicity. A light box table with the outline of a football pitch drawn on its white surface is filled with yellow post-it notes that ostensibly each represent an actual dwelling. Judging by the handwritten accounts on each paper of the limited square meters, disproportionate amount of people, and record of sparse belongings, it is clear we are looking at a representation of shanty houses, a desperate response to a housing crisis. Neatly framed on the adjacent wall are copies of a press report on the 2009 confrontations between youths and security forces in the Algiers neighbourhood of Diar Echems, each mostly blanked out with just a few sentences visible. They hint at a story of disenchantment, and the widening gap between the 99% and the few haves at the top. It is a story we are all too familiar with, but which takes on a different meaning coming from a region which has seen such disengagement turn into actual revolutions over the past few years.

The other end of the room is taken up by Sadek Rahim's new and site-specific installation Topophilia. An Etude (2014). Consisting of a large real-time wall projection, two shelves with various castings, and a viewing table with different rubbings on paper and transparencies, the work is a new commission the artist made while in residence at The Mosaic Rooms in response to its typically London Victorian space. Topophilia literally means 'love of a place', but can also be interpreted as a sense of cultural connection or identity. It is something artists of today - particularly those who are from non-Western backgrounds - often have to deal with to find a place in the international art world. Reveal your local, but exist in the global. By exhibiting a study for the love of a place he is only temporarily engaged with, Rahim is drawing attention to the fact that there are spaces in between, that for some transitory artists of today, the local can just be where they happen to be.

A darkened side-room holds Fayçal Baghriche's installation Half of What You See (2010). Taking its cue from Benjamin Franklin's 'believe none of what you hear, and only half of what you see', the room contains a polystyrene ball that turns on its axe, with just a small mirror attached to it. A light shining on the ball throws a large shadow that rotates on the surrounding walls. The visual easily holds the attention, but is not enough to warrant much more curiosity.

In the downstairs room of The Mosaic Rooms, Amina Menia's Enclosed #0 (2013) investigates the curious history of the large city-centre 1928 public monument erected by the French to commemorate the 4,500 dead of Algiers of WWI. Seen as a symbol of colonial oppression almost 50 years later, it was transformed at the request of the mayor of Algiers by Algerian painter M'hamed Issiakhem. Rather than destroying it, Issiakhem and a team of artists encased the entire sculpture into a new concrete sculpture, the Monument to the Martyrs. With newspaper clippings, postcards, photographs and a film interview with one of the artists working on the 1970s sculpture, Menia elegantly encapsulates the complicated history of colonialism, independence, and post-independence. Three photographs showing the current state of the monument, with the 1928 one showing through the cracks that have appeared over time in the concrete, are particularly telling.

The sixth and last work shown is a double screen video installation encapsulated in the floor by Atef Berredjem. Filmed from above from two slightly different angles Continuum (2014) shows a street corner in Algiers with mostly cars moving from one screen to another as they pass by. An accompanying quote by Larbi Ben M'kidi (1923/1957) handwritten on the wall states 'Throw the revolution into the street and it will be born aloft by the people'. Despite this lofty statement, and the street-origins of many revolutions, both recent and in the past, the videos show us that in fact, the status quo continues.

All artists shown are internationally active, although they have mostly not exhibited in London before, and it shows how organisations such as aria and spaces such as The Mosaic Rooms can have a real impact. A downside to organising group exhibitions that are in first instance based on nationality alone is that it can feel forced to find other common ground to justify their grouping, and in that respect Intervening Space: From the Intimate to the World fails to live up to its full potential. Having said that, the individual highlights are more than worth a visit to The Mosaic Rooms.

Intervening Space:
From The Intimate To The World 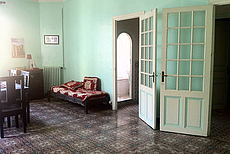 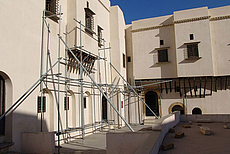 Projects and urban interventions as poetic critiques of the socio-political situation in Algeria. 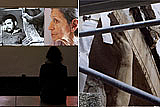