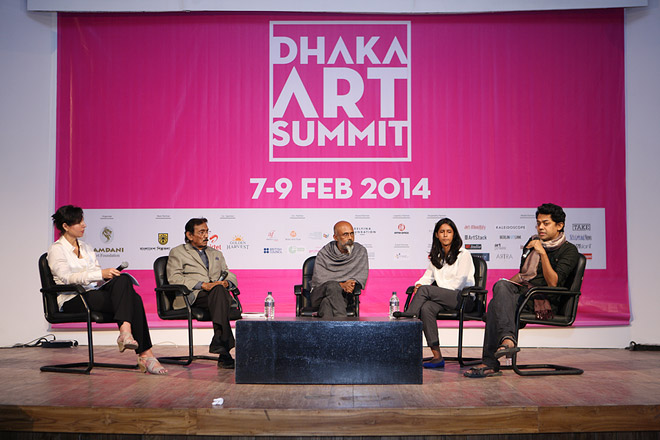 There has been some confusion around the use of the noun ‘summit’ vis-à-vis art events in south Asia. In an earlier avatar the Delhi-anchored India Art Fair was known as the India Art Summit. Confusion over the leanings of the event caused the organisers to soul-search and subsequently settle for the unambiguous ‘fair’.

A healthy skepticism was part of my mental makeup as I was en route to the second edition of the Dhaka Art Summit (DAS). There had been some murmurs. Was it a fair? Or was it a not-for-profit? Then the word arrived; there were fair booths but galleries had not been charged for them. Curiouser and curiouser.
Upon my arrival I learnt that by employing a distinctly hybrid format the Dhaka Art Summit — produced by the Samdani Art Foundation, with curator Diana Campbell Betancourt as artistic director — had successfully moved out the shadow of the recent debate to create a vibrant three-day arts festival.
Curated projects, fair, art award, symposium, children’s workshop, performance art, videos and film programme, public art and collateral events. The Summit carefully ticked all the boxes and to the credit of the organisers and the curator, it did not seem forced. With its cheek-by-jowl set up the Summit is an acknowledgement — if ever there was one needed — of the broad economy of art, where everything rubs up against everything in a fairly inevitable way.

Over and above everything else though, I was mighty chuffed to be visiting Bangladesh. The second neighbouring country I have visited after Nepal. The unstable political conditions in south Asia ensure that visiting countries across the border from India is not a regular undertaking.

Taking place at the Bangladesh Shilpakala Academy (National Academy of Fine and Performing Arts), Dhaka, the initiative was a high-octane visibility exercise for south Asian art practices. The inaugural discussion, Cross-Generational Panel: Where have we come from and where are we headed?, was anchored by four generations of Bangladeshi artists — Syed Jahangir, Wakilur Rahman, Naeem Mohaiemen and Ayesha Sultana — and served as an ideal introduction to the Summit. Sultana is also the winner of this year’s Samdani Art Award, initiated in collaboration with Delfina Foundation, London. Coming back, all panellists on board the opening conversation were united in their call for greater inclusivity, vis-à-vis the local and international art scene. As such, their call found some resonance in the newfound bi-lingual — i.e. English and Bengali — thrust of the Summit.

While the first edition of DAS was exclusively English, this time around bi-lingual texts accompanied the 14 solo projects curated by Campbell Betancourt. If the current trend holds, then the next year should bring in more bi-lingual texts and perhaps even a bi-lingual catalogue. While translating continues to be an ever-challenging endeavour, there’s humour to be found in the process; in an early translation of the curatorial note, ‘Runa Islam’s films’ somehow got transformed into ‘Islamic Films’.

Translation also formed the kernel of the Bangladesh-born and London-based Islam’s 16mm film Untitled (After the Hunt) , 2008. In it, Islam created a nesting doll narrative using a photograph from her grandfather’s album to probe the complexities of memory as they get translated across time.

The granularity of 16mm also worked perfectly in favour of the rugged sandblasted landscape of Lida Abdul’s powerful sequence of four videos. In White House, 2005, What We Saw Upon Awakening, 2006, Brick Sellers of Kabul, 2006 and Clapping With Stones, 2005, the artist explores the ruins of Afghanistan as a regenerative source.

For his solo project entitled Shokol Choritro Kalponic [All Characters Are Imaginary] , 2014, Mohaiemen employed the daily newspaper format to create a sort of public address directed towards the Bengali readership. The project imagines a Bangladesh where the communists survived the 1970s manhunts and came to power by 1979.

While the futuristic project, set as it was in 2024, might seem too simply idealistic when seen in relation to Mohaiemen’s multivalent practice, some sleuthing revealed incorporation of nuanced complexities that distinguish Mohaiemen’s work. His printing of Sultana’s Dream would be a case in point. Written by Begum Rokeya, Sultana’s Dream is a classic of Bengali science fiction and one of the first examples of feminist science fiction. The artist’s newspaper endeavour was aimed at reaching the broadest possible public and if the fast depleting stocks of the newspaper were anything to go by then things went well according to plan.

Bengali was also the language of choice for Raqs Media Collective’s Meanwhile Elsewhere, 2014. In this public art initiative, which appeared and remained on hoardings across the Bangladeshi capital for a month, the Collective continued their engagement with time via the horological motif of the clock-face, where wordplay replaces the time of day. Clues to the Bengali wordplay could be teased out from earlier conceptualisations of the motif, wherein the Collective employed moods such as anxiety and ecstasy in place of time.

Thus far in south Asia, the surge of (interest in) public art has rarely been supplemented by programmes that examine the presence and role of such practices. As the call for public art gets louder, now more than ever before one feels the need for programmes, which will observe and/or study the public space and practices of this mind-bogglingly diverse region.

Riyas Komu played the role of the unlikely observer in his video work Last Wall, 2013-2014, the protagonist of which is the producer of a kind of public art. Exhibited as part of Citizens of Time, curated by Veeranganakumari Solanki, the evocative video followed a vagabond as he compulsively inscribed the walls of the artist’s neighbourhood in a mythical language.

In Bombay the space for public art is negligible, this however, does not appear to be the case with Chittagong, where according to the New York and Dhaka based Mohaiemen such practices transpire outside the glare of the global contemporary arts circuit.

In Cheragee Pahar: Far from the Madding Crowd — his April 2013 entry for the Guggenheim blog — the artist writes about Chittagong: "…the city’s position in the periphery has made it more open to experimentation. Rajdhanite khub antorikota’r obhab (there is a lack of sincerity in the capital). It’s an overused complaint, but somewhat true. At many Dhaka shows, a sense of wonder has been lost. People are increasingly present not to lose themselves in a sensory experience, but to figure out the angles: Is this the new thing? Who is funding this? What’s in it for me? Brains on overdrive with no time for contemplation."

While the Summit has already done a notable job, in order for it to grow along a trajectory that is not unwieldy it would be vital to include these fringe practices in its future editions. It must, however, be pointed out that the landscape of Chittagong, Bangladesh’s second largest city after Dhaka, asserted its presence in Shumon Ahmed’s Metal Graves, 2009.

In this suite of elegiac photos, the Dhaka-based artist documents the fate of beached freighters as they rust away in the waters of Baro Aulia, a shipbreaking yard, not far from the legendary Chittagong port. The work was shown as part of B/Desh; curated by Deepak Ananth this engaging exhibition explored the plural realities of Bangladesh.

The Bengal Famine of 1943 is one such reality of the subcontinent. It gets depicted with great pathos in the prints and ink drawing of Chittaprosad Bhattacharya (1915–1978), a redoubtable modernist and a prime disseminator of Leftist ideology. Within the gallery display enclosure, where the focus was predominantly on contemporary art, these works on display at Delhi Art Gallery were undoubtedly one of the more poignant.

Another notable was Anindita Dutta’s Life Line I. Exhibited by Latitude 28, New Delhi, the photograph depicts a performative drawing on wet clay. It is a careful and yet playful coming together of many media and ideas, including those of womanhood.

The readers should feel free to investigate the slightly spurious claim I made earlier in the piece regarding my ‘visiting Bangladesh’. Despite my enthusiasm, during my whirlwind trip — typical of a sort of sketchy nomadism, which epitomises contemporary art industry — I spent most of my four days cocooned in the Shilpakala Academy. The speed of my trip was echoed in the speed and brevity of the Summit.

The dialogical is important to art; conversation as substance is key. In the future, it would be critical for the Summit to also focus on knowledge production and infrastructure development outside the three days of the Summit if it is to foster a deeper dialogue.

One possible way would be to encourage networks such as South Asia Network for the Arts (SANA). Members of SANA include Triangle Network partners, Britto Arts Trust (Bangladesh), Vasl Artists’ Collective (Pakistan), KHOJ International Artists’ Association (India) and Theertha International Artists’ Collective (Sri Lanka). Significantly, members of the group were present at the Summit where they launched the SANA Book, which marks the culmination of a six-year project of exchange in a region that is more often than not held hostage by borders.

If physics is to be believed then the very act of observing changes that which is being observed. In the sciences the ‘observer effect’ is undesirable and kept under check by use of sophisticated instruments or observation techniques. In contemporary art, however, these instruments and techniques vary widely and include subjective notions of intuition; the observer effect here is unavoidable, even desirable. All eyes are now on the Summit and this can only be a good thing.

Curator at Khanabadosh, a Bombay-anchored itinerant arts lab she started in 2012. Since January 2014, she is a research associate at Zurich University of the Arts' Institute for Contemporary Art Research.