The Artist’s Responsibility, or Freedom is the Critical Distance You Take

The Artist’s Responsibility, or Freedom is the Critical Distance You Take. Review of Burak Delier's exhibition at Iniva, London. 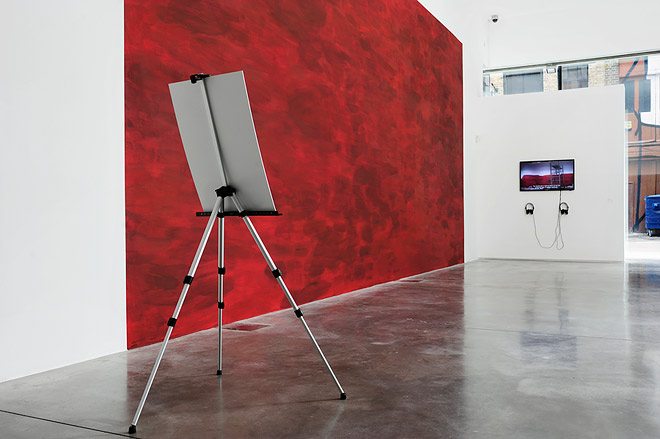 Monopoly used to be the most popular game when games used to be played on boards, not on consoles; it made us familiar with the streets of financial centers like London or New York. Thanks to Monopoly ‘that makes everyone real estate kings though in a game’ we learned about business streets such as Pall Mall or Whitehall. This was 20 years ago, when Nescafé jars were brought to Turkey in luggage. After local elections in Turkey, Nayat Karaköse has made a critical remark that goes beyond the populist and polarized interpretations, underlining a new generation fond of pleasure and stability that spends most of its time in shopping malls and stores carrying global luxury brands. The first known source of Monopoly is the American Lizze Maggie’s ‘The Landlords Game’ (patented in 1904) that aimed to show how rent mechanisms made renters poorer while making landlords richer. The popular circulation of this political and complicated game was delayed, but Monopoly was played in different formats in the meantime. It is possible to see new campaigns of Monopoly in any London McDonald’s branch. Is it just a coincidence that the Turkish translation of Monopoly was released in 2010, when the pleasure-and-stability generation boomed with the economic crisis in the background, the year when Istanbul was one of the three European cultural capitals?

On my way with an artist friend from Sydney to Burak Delier’s exhibition Freedom has no script at Iniva, we moved on the north-east axis of London, which has been under reconstruction for who knows how long, and talked about Monopoly, Risk, and the chillingly real Machiavellian TV drama House of Cards that speaks of taking higher risks as a must if one wants to become more powerful.

In Freedom has no script, Burak Delier draws a different picture of this new pleasure- and stability-loving Turkey’s forms of operating and of relation. Another important matter is that this scenery is drawn specifically in London, one of Western media’s fortresses that insisted on seeing Gezi as a middle-class uprising that started from one day to the other. The business centers and high-rises that the artist used to restage the white-collar scenes are always invisible to anyone from global art circles.

Iniva (Institute of International Visual Arts) is a niche institution in London with a special place; it has a wide, independent, and colorful political perspective built on a cultural studies way of thinking. Burak Delier has won an artistic production grant that Iniva has awarded for the first time. With director Tessa Jackson, the artist has selected works from his last 3 years of production, from Collector’s Wish to Crisis and Control, to be shown with his new white-collar analysis Songs of the Possessed, whose production he owes to the grant. The artist has personalized his recent working process with an open-question-based experiential research, focusing on the relational gestures of capitalist structures within capitalism and with individuals, and he succeeds in nourishing his work from the sometimes blind-ended discussions among art, politics, and activism.

As it may sound complicated, this sentence’s gist lies in the tension between Homage to Balotelli’s Missed Trick, the artist’s mobile phone notes installed in a viewing box that greets the audience in the entrance, and Crisis and Control, in which white collars trigger their crisis while trying to keep it under control. Delier exemplifies how production and relation models of the art world affect him as an artist in a series of notes from 2012 and 2013; and he experiments with some of these notes, for example by connecting with local context, producing experiential works in Crisis and Control. He also implies that his precarious experience as an artist is not different from the portraits of white collars he worked on. Thinkers like Marion von Osten and Maurizio Lazzarato writing on art and precariousness note: this definition of continuous freedom necessitated by the spirit of self-realization and limited by the amount of risk taken turns into a very effective form of bio-political control, because it makes freedom dependent on continuous self-capitalization and shapes it as the need to be creative all the time. However, as the artist suggests in his exhibition title, there is no script to impose freedom.

The playful deal signed between trader and artist is reminiscent of Maria Eichhorn’s Aktiengesellschaft, produced for the documenta 11 in 2002. Each limited public company aims to make profit for each shareholder with minimum risk. Eichhorn not only questions the rules of the capitalist game by creating this company with a single shareholder, herself, and setting the rule that her 50,000 euros of starting money won’t make any profit; she also opens a field in which to rethink the frame that defines the production of and commerce in artworks. Delier reinterprets this system and produces a gesture with multiple actors, a conceptual framework that questions artworks’ meaning and its means of production and doesn’t forget about the society that consumes and buys it (The Deal, 2013).
From an Agambenian perspective, a gesture’s potential goes beyond its actualization or non-actualization. We observe that the artist thinks of the local as part of a general crisis, rather than as an exotic situation; and he focuses on the choreography of certain gestures in an almost "baroque" way while speculating on risk, success, gain, and loss. While standing on his head, a young real estate boss talks about the details of the real estate sector and how he fires his incompetent employee (Crisis and Control, 2013). While he talks, the posture his body takes dissolves in the architectural language around him. But his shirt never wrinkles. Delier may inherit this powerful, irony-highlighting alienation from the ironical, witty boys who produced contemporary art in Turkey at the end of the 1990s and the beginning of the 2000s. However, one thing is certain: we are able to feel the ambivalence that humor leaves around these gestures, because the artist doesn’t leave his subjectivity outside when he records them, demarcating their relation with words, and with the place they happen in.

This attitude becomes even clearer in Songs of the Possessed, produced during Iniva’s grant and edited in the form of a drama exercise happening in a "plaza". A mixed group of white collars from the same generation scold and flatter each other. Within its boundaries, the plaza becomes an abstracted universe; its model of success is an endless cacophony that repeats the same intonations. The few sentences that may be garnered from the noise are without subtitles.

Last June, many white collars who hid their helmets and masks in their offices joined the plural voice spreading from Gezi Park as soon as they left their plazas. Even as we all seem to conclude a deal with or without a contract, as Foucault says "the inner world activism that turns its back to the world would change the world". Acting together, we will see whether this new Turkey fond of pleasures and stability will be able to rise from the depths it has landed in. The world we are in gets richer only through a humor that can poke fun at itself rather than taking itself too seriously. At this point, while speculating on future scenarios, artists and those who produce writing, thinking, and exhibitions, working in collaboration, have their responsibility and freedom in the ever-critical critical distance.

Burak Delier: Freedom Has No Script

Burak Delier is the first recipient from Iniva's Commissions and Exhibitions Fund.