About the spiritual dimension of his artistic practice and his new works in public space as part of La Forêt d’Art Contemporain, France. 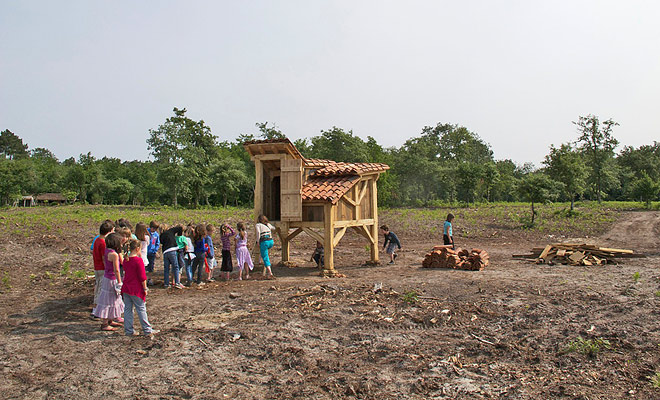 Pat Binder & Gerhard Haupt: When people who don’t know you personally see your work, apart from the aesthetic enjoyment, they perceive a very deep spiritual dimension. Is this spiritual dimension an element you’ve been working on a conscious level from the beginning or how did it come about and what role does it play in your artistic practice?

Younès Rahmoun: It wasn’t always there on a conscious level, though in a way it was, even in the things I did as a child, using basic materials close to the earth, such as stones, wood and water.

During my studies in Fine Arts, I started to take an interest in the aesthetic formal aspects of art and focused into developing a technique and learning from western art, which is what happens in general when we study. During all that time, I continued using "poor" materials, of natural origin. In the last two years of school, 1997 and 1998, I looked back to my own culture, after having studied the art of the world. Well, as a matter of fact, I always had it in mind, but I started to try and integrate more of my surroundings, both the city – Tétouan, with its Andalusian influences, its very well-kept houses and colors – and the country – the Rif with its mud houses, handcrafted materials, etc. All that inspired me in my work. And what has always been with me all my life is the willingness to try and talk to people in basic, simple terms so that everybody – from an Asian person to an African – can understand what I do, and that every culture can find something familiar in my work.

B. & H.: What made you aware of the need to go back to your culture?

Y.R.: Already in my childhood and adolescence this was always something that worried me. I want to be open, learn from everything, but at the same time I don’t want to lose myself. An in order not to lose myself, I need to know where to "put my feet." I want to fly, I want to look at the world from above, but at the same time I want a nest, a place to rest, a place where I can be safe. This is what my culture allows me, because it’s inside me, it’s in my blood. So I’ve always travelled from my culture to others, and back. But in 1997-98 I realized that it could lead to something new in my work, that it could add an ingredient to enrich it.

B. & H.: And the spiritual dimension?

Y.R.: My installations at that time and up until now are composed by several recurring elements, always in odd numbers. I was happy with the aesthetic part of my work. What worried me the most was the concept. So the questions started. What is the concept of my work? What am I looking for? Why do I like repetition? What does it mean?

So I started looking for numbers that come from my religious upbringing and are meaningful to me, such as number 7, number 5, number 3 and higher numbers such as 17 and 99. I was also worried by the disposition of the works in space. Before deciding for the Mecca orientation, I always thought about the hall in which I was going to install a work as an architectural problem.

In 2001, at an exhibition in Marseille, I did, among others, a work actually called "Nafas," composed by 17 50-litres bags which I had inflated with my breath and tied with a knot. I put them on the ground with the knots down so they couldn’t be seen in order to be aesthetically more interesting, like pyramids, or djellaba hoods [1], as if they were people praying in a mosque. I put 17 "shapes" in 5 lines. In the first line, I put 2; in the second, 4; then 4; and then 3; and in the last one, I put 4 again. Seventeen is the number of movements we make while praying. The 5 lines are the 5 prayers of the day. In the morning, there are 2 movements that are called rakat. Then 4 rakats at noon and 4 in the afternoon. At sunset, the movements are 3, and in the last prayer, at night, again 4 rakats.

And why the odd numbers? The answer came years later. The first odd number, 1, for me represents God. This being that has no gender, no smell, no color, no shape, no beginning and no end and doesn’t look like anything else. The following odd number, 3, composed by this being that doesn’t look like anything else plus a pair, that could be good and evil, darkness and light, female and male.

Y.R.: Exactly. We can start differently, with the pair of opposites, negative/positive, darkness/light, and then the 1 that completes the 3 is the being that makes the pair work. The opposites cannot work without that element that is the total energy, the element able to make an endless number of pairs work, in different dimensions, both in the macrocosm and the microcosm. Without this being that turns an even number into an odd number, the world doesn’t work.

B. & H.: And everything you did since then, like for instance the ghorfas [2], is it Mecca-oriented?

Y.R.: Yes, since then, everything that needs a certain orientation is Mecca-oriented. And the nice thing for me is to imagine that different works, like the ghorfa in Cameroon, the one that I have just finished in France, or the one in Singapore, are in different places in the world but all oriented towards the same point. I like that. I imagine them as if I were flying and looking at them from above and seeing how they are oriented, like there’s a certain organization, certain aesthetics, like the cosmos.

Y.R.: It’s part of the event La Forêt d’Art Contemporain, [3] in the Parc Naturel Régional des Landes de Gascogne, near Bordeaux. It’s one of seven projects I proposed to make in a village called Vert until the autumn of 2014.
For the ghorfa I chose a place that had been a forest where a very strong wind uprooted many trees in 1999 and 2009. It’s inspired in the buildings of the area, like an elevated henhouse with a tile roof. I used local techniques and worked the wood with a local artist.
The ghorfa is already finished, but all around it I will seed flowering plants which will flower the following spring. There won’t be a path; people will have to go through the flowering field in order to reach the ghorfa. Instead of the woods there’ll be a flower field with a little house for our childlike imagination, to escape to and hide in like when we were children.

Another work I have also done is taking 7 small stones from the Rif, which all together have the dimensions of a heart and I can hold with my two hands. I took them to the Vert cemetery and I laid them down on the ground as seven dots with the shape of a little boat. From the same place I brought 7 stones to Morocco, and took them to the cemetery of the Rif, and also laid them down in the shape of a boat, and both are oriented towards Mecca.

The 7 spots I chose in Vert to do my projects are places of special importance to the locals. Listening to people I intend to do something that interests me and at the same time means something for other people. Particularly in this case that the place of the artistic intervention is "their" village and not an art center to which people come from other places. The emotional relationship is not the same because it is "their" village, "their" land, "their" memory. I cannot speak in the same way through my work. I’m not going to criticize or cause pain with my work. On the contrary, I want to encourage them or give them some kind of hope.

Performance and video by the Moroccan artist in the context of his development and current work.

First solo exhibition in London, at Tiwani Contemporary. Rahmoun is known for his art as a trace of spiritual life.
Nafas