Residencies and festival of contemporary dance and visual arts in the public space of Ouakam, Dakar, Senegal. 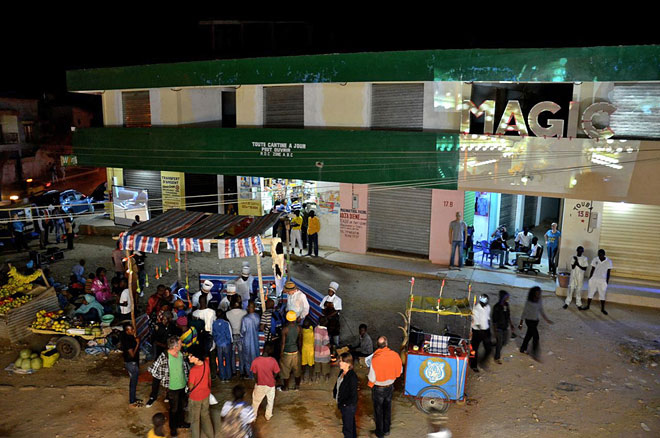 After five editions in the African continent and a virtual edition in Paris/Belleville (the La belle virtuelle, issue #14 of the magazine “Livraison”), Scénographies Urbaines celebrated its 10th anniversary and its 6th edition in Dakar with Urban Scéno Ouakam/Dakar.

Between December 2012 and January 2013, a residence and a series of public events ranging from contemporary dance to visual arts in urban spaces took place in Ouakam, on the periphery of the Senegalese capital. Urban Scéno Ouakam/Dakar was conceived as a meeting point for choreographers/dancers, performers, visual artists, and writers interested in reflecting upon the position of the body in urban spaces.

Twenty-five people from Africa, Europe, and the Americas, selected mainly to fit a South-to-South perspective, cohabited and explored collectively Ouakam, hosted by the local experimental contemporary dance association 1er Temps. The dancers of 1er Temps, which resides and develops its practice in Ouakam, and the youth of the neighborhood mediated between the artists and this traditional village, inhabited by the community of Lébous.

The Lébous are fishermen and most are practitioners of a traditional animist religion that associates objects belonging to public space (vegetable or inanimate) with a transcendental life. Trees, pieces of walls, and a dump are entities inhabited by spirits who have a strong relationship with communitarian life and individual behaviors or choices. Lébous are the keepers of a series of daily life practices that bring solutions to problems in accordance with communitarian models of decision-making. Specific public spaces of the old village – a labyrinth of sandy paths and fields – are the theater of these collective debates and mediations. After decades of marginal existence in the context of Dakar’s urban system, the construction of the Monument de la Renaissance africaine on top of one of the two sacred mountains of the area forced the neighborhood to a carry out a new, deep economic, urban, and social transformation. The populist monument, designed by the former President of the Republic Abdoulaye Wade and constructed by North Korean craftspeople, brought national and international tourism to the area, led to the construction of a highway from the city center, and in fact contributed to the urban expansion of Ouakam, which is now entirely surrounded by new buildings and construction sites.

Invited artists and participants in Urban Scéno Ouakam/Dakar were encouraged to interact with this complex context, which was  sharply outlined in a public presentation organized for the residents by the Dakar-based architect and activist Jean Charles Tall, in close dialogue with its inhabitants, in order to coherently incorporate their proposals in the public sphere. The Cameroonian writer Lionel Manga, for instance, focused his practice on storytelling the personal and collective experience in Ouakam and on outlining questions of post-colonial identities, borders, and African urbanization. Sammy Baloji focused his ongoing research on the African city, its skin and its inner structure, mapping streets and buildings, and conceiving an installation of images of Ouakam on the external walls of the mall. In a video performance, Baloji proposes a walk through Ouakam old village: a continuous sequence of urban strolling, casual meetings with inhabitants, and short chats immerse the spectator in a lively experience of the district.

Most of the artists’ interventions focused on researching, archiving, and profiling identitarian elements of Ouakam. Myriam Mihindou researched what she defined as “the blue ring”, a blue reverberation around the iris of some specific subjects, which questions possible physical elements of West-African identity. Elise Fitte-Duval investigated women and their central role in African society with a series of portraits installed in public spaces as billboards and video screenings. Ingrid Mwangi Robert Hutter’s Single Entities was presented as a video documenting performative experiences of public spaces. Dressed with outfits specifically designed for the performances, dancers move in certain areas of Ouakam, the entire body clothed and merging the person with the surroundings. Jean Chistophe Lanquetin explored the gentrification of Ouakam, mapping the baobabs and their destruction: A propos d’espace commun raises questions about modernity and Western models of development. Zen Marie incorporated for the whole residence Mr. Pousse Pousse, a movable shop (the Senegalese pousse pousse, literally “push push”) and using it as multifunctional device to generate collaborations. “Situations” materialized around Mr. Pousse Pousse during the construction of the device and the festival days, where he acted as a parasite/supporter of other performances.

Androa Mindre Kolo & Mega Mingiedi, too, focused on the construction of situations, using their bodies as a tool of generation of the behaviors of unaware spectators. With Malewa, they constructed and activated a restaurant in the most populated intersection of Ouakam with the aim of bringing Congolese identity to the neighborhood (Malewa is a type of Congolese dance). Nearby, Naadira Patel installed her Magic, an enlightened billboard that plays with the close amusement park Magicland and questions the radical “modernization” of Ouakam. Yohann Quëland De Saint Pern dispersed his outputs in Ouakam with a series of low-profile interventions: installing a sound on an abandoned car (which he previously “dressed” as a police car), advertising in Wolof (the main local spoken language) that a white artists is looking for a rich wife.

The Festival that closed the residence program took place in Ouakam’s streets, squares, and courtyards. A newspaper designed and produced during the event by Bitcaves advertised the announcements of Ouakam’s inhabitants together with the artists’ interventions. The daily involvement, contribution, and support of local dancers and young people working with the Association 1er Temps made possible not only the setup of every individual project (of participating dancers, performers, and visual artists), but also the mise en scène of all performances and events that took place during the final event.

Missing of the women / horizontality_place by Boyzie Cekwana, “ode against unforgiving masculine modernism”, involved the local dance group SAFF NEUP in a square of the new Ouakam. Fatou Cissé’s Tanebër, a dancing parade on the main streets of the neighborhood, spurred the audience, which was not accustomed to such a “carnival” practices, to participate. Andreya Ouamba’s Choreaographic improvisation used the inner space of a mall. Florent Mahoukou’s Vrais ou faux with the traditional dance company Faux lions (“fake lions”) reenacted a popular event, the fake lions fighting, in a venue that engaged hundreds of inhabitants of the area.

The complexity of Ouakam’s urban and social context triggered in the community of Urban Scéno an ongoing discussion of models of development, as imposed or expected by a Western perspective. The next steps of this ongoing research will be to set up a publication that investigates the notion of urbanism from a Global South perspective, at the same time framing the proposals of the artists. A series of international presentations of the proposals of the visual artists, performers, choreographers, writers, and dancers involved will follow up in 2013 and 2014.

Residencies and festival of contemporary dance and visual arts in the public space of Ouakam, Dakar, Senegal

Please see the list at the end of the text