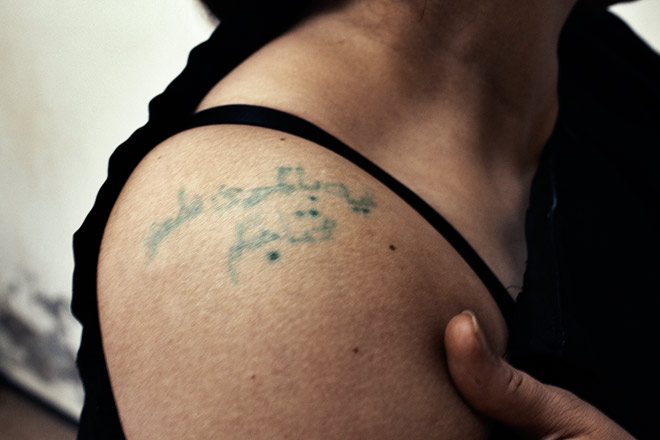 Cecilia Andersson: Tell us a bit about the background of your series Wives of the Syrian Revolution.

Tanya Habjouqa: As Syria's rebels continue a guerilla campaign against President Bashar al-Assad's regime, their wives are fighting a battle of their own. Far from the frontlines, these women, now refugees in Jordan, are struggling to support their families despite meager financial means. Most Syrian refugees have gravitated not into camps, but into cities like Mafraq, where the population has doubled to 250,000. If the women on their own living in the cities are lucky, their kids get hummus sandwiches once a day. With as many as 20 people crowded into dark two bedroom apartments, their daily lives are ruled by struggle to feed their children, wash clothes. Calls from those whose husbands are still alive and fighting are often the only thing breaking up the dull routine of everyday life. Fantasies of reunion are often fed by sultry texts, infusing romance back into the marriage. When their children were playing and the mothers could take a break, smoking if they could afford a pack of cigarettes, they would take turns imagining what they would wear or say when their husbands returned from the battlefield.

C.A.: What was the most intriguing aspect of this situation?

T.H.: While on a news assignment for Le Monde about the FSA (Free Syrian Army), I visited many rebel families, but would never see the woman of the house. They would peek out from behind the door, with barely a wave of the hand to beckon a child to bring us tea they had prepared. I could not stop thinking about the women behind the door and wondered how active the women were in this conflict. How they survived financially, how they were raising their families with little to no resources when their husbands returned to Syria to fight. After all, their traditional support systems were gone - family, neighbors, and community. Many were dead. And that is the genesis of this project. When I focused on gaining access to the women who were running the household when the men were away, I saw what an essential role they played. When the husbands would call, they would prompt their children to tell happy stories, not to mention hunger. To tell their father’s how proud they were. They wanted to make it easier for their family members fighting. Some of the women often shared a frustration that they wanted to return and help the rebels inside; they hated wasting away as refugees. A few had in fact contributed by feeding rebels or other activities. The children broke my heart. The young girls especially, who dream of going back to school and whose lives are perhaps forever disrupted. As the financial need increases, there are even those preying on the need of families, offering to marry young girls to help the families out. So I found a combination of resolute strength to protect the family along with a rising desperation.

C.A.: How is the situation for these women developing?

T.H.: As the heat of the battle rages across the border, a growing number of Syrian men are joining the frontlines, leaving their wives and children with nothing but hope. Almost daily, between 100-150 men leave the Zaatari camp in buses, home to nearly 120,000 refugees, making it Jordan’s fourth largest city, according to camp officials. Their families dwell on intermittent charity as well as relief from the UNHCR and food coupons distributed by the World Food Program. Their wives say their suffering is made worse without their husbands. With no end in sight to the war, wives fret that they will never see their loved ones again. And they are afraid of what they may be forced to do in order to survive. However, the direction I am taking with this series is expanding. The young girls I am meeting are now being sought after for marriage. Husbands, fathers, uncles are dying. Money is gone. Mothers are pressured to marry off their daughters and have very little survival options otherwise.

Selection of photographs from the series:
>> Wives of the Syrian Revolution
Photo 01
Aysha, 28, has been married for 11 years to "Abu Layla," a fighter for the Free Syrian Army and carried on a secret relationship with him for four years before that. Here, she shows a tattoo on her shoulder that reads, "Why did you leave me when I needed you?" The tattoo relates to a dramatic quarrel the two young teens had when they were dating. Upon making up, they each tattooed the message as a reminder of how horrible it was being apart. Aysha is proud of her revolutionary husband, and laughs that she never imagined the tattoo would take on such poignant meaning years later.
Photo 02
Aysha (see previous photo) with her daughter and husband who returned home from Syria for a visit. He died two months ago.
Photo 03
Aysha's sister, Nadia, 25, is also a refugee in Jordan, with a family of her own, 17 of whom currently live in a rented two-bedroom apartment. Above hangs one of Nadia's mother-in-law's few pieces of intimate lingerie, which she smuggled out with her from Syria. She has offered to share it with her daughter-in-law when her son returns from the front lines. Nadia fled Syria with the clothes on her back, and nothing else. With the men off at war, rebel wives, sisters, mother, and daughters-in-law swap tips about how best to entice their husbands when they are reunited. "A sexy bra and panties is better than a negligee when he comes home," Aysha advises. "Highlight your hair and wear a red dress."
Photo 04
Layla and Sama are 13 and 15 years old. Their mother, Um Muhammad, 39, says life is hard without her fighter husband. The mother of six is struggling to secure the monthly rent and is under constant pressure to marry off her daughters to Jordanian and Syrian suitors. Layla, right, was trampled upon in her sleep when an army unit stormed their house looking for their father before they fled to Jordan.
Photo 05
Aysha, standing beside her younger sister Nadia, holds up her fingers in the "Victory" sign, a symbol of resistance adopted by Syria's revolutionaries.
Photo 06
Um Suleiman 26, a mother of four, arrived last week. She broke to tears when her husband told her last minute that he brought her to Jordan in order to join the ranks of the FSA.‬ "If I knew that I wouldn't have left Homs in the first place," she said. "He told me many times that the children and myself stood in his way. He just returned to fight.”‬‬
Photo 07
Abu Zeid, 34 years (not his real name, hides face to protect his children and pregnant wife back home.) The two weeks Abu Zeid spent in the barracks of the military intelligence of Deraa, the cradle of the Syrian uprising, are forever engraved in his flesh. Of his left hand, there remains only swollen stump and two pieces of finger stitched with thick thread. This merchant of clothing for women, arrested in a demonstration in December, dared to contradict his tormentors who ordered him to prostrate himself before a picture of Bashar Al-Assad, the Syrian president. When he refused, they blindfolded him and placed a small explosive device on his hand and detonated. He still cannot use his left hand and relies on other Syrian escapees for assistance putting on his clothes and showering, something he say's is very humiliating.
Photo 08
Nadia's sister-in-law, Ruba, 25, plays with her baby daughter. Ruba is one of the few wives in the house whose husband has not gone off to fight. She is happy that her husband is safe with her but after spending two and a half months in Damascus's Mezzah prison last year, he returned a different person. Ruba says her husband was tortured during his imprisonment. "I do not recognize him” she says "he doesn't want to return to Syria."
Photo 09
Um Gasem holds up a picture of her recently martyred husband on her phone, killed while fighting in Syria. About to deliver their fourth child that her husband never got to see. All she has are images on her phone of his "martyred" body and this image of a happier time. He was killed in a confrontation with the Assad forces while he was with the Tawhid Brigades, fighters under the loose umbrella of the Free Syrian Army.
Photo 10
This image is taken in the house that inspired my approach to start photographing these women. This son would deliver the coffee, I never saw his mother. She would peek out from behind the door, barely a swirl of a hand to beckon a child to bring us tea. I was working on a news story for Le Monde about the FSA and could not stop thinking about the women behind the door. I wondered how active the women were in this conflict and that is the genesis of the project. The boy in photo is Sufian, 4 years old, and son of torture survivor Abu Khatab. He was a small baby when on multiple occasions his father was jailed and did not recognize him on one return home, asking him if he was his father. Living in a sparse home, the few things hanging in the wall include the original Syrian flag previous to Assad regime, which Sufian enjoys playing with.

Tanya Habjouqa was born in Jordan and educated in the United States, receiving her masters in Global Media and Middle East Politics from the University of London SOAS.

She is a freelance photographer, features writer, and a founding member of Rawiya photo collective. Based in East Jerusalem, she is working on personal projects that explore socio-political dynamics, occupation, and subcultures of the Levant. Habjouqa has worked on the front lines in Iraq, Lebanon, Darfur, and Gaza.

Cecilia Andersson, who curated the exhibition of the collective Rawiya at Bildmuseet in Umeå and Malmö Konsthall, Sweden, interviewed the artist in November 2013.