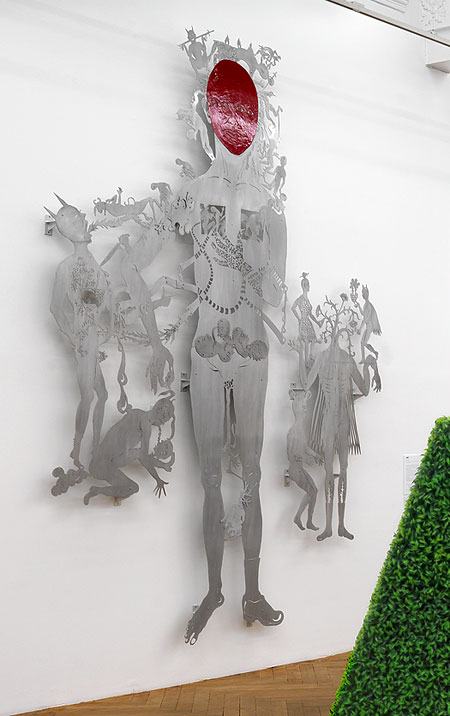 [Extract from a curatorial text]

Clearly contemporary Indonesia is not a calm and peaceful paradise set in the glorious tropics filled with lush greenery. Contemporary Indonesia is not without its uncertainties and tensions connected to the nation’s economic, political and cultural development and these issues have been and continue to be addressed by contemporary artists in Indonesia in their work. The artworks can be read as the artists’ attempt to communicate their realities not only to Indonesian audience but also to those outside, in Europe and beyond.

The exhibition "Sip! Indonesian Art Today" presents works by 16 contemporary artists from Indonesia. They belong to a larger community of artists who are actively shaping Indonesia’s dynamic developing contemporary art scene. If we consider their age and career development, the artists here represent 3 generations of contemporary art practice dating back from the late 1970s: beginning first with FX Harsono, one of the proponents of the Indonesian New Art Movement (Gerakan Seni Rupa Baru) founded in 1975 followed by a group of artists who emerged at a time when Indonesia was undergoing major socio-political transformations in its strive towards democracy during the late 1990s (Agung Kurniawan, Agus Suwage, Mella Jaarsma), the post-Reformasi (Reformation) generation of artists (Christine Ay Tjoe, Entang Wiharso, Rudi Mantofani, Handiwirman Saputra, Eko Nugroho, Syagini Ratna Wulan and Arin Dwihartanto Sunaryo), and finally a generation of artists who have been active in the past decade, sophisticated operators of their own careers in a more or less stable and democratic Indonesia (Wedhar Riyadi, J. Ariadithya Pramuhendra, Wiyoga Muhardanto, Indieguerillas and Tromarama)

In many ways, "Sip!" captures the wide-ranging artistic expressions and approaches present among Indonesia’s artists, a cultural practice that is a part of today’s global culture. If Raden Saleh [1811 – 1880, regarded as the father of modern Indonesian painting] at the end of the 19th century believes that an artist’s work is able to engage in dialogues between different cultures and civilizations, then contemporary Indonesian art practice with all its diversity should also be considered as a vehicle to spark dialogues, as we attempt to further understand the current developments in our world today.

The word "Sip" in Bahasa Indonesia may be a simple and modest one but it is full of meaning. While the origin of this word is unknown, it is a word that is used by nearly everyone everyday. "Sip" is the briefest way to state that something –whether an art work, an event, an experience or anything – is good, of good quality, super or outstanding even. Like this word, and like the process of our ongoing global culture, we do not question the origin of an idea, but we consider how this idea can continue to grow and contribute to the interaction and civilization of the world. In a way, we can say that ‘Sip’ has no such thing as exotic cultural background, neither stereotypical cultural baggage. Whatever the case, the meaning is clear: good, great, outstanding.

- see the information below the text