The Prediction Machine. Two painting installations at Sharjah Biennial 11, 2013. Statement by the artist and photos. 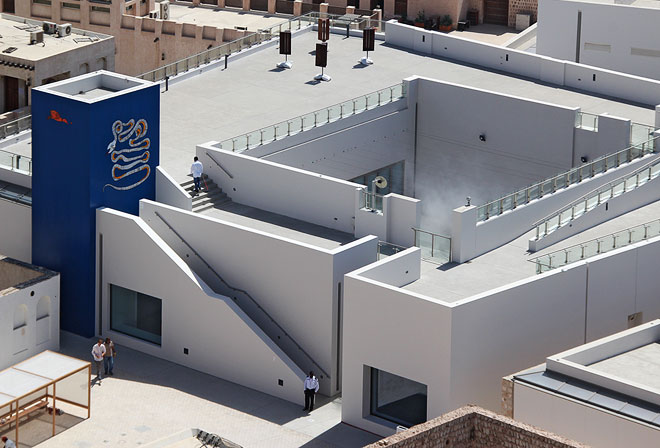 This work tells stories of saints and superheroes. You'll find references to Ethiopian church paintings, African barber salon art, a great deal of Sun Ra's afrofuturism and even some retrofuturism to boot. There's also music, a recurring theme in my art. I've given myself poetic licence to jump freely between subjects, contexts and time frames.

The Prediction Machine asks questions about Western norms in art, the meaning of Europe today and the persistent division between what's designated the West and the non-West. Thank you to scholars Salah Hassan and Iftikhar Dadi, among others, for leading me to these issues. I'm an Afro-Arab who grew up in Sudan, and yet, ironically, since moving to Norway I've learned more about the history of painting in Eastern Africa and around the Nile Valley. I've also learned about modern racism in the West, beginning with the time of European colonial ventures in Africa and other parts of the world in the mid-nineteenth century, to its contemporary incarnations in the draconian immigration laws that close borders to Africans and others from the non-West and the general xenophobic and Islamophobic attitude that dominates European politics.

These attitudes have manifested themselves in visual and popular culture historically, and they still do today. The Prediction Machine is an effort to counter this.

Mohamed Ali Fadlabi works primarily in painting, performance and text. Although he has lived in Norway for the past decade, his work maintains its roots in African culture, tempered by irony and postcolonial theoretical discourse, as he seeks to seduce the viewer with a series of culturally defunct frames of reference. In 2008, he founded the gallery One Night Only, in Oslo, which presents a new exhibition every Monday.

© Text from the catalogue of Sharjah Biennial 11, re-published with permission of the Sharjah Art Foundation.
© Photos: Haupt & Binder