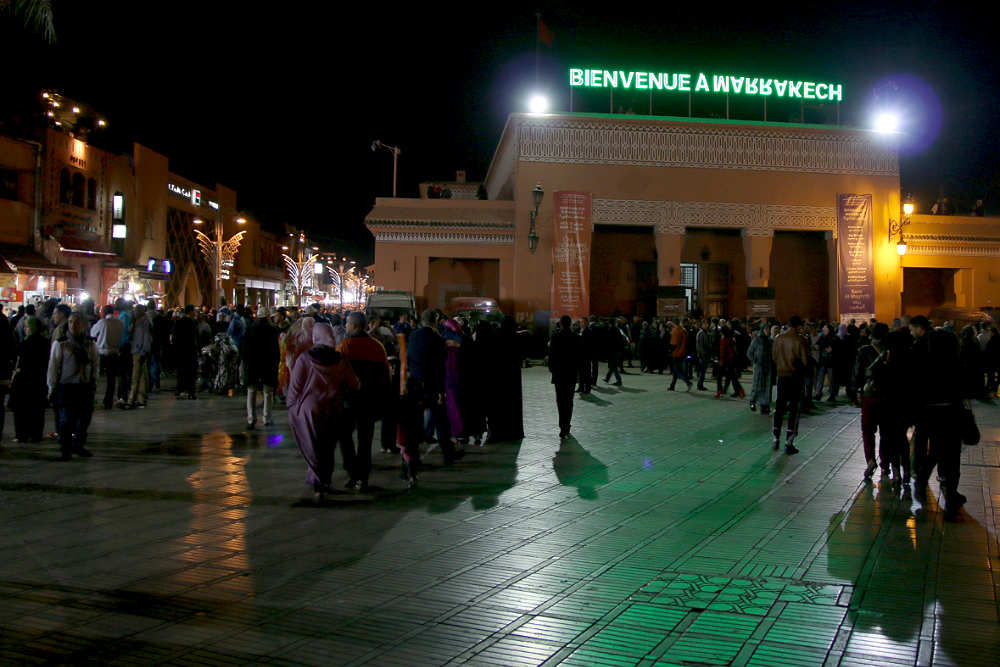 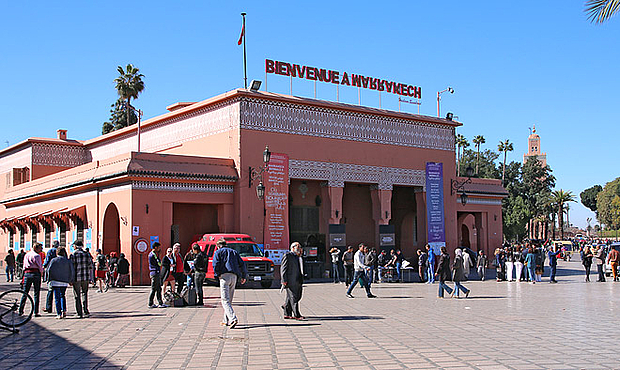 Photo Tour through the exhibitions
The Nafas Tour includes all the venues of the Visual & Sound Arts section, and works by almost all the participants.

The fifth edition of the Marrakech Biennale opened to the public, asking invited artists and the public "Where are we now?" Although the Biennale explores cinema, literature, and performing arts, I will focus on the Visual and Sound Arts section, curated by Hicham Khalidi, a Brussels-based, Moroccan-born, and Netherlands-raised curator. I generally don't like to underline geographical proveniences as a special belonging capable of explaining ultimate truth about individuals. But I will make an exception here: the geographical path has a strict relationship with the concept of this edition of the Biennale. "Where are we now" is the question asked by artistic director Alya Sebti, Moroccan-born, France-educated, and Berlin-based, together with Hicham Khalidi. "Two migrants who want to work in Morocco," underlines Khalidi. "It is not a process of migration anymore, is a process of re-migration. A shift between North and South, West and East." Marrakech and Morocco as a starting point for two re-migrants to explore issues of identity and post-coloniality in a broader sense.

According to the Marrakech-based magazine "Dyptik", whose February/March issue number 22 was almost entirely dedicated to the event (and which was extremely visible in all the kiosks of the city during the opening days), in 2012 the Biennale was a game for bearded, Bermudas-clad hipsters, red carpets, and posh events for a reduced élite of expats. This year, a very different atmosphere pervaded the event, starting with the venues. No longer concentrated solely in the Royal Theater, the official program of the Biennale selected three locations spread across the old center of the "Red City" as frames for the main shows: the 16th-century El Badiâ Palace (mostly dedicated to site-specific sculptural projects); the Dar Si Said Palace (hosting interventions related to existing collection of the museum); and the former central bank of Marrakech, the Bank Al Maghrib, transformed by Hicham Benhoud’s sign-installation BIENVENUE a Marrakech (2014; it questions King Mohammed VI’s 2020 goal to attract 20 million tourists in the city) and shows mostly already existing works related to economy, migration, globalization, and identity. The three main venues, a performance section at the Royal Theater, a video section at the L'Blassa, and a series of events happening all over the city hosted more than forty artists, twenty of them with specially commissioned works.

"You have to work within a context. You can not work outside of it," says Khalidi, who developed the exhibition after a long period of field research, which brought him to analyze and synthesize the economic, social, and cultural context of a country 40% of whose inhabitants are under 25 years of age and which has a 5% annual population growth rate, a still very low national product, and an economy based on tourism and agriculture. This exploration evolved with the edition of a reader about the city for the artists and the team involved in the elaboration, production, and communication of the event. Initially, Khalidi even configured the program of the Biennale as a complex network of venues spread all over the country, in order to embrace the whole history of Morocco from the Jbel Saghro Massif with its ancient rock art to the industrial areas of the city. But having to cope with the reality of economic shortage, he decided to work with the main venues of the Medina.

With the subtitle Identity as potential. Identity as fiction, the curatorial project questions the value of the concept of the Contemporary at large, using art strategies as a way to understand national identity. Following the research-based approach initiated in 2014 with the show On geometry speculation (a parallel between Islamic visual culture of the Golden Age and contemporary Western art), Khalidi pushes viewers to reflect upon the relationship between local and global, using Morocco as a point of view on an ongoing global clash. The theoretical approach is not an abstract imposition of a series of critical theories about the present (from Postcolonial to Postmodern critical discourse), but rather the result of the juxtaposition of artworks that explore different themes: the economy, tourism, identity, migration. With the setup of his studio in Marrakech, which also produced a large part of the artworks of the biennale, Eric Van Hove investigated this relationship, transforming a Mercedes-Benz engine into a 100% Moroccan product. Manufactured by local craftsman in a collective process, V12 Laraki is a hybrid between a motor and 500 years of local knowledge of craftsmanship.

To conceive his I will not stroll with Thamy el Glaoui, Jelili Atiku cooperated with the Amazigh, who gave Marrakech its name: mur-(n)-akush, "land of god". Atiku's performance asks about Morocco’s identity: using Amazigh fabrics and design, he organized a procession up to Djemaa el-Fna, himself on a horse-drawn carriage dressed like a king with Berber fabrics, followed by 50 decorated sheep. Younès Rahmoun’s installation titled "77" translates transcendental experience into a physical space, illuminated by copper lamps produced with a local craftsman. 77 is the number of ways of practicing Islam and the number of the lamps installed in the underground room of the Bank Al Maghrib.

An important aspect of the production process of a good part of the works proposed at the Biennale is the relationship that the artists had to build up with the city: every work produced was the result of at least one month of residence in Marrakech. This relationship brought every single artist to develop his or her discourse through a constant balancing between Western art language and local culture and knowledge. This tension is more visible, explains Khalidi, when the inhabitants of the city start to visit the Biennale, bringing their point of view on the artworks.

"Aesthetics and politics" is an expression that could shape the concept of the show in a way that makes the viewer the real center. This focus on accessibility is a legacy of Khalidi's previous projects developed in Europe. As art director of TAG in Den Hague, he focused on the intersection between technology and society, working mainly with the community of a residential area between the city center and its bourgeois suburbs.

A powerful quality of the curatorial selection is the orientation toward sound, a choice that pushes the viewer to shed potential questions about the systemic meanings of the artworks and engage a connection with their locations and physical interactions. Sound involves space and duration and forces even chance observers to experience a context, observe it, feel it, and spend time on it. It is a matter of presence.

For example, this is the clear intention of Clara Meister's Singing maps and underlying melodies, a series of concerts by local musicians in different locations of the Medina conceived as a psycho-geographical experience of the city for Biennale viewers and for a chance public. Ici Maintenant Ou by Saout Radio (Younes Baba-Ali, Anna Raimondo) proposes a similar process of relational engagement with urban spaces through a sonic dérive in a Marrakech cab provided with a program of sounds and music. Cevdet Erek's Courtyard Ornamentation with Sounding Dots and a Prison is a simple and yet engaged site-specific installation at El Badiâ; its immersive power makes it one of the strongest works of the Biennale.

Marrakech Biennale 5
Where are we now? 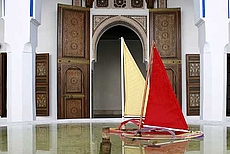 Review of the visual arts exhibition, curated by Abdellah Karroum. With a photo tour.