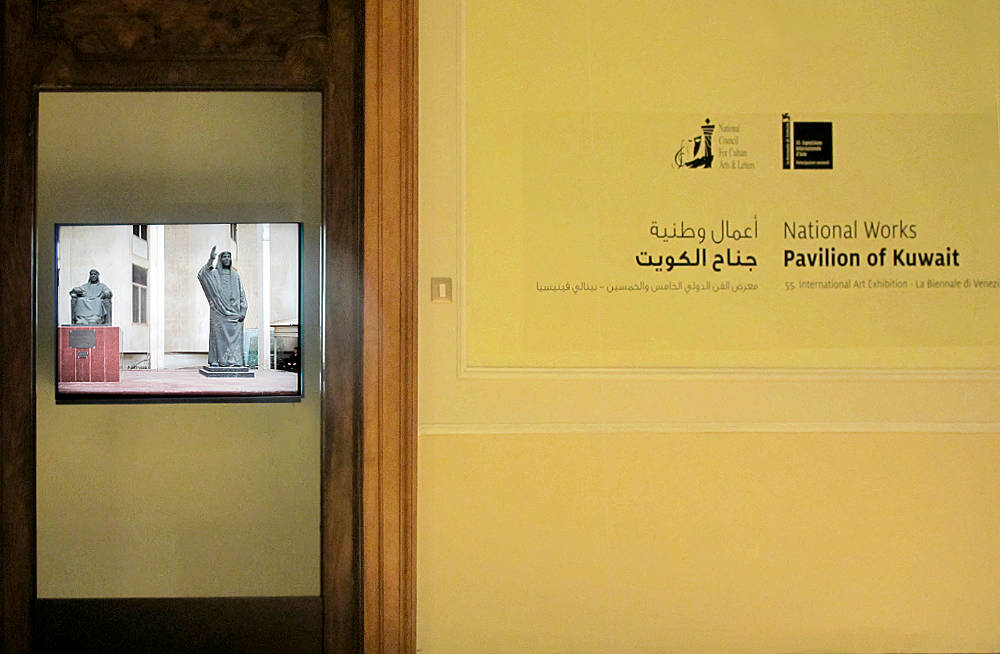 A fibreglass copy of this statue’s hand is prominently displayed in National Works, the exhibition on show at Kuwait’s first pavilion at the Venice Biennale. Alongside this hand rests a bronze bust of Sheikh Abdullah Al-Salem Al-Sabah (1950-1965), itself an early test piece of a detail from another statue by Mohammad commissioned by the same newspaper in 1971. These working models, together with other photographs and prints chosen from the artist’s studio in Al-Rigga, present the visitor with partial glimpses of a unified whole, and mirror the artist’s own journey to a foundry in Basingstoke in England, carrying no more than a maquette of a face, from which he fashioned the finished body.

The exhibition seeks to address the very concept of "National Works." The accompanying exhibition guide contains a timeline that juxtaposes details from the two statues, against selected stages in the evolution of Kuwait’s arts scene from one hand, and on the other major milestones in Kuwait’s modernizing project and international relations.

Born in Kuwait in 1943, Sami Mohammad is known throughout the Arab Gulf for art which deals with human suffering and emancipation from social constraints. Neither of the two statues, which are very different to his usual work, were displayed outside their site at the newspaper’s headquarters in Kuwait for fear of angering a conservative society. This remains true even after the status of the statues received a boost during the Iraqi invasion of 1990, when soldiers, unable to pull them down, shot at them instead, marking them with scars that remain to this day, or indeed after the artist had to flee troops sent to ask him to make a statue of Saddam Hussein. Following the third Gulf War, a bust of Saddam himself was placed in the private Kuwait House for National Works museum.

The statue of Sheikh Abdullah Al-Salem depicts the emir enthroned, his foot thrust forward, while his left arm rests on a weighty tome representing the constitution. On the side of the throne beneath the constitution are reliefs of a builder, worker, bureaucrat and female student, on the other side is the figure of Justice, depicted as a woman, while on the back is a sailor, and their rendering recalls Mohammad’s early works. Mohammad himself was a volunteer with the popular Kuwaiti resistance, formed in response to threats to annex Kuwait into a Greater Iraq which were issued in 1961, the very year that Mohammad became a full-time artist at the Free Studio (Al-Marsam Al-Hurr) in Kuwait. It was also the year Kuwait won its independence from British Mandate, set up a fund for Arab economic and social development with a capital of 50 million Kuwaiti dinars, became a member of the Arab League, and dispatched a diplomatic delegation (including the head of Al-Rai Al-Aam) on a tour of the Arab world in a bid to assert the independence and international standing of the State of Kuwait. As this was taking place, Kuwait itself became a ferment of new construction, creativity and political awakening.

The second part of the exhibition comprises a selection of back-lit photographs by Tarek Al-Ghoussein, born in Kuwait in 1962 to a diplomat who was part of another delegation tasked with brokering Kuwait’s UN membership, though it would only complete its mission in 1963, after the Soviet Union vetoed its first application. The images are part of K Files, a larger scale project in which the artist collects and archives materials garnered from his family history, antique shops and the Internet. The photographs show the artist standing in a variety of locations in Kuwait and act as an exploration of these places and the extent to which what was produced within them constitutes "National Works": oscillating between the twin poles of individual and nation. Situated in these landscapes, the artist is being measured against them, and against the very process by which the modern nation is constructed: a relationship in which power and agency alternate between producer and product. These relationships of person and place take us back to the figures depicted on Sheikh Abdullah Al-Salem’s throne. For instance, Al-Ghoussein positions himself in the playground of the Abdullah Al-Salem School, a place which acted as a launch pad for students of many different nationalities, who would go on to run institutions both within Kuwait and abroad, then again in the Qasr Al-Salam, an architectural marvel which was used for receiving guests of state before being destroyed in the war and subsequently abandoned, and once more in the Kuwait Stock Exchange, where investment and trade perpetuate Kuwait’s fabled wealth.

Kuwait has long sought the assistance of contemporary pioneers in other countries, in order to speed up its modernization. Kuwait’s National Assembly, its white edifice looking out over the waters of the Arabian Gulf, is another site chosen by the artist. In 1969, the architect of the Sydney Opera House Jorn Utzon was invited to tender his design for the building. The state stipulated that the construction of the National Assembly be a purely local project. Utzon’s elegant solution was to conceive a building constructed of a number of identical cement units that could be cast and moved on-site. The exhibition guide contains photographs of the architect and labourers on the building site, images which starkly depict the individual surrounded by the monolithic slabs of the construction work: man against a backdrop of development projects financed by the millions of dollars flowing through the country’s oil pipelines. In another image the photographer is shown on Umm Al-Ghaz, a man-made island created in the early years of Kuwaiti independence to facilitate oil drilling. In the background we see the Kuwait Towers. It is the individual in relation to location/project/state/nation and vice versa. Perhaps all works carried out in the context of Kuwait’s modernizing project take on a "national" character, private and public alike: from the founding of a bank, school or construction company, through to artistic and educational endeavour.

The curation of the project was wide ranging. It explored names and works proposed by individuals and institutions invited to lend their assistance, and examined the motives that lay behind these proposals and the concerns and interests of possible alternative work, while having to deal with the inevitable expectations surrounding a Kuwaiti pavilion. Despite the tight timeframe for selecting works, titles and artists, and despite the fact that the exhibition was forced to rely on already extant pieces for much of its content, the decision was made to commission work nonetheless. The exhibition is being held in Palazzo Michiel, an ancient palace built by one of Venice’s twelve founding families. Local heritage laws, which forbid defacing the interiors or altering their colours, have had a profound influence on choices made for this exhibition’s layout. The form the end product has taken is due in large part to the spirit of experimentation. It is impossible to be reductionist when discussing the Pavilion’s exhibition, to interpret it with preconceived assumptions based on the artists’ more famous works, where they live or the interpretations that have traditionally been associated with their output. The Kuwaiti Pavilion’s exhibition adopts the same approach to the modernization project as it does towards the business of repairing the country’s long absence from the Venice Biennale: filtering historical, artistic and modernist narratives through the concerns of relativism, patronage, innovation, citizenship and status.