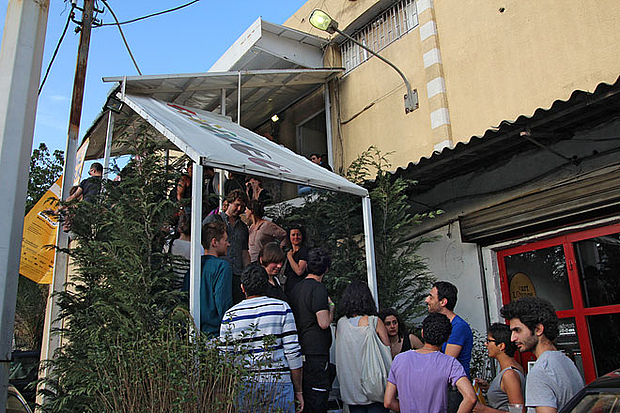 For more than a decade, the Home Works Forum on Cultural Practices has come closer than any other perennial event of its kind to playing the part of an international biennial of contemporary art in Beirut. Yet it stands apart from that model in several distinct and deliberate ways. Organized by the Lebanese Association for Plastic Arts, Ashkal Alwan, Home Works consists of exhibitions, dance and theater performances, film and video screenings, book launches, concerts, special projects, talks, discussions, debates and more. It has never followed a strict or regular schedule. The most one can say is that it happens every few years, or whenever the political situation in the city, the country and the wider region allows. There is a strong sense that Home Works happens when it can, and when it is needed. Deferrals and disruptions have long been part of the mythology of the event, which has been delayed due to the outbreak of the second Palestinian intifada in 2000, the invasion of Iraq in 2003, the assassination of Lebanon’s former Prime Minister Rafik Hariri in 2005, the war with Israel in 2006, and the eruption of violence between Hezbollah and its political rivals in the streets of Beirut in 2008.

Besides the first edition – which focused on art and artists from Egypt, Iran, Iraq, Lebanon, Palestine and Syria – Home Works has never defined itself by time (emphasizing the current or the new), space (being associated with a specific site, venue or neighborhood), geography (concerning itself with what the art of the Middle East or the Arab world looks like) or medium. It is multidisciplinary to the core. It responds to the needs of the city. It both captures and generates an incredible sense of urgency. It identifies critical issues among the local art scene, and it has always been open to, even dependent upon, the input of other fields. Among the contributors to the first five editions, for example, were Jacques Rancière, the Otolith Group, Critical Art Ensemble, the human rights lawyer Nizar Saghieh and the Hezbollah strategist Ali Fayyad, also a member of Lebanon’s parliament.

The sixth edition of Home Works, which ran for fifteen days in May 2013, diverged from the last two iterations of the event in that, on paper at least, it pursued no stated theme or themes. It was preceded, only, by an evocative text written by Christine Tohme, Ashkal Alwan’s dynamic director and co-founder. And yet, like code to be deciphered every day, and with every work, that text had everything in it, including a meticulous arrangement of carefully planned and plotted ideas related to trial, reenactment and transitional justice. Other themes that emerged over the two weeks of programming included the body, authority, modesty, gender trouble, intimate violence, speech and silence and the devastating irrelevance of intellectual and ideological elites.

The writer and scholar Tarek El-Ariss gave a lecture titled "Majnun Strikes Back," which explored how Majnun Layla, an archetypal love story from the seventh century, had been re-imagined in contemporary works of art, theater and literature, from the sub genre of civil war novels (Hoda Barakat’s The Stone of Laughter, Hanan al-Shaykh’s The Story of Zahra) to the popularity of Turkish soap operas. The protagonist of the original story, a poet who is consumed by desire and loses his mind when he is separated from his lover, was reconfigured as a maverick gay man in a milieu where homosexuality functioned as an irruptive form of rebellion, and war as an experience of brutal violence and sexual exhilaration alike. Woven into Ariss’s talk was a subtle re-assessment of cultural production and sexual politics in Beirut in the 1980s.

Barakat, for her part, gave a quick and concise lecture on the Biblical figure Job, whose suffering is similar to that of many of her fictional characters. More to the point of her participation, however, was the discussion around her talk, which revisited the literature of the 1990s, and helped bridge the gap between an older generation of novelists and a younger generation of artists. "I have been hearing about this generation for a decade," said Barakat, "but I had no idea you were so many or so creative. I ran away from this country. I was wounded by this country. I didn’t think I looked like this country. But I hope I look like you. I hope my children look like you. And I thank you, I thank you a million times for bringing me back to my country." More prickly in its resuscitation of old debates were Ghalya Saadawi’s nighttime and early morning walking tours of the downtown district, which exposed the extent to which Solidere, the private real-estate company in charge of the reconstruction of Beirut’s city center, had blocked of entire urban quarters from residents and visitors alike.

For the first time, Ashkal Alwan turned the Home Works exhibition program over to an outside curator, and so Tarek Abou El Fetouh organized a terrific, untitled show, which was divided into three sections of around a half dozen artists each. Conceived as a series of reenactments, the show sought to re-capture the atmosphere of three historical exhibitions – the first Arab Art Biennial, held in Baghdad in 1974; the inaugural edition of the Alexandria Biennale, staged in 1955; and "China/Avant-Garde," a show at Beijing’s National Gallery, which was shut down by the authorities on the day it opened in 1989.

The catch was that it did so without including any references to the original shows, and with none of the works or artists who had been included in them. Only digital copies of the three catalogues were included. Instead, works by artists such as Ali Cherri, Cao Fei, Iman Issa, Basim Magdy, Wang Ningde, Walid Raad, Khalil Rabah, Wael Shawky, Mounira al-Solh, Walid Sadek and Song Ta were tasked with resonating in a kind of self-styled echo chamber, with issues from the past sounding loudly in the contemporary art of the present. Fetouh’s interest in sudden leaps in time and place, from one era or geography to another, also characterized a performance by the artists and curators Yazan Khalili and Lara Khaldi, who grafted contemporary love letters onto the ill-fated political unions of Arab nationalism in the 1960s, drawing on video works by Jumana Emil Abboud and Basma Alsharif along the way.

Fetouh made a point of not including any work on the civil war or based on archives, preferring to feature a separate library in a common space between the three sections of his exhibition. That is not to say that archives were absent. Presentations by Catarina Simão and Subversive Films worked through archival material from Mozambique and Palestine. In the film Broken Record, Parine Jaddo dealt with an archive of missing songs in Iraq. Boris Charmatz’s Flip Book considered an archive of movements, embodied and enacted by his dancers, in an homage to Merce Cunningham’s choreography. A lecture performance by Marwa Arsanios used the history of a magazine (Cairo’s Al-Hilal) as the starting point for an inquiry into actresses, surrogates and stand-ins, exploring the role of feminism in progressive political movements transformed into armed insurrections. And a riveting new performance by Rabih Mroué, titled Riding on a Cloud, delved into a heartbreaking story of injury, disability and the destruction done to a culture by the targeted assassination of leftist intellectuals in Lebanon throughout the 1980s.

The point of all this, it seemed, was not to dredge up the past but rather to see history differently, and to recover materials, ideas, things, rumors and desires that had been previously missed, lost, misplaced or forgotten. More often than not, what came up during Home Works 6 was far more emotional than anything the city’s contemporary art scene, known for being nothing if not cerebral, has previously allowed. Nowhere was this more in evidence than in the Beirut iteration of Matthias Liliethal’s X-Apartments project. A theater maker and dramaturge who is currently directing the second year of Ashkal Alwan’s experimental art school, the Home Workspace Program, Lilienthal tasked his fourteen students with creating new works to be staged in a series of private homes in the neighborhoods of Bourj Hammoud and Khandaq al-Ghamiq, which audiences would see, two by two, in the context of two tightly managed walking tours. The resulting works tapped into issues tied to labor, relations among migrant communities, violence against women (from marital rape to maid abuse), homophobia, racism, hate crimes – a world of problems heretofore unaddressed. And yet those works also uncovered a fascinating cast of characters, inventive forms of small-scale artistry and image making, a great love of language, beautiful but crumbling architecture, old-fashioned manners, and a million buried histories waiting to be told. As such, Home Works 6 vastly expanded its reach, and proved itself productively uncontainable in any model of how an event like this should be.

Produced by Matthias Lilienthal, with the participants of Home Workspace Program

Partners and participants of further special projects are listed in the detailed program.