The exhibition in Cairo on the ambivalent nature of photography and its discursivity, curated by Maha Maamoun and Ala Younis. 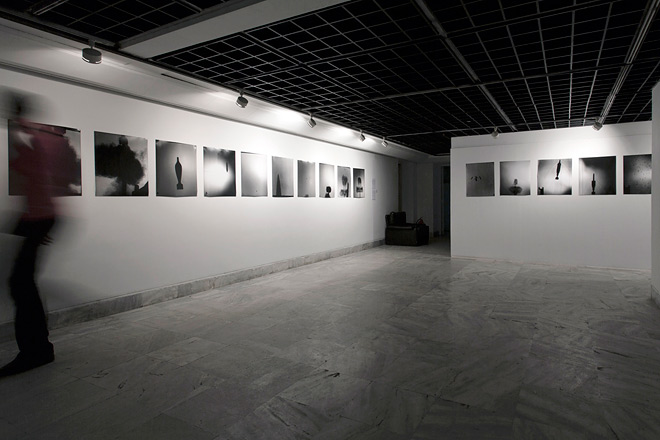 Covering one’s back – the title of the photography group exhibition at the Gezira Art Center in Cairo, curated by the two artists Ala Younis and Maha Maamoun, may have been understood simultaneously as a claim of defense and a coquettish wink to the viewer's pre-conditioned expectations to photography as an objective medium, mostly valued for its documentary quality and verisimilitude. The exhibition itself focused on the ambivalent nature of the medium, offering a wide range of photographic practices and genres from studio portraits to landscapes, from archival practices to street photography.

By embodying a discursive approach towards photography the multimedia installation Photographers in Conflict (2006) by Goran Galic and Gian-Reto Gredic took in a central position in the exhibition. Consisting of twelve portraits of internationally renowned photojournalists (amongst them Stanley Greene, Paolo Pellegrin and Rena Effendi) and six videos of interviews with them the work addresses the political agency of photography in the context of media coverage.

Talking about their profession and their approaches to photography in intense moments of conflict, violence, catastrophes and disasters the twelve protagonists of Photographers in Conflict share their experiences, thoughts, doubts and anxieties that are related to their commitment as journalists and with this inevitably tackle many ethical controversies. Listening to them it becomes clear very quickly that the main conflict addressed by Galic and Gredic circles around the question those individuals face contributing to an industry of image production defined by an ideologically charged model of reportage: How can one depict and present human misery and suffering appropriately in the sake of objective information?

On another note Taiyo Onorato and Nico Krebs suggest us to take a closer look at the relationship between reality and photographs and how we usually take their factuality for granted. Their work The Great Unreal (2005-2009) a series of color and black and white photographs, that have been produced during an artist residency in the United States collapses real encounters with an excessively over mediated and hence mythologized environment into its Hollywood stereotypes. By combining purely documentary images of landscapes and still lives with digitally altered ones, fiction not only infiltrates reality in an uncanny way, it actually takes over our rationality and becomes the dominating principle by creating a disbelieve that some of the photographs could be in fact authentic. Consequently the doubts in our own commodities of looking at images and the way we tend to categorize them, turns the real into something un- or more precisely surreal.

But that the surreal can also be implicit in something apparently completely factual shows Portrait of a bullet (2009) by Raphael Hefti. The series of black and white prints is based on found negatives from the institute of ballistics in Thun, Switzerland. Taken with a for this purpose especially developed camera, they are test images for evaluating the precision of different kind of ammunition. The bullets, the explosions and the sound waves they create appear as abstract compositions with almost painterly quality. Making visible what is normally only audible those images epitomize Walter Benjamin’s notion of the "optical unconsciousness", the ability of the photograph to reveal the unseen or aspects of reality that register in our senses but never quite get processed consciously.

The examination of Benjamin’s "optical unconsciousness" is literally extended in the case of Hassan Khan’s G.R.A.H.A.M. (2008).  Being in the first place an extremely sensitive portrait of his now deceased friend, G.R.A.H.A.M. extends the modalities of a photographic portrait, translating it into video that original being 10 minutes long has been slowed down to last 14 minutes.  Khan captures Graham while interviewing him about his life under the condition to not answer verbally. The slow motion of the film and bold focus on the person in front of a blank backdrop leaves him not only isolated but also almost completely detached from time and space, turning him into a ghost like figure, whose presence seems nevertheless so strong that it becomes intimidating. Exploring the margins between photography and video, trough prolongation and deceleration Khan’s G.R.A.H.A.M. similar to Andy Warhol’s screen tests translates the unraveling aspect of real time that is normally captured through film into something generic photographic that is closer to the instant, allowing more time for contemplation. It creates not only a surface for the viewer's projections triggered by the observation of a total stranger’s physiognomy and gestures, it also confronts us with our own physical and visual presence and the way our mute appearance often predefines our personality to others without providing a full disclosure of who we really are.

Whereas Graham is portrayed as a completely isolated individual in front of a camera, who appears out of context but nevertheless seems to perform an authentic image of himself, this kind of performed authenticity in portraiture is questioned and sneered at by the Lebanese artist collective Atfal Ahdat's in the context of contemporary studio photography practices in the Arab world.

With Take me to this place: I want to do the memories (2010-2011), an installation that combines digital photographs and sound, creating a highly artificial environment Hatem Imam, Raed Yassin and Vartan Avakian who form Atfal Ahdat (which can be either translated into "Juvenile Delinquents" or "Children of Events" and refers to the generation of youth born during and after the Lebanese civil war-) look at the representation of individuals and the performance of identity in the photographer’s studio of the digital era. The title could be read as a tongue in cheek reference to their Lebanese fellow artists, who to a great deal already examine the role of the archive and conventions of historical studio portraiture in the Middle East. By taking this to another level, focusing on current image production, Atfal Ahdat not only consider historical shifts in the usage of the medium that is mainly determined by a general transition from analogue to digital but also deliberate with a lot of (self-) irony present social, political and economic dynamics and changes.

The ability of photography to be not merely a tool of representation but also that of imagination is emphasized here. Our personalities become something arbitrary that can be altered by a few mouse-clicks, changing clothes or backdrops creating virtual identities that aren’t necessarily coherent with who we are but perhaps more with who and where we desire to be.

The protagonists of Yasser Alwan’s and Heini Stucki’s portraits can’t be subjected to that kind of escapism. Photographed on the streets they are captured in their natural environment in some cases it appears to be unknowingly. Against all odds (1996-2001) byAlwan, who is Iraqi of decent, lives and works in Cairo, is a series of black and white photographs shot in medium format, portraying men bidding on horse races in the Gezira Sporting Club in Cairo. Although it is rumored that the races are rigged in favor of the management and organizers, the men bet anyway taking loosing into account but nevertheless keeping up a stubborn persistence enjoying the thrill of gambling - or might it be a whiff of hope?

Similarly to Alwan, Stucki depicts men at the margins of society. He portrays hobos, street sweepers and petty crooks on the streets of Bern. In the tradition of street photography both expose their protagonists and their characteristic features with a particular focus on the decisive moment.

On the face of it also George Awde’s photographs seem to be rooted in the documentary genre. But further than exploring individuals in an urban environment instantly, concentrating on a distinct moment that produces a strong image, Awde’s approach goes deeper. Defined by a long research process and long lasting personal relationships to the people he photographs, Awde adds a complex conceptual layer to what appears to be a purely documentary method, developing a subtle narrative that over a time span of several years enfolds not only the personal stories of his subjects but also observes current social and political developments in the Middle East. In his two series of large format color photographs Quiet crossings (2009) and Shifting grounds (2011) Awde explores the situation of young Syrian, Iraqi and Lebanese men living and working in Beirut. With a remarkable emphatic eye and an unique feel for color both series try to negotiate a space in-between, outlining an interim between social political rupture and human bonding. In Quiet crossings it’s the precariousness and uncertainty Awde’s subjects live in that marks this space: Suspended between their rural homes and the urban environment of Beirut, driven by their needs to sustain their families but also their ambition to overcome social economic boundaries, they linger in a state of instability and volatility. In Shifting Grounds this interim is specifically defined by the uprootedness of young Syrian men working in Beirut as their country is shattered by a civil war. And in both series it’s the process of coming of age the young men go through, their desires, hopes and aspirations facing an often disenchanting and brutal reality - but also the relationship between them and Awde himself is crucial, implicating tensions of sexual ambiguity.

Given the highly charged political environment of Cairo and the developments related to the Arab spring the lack of explicit encounters with these circumstances in the show was a bit surprising. But taking the exhibition and its comprising character as a whole entity into consideration this blank space made sense. Asking questions like "What images can we bear to look at now? And what images can withstand us and our restlessness?" the exhibition and its discursive elements that included a series of artist talks and other public events aimed rather to form a platform for discussion on modes of representation than attempting to give a plain comment on a situation, which in all its complexity might in fact demand for new forms of representation. Rather to cover our backs, and to save our asses, it called for a mutual common ground to consider different modalities of photographic mediation and their rhetoric in relation to our agency as individuals.

Curators:
Maha Maamoun and Ala Younis