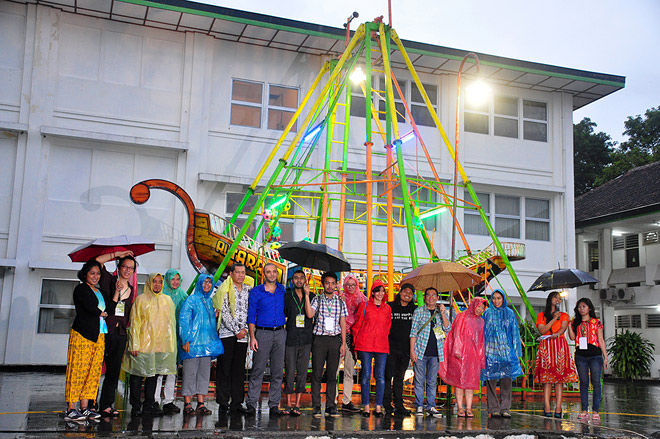 On its trip around the equator this year, the Biennale Yogyakarta XII Equator #2 encounters the Arab world. But those who expect an artistic approach to political topics like the Arab Spring will be disappointed in "Not A Dead End – Indonesia Encounters the Arab Region": the themes have less to do with movement in the political sense than with movement in the sense of mobility and flexibility. The focus is on emigration and moving, on production, distribution, and consumption in a global and widely digitalized world.

"Of course we discuss all the important topics we find in our encounters, but what we ultimately select has to be significant for Yogya and Indonesia," explains Yustina Neni, Director of the Yogyakarta Biennale Foundation, which organizes what must be Indonesia’s most influential art event. "In the context of our partner countries, that is primarily the hajj and migration for work – but also perfectly normal life. And that’s what we want to present to our public: that there are things completely different from Islam that are relevant in Arab countries."

For example, during a residence of several weeks in Cairo, the Indonesian artists Duto Hardono and Venzha Christiawan experienced that, despite mass demonstrations, shootings, and fundamentalist movements, life in Egypt continues normally. "Actually, the city is not so very different from Jakarta: a total chaos," noted Duto Hardono, who comes from the Indonesian capital. During his stay, he sought in particular societal parallels between Egypt after the revolution and Indonesia after the Reformasi of 1998.

At the Biennale in Yogyakarta, Hardono presented his interactive work C.C. Records: on a table lie dozens of old-fashioned vinyl records with Egyptian pop songs, each cleanly cut into two halves. The visitor can now place any two halves on a record player, from which two snatches of Arabic music tootle away in an endless loop. A camera projects the turntable onto the wall, creating a psychedelic retro effect in combination with the background sound. "I found these records, some of them already broken, in the hindmost corners of small electronics stores – they are like remnants of another time," says the artist, who is specialized in mixed media, sound installations, and site-specific performances.

In total, this year’s Biennale is presenting 35 artists and artist groups in five galleries: 19 from Indonesia, eight from Egypt, two from the United Arab Emirates (UAE), and one artist each from Oman, Palestine, Saudi Arabia, and Yemen, as well as one each from India and the Netherlands. The team around curator Agung Hujatnikajennong invited a conspicuously large number of artists who experiment with sound installations, videos, and animations – surely an intentional contrast to the art scene in Yogyakarta, which is otherwise oriented toward classic visual art.

The exhibition is the second edition of the Equator Series, which began in 2011 with the partner country India. Until 2022, the organizers will concentrate on regions near the equator. With this strategy, the Yogyakarta Biennale Foundation, founded in 2011, aims to break up the entrenched geopolitical parameters of North and South, center and periphery, and rich and poor, which have also hardened in the global discourse of contemporary art. "We hope to become the initiator and catalyst for the rise of alternative relations and interrelations in the practice of art," reads the statement of the Foundation Committee.

To foster these interrelations, this year the Biennale has introduced an exchange residence program. Apart from Cairo, two other Indonesian artists were able to travel to Sharjah – Prilla Tania and Tintin Wulia. In return, four artists from the guest countries came for several weeks to Yogyakarta: Dina Danish and Magdy Mostafa from Egypt, Salwa Aleryani from Yemen, and the Indian Ubik, who lives part of the time in Dubai. In addition, the artist group Mobius from the UAE collaborated with the new media art laboratory House of Natural Fiber (HONF) on the theme Open City; HONF provided the idea and the preparatory research, which Mobius interpreted from its perspective and implemented in a concrete work – a wooden city model.

This participatory approach fits perfectly the concept of curator Hutjanikajennong, who has declared the entire exhibition a "syncretistic site". "Especially in Yogyakarta, where the cultural and political order tends to syncretism, contemporary art becomes an open practice for encounters between old and new, between the native and the foreign," he writes in the introductory essay. Successful implementations of this concept are the batik experiments by the Egyptian Dina Danish: the works Electronic Stylus and Polytel Keyport on bright blue cloth do not display classic Javanese patterns, but, with a strong graphic aesthetic, the technical data of an electric pen or a computer keyboard. The Indian Ubik, in turn, who comes from communist-governed Kerala state, has addressed Indonesia’s anticommunist past. He carried out his thoughts in an arrangement of objects found at the local flea market; it reveals its detailed allusions only from close up.

But with many of the other works – whether Mobius’ open city model or the futuristic sound installation by Venzha Christiawan – the viewer cannot make out what idea is actually behind them: information is a marked weakness of this year’s Biennale. With five different exhibition sites and artists from five partner countries, the organizers have apparently spread themselves too thin. On site are neither oral nor written explanations, and the works exhibited are often others than those presented in the guidebook. Thus, in the face of the wide variety of topics, viewers often simply lack the necessary background to understand the artists’ intentions, despite all the freedom given for their own interpretations.

"The Biennale doesn’t start out from a predetermined theme or concept. But with the Arab region as ‘partner’, our attention naturally falls on social, cultural, and primarily religious connections," Agung Hutjanikajennong and his Egyptian co-curator Sarah Rifky announce quite generally in reference to their concept. And so, despite the broad thematic range, many works are concerned primarily with Islam in its societal context. For example, the impressive Wall of Tolerance by Agus Suwage: intoning at low volume from golden ears on a rusty wall is the cacophony of mosques that otherwise reverberatingly blare around the artist’s studio to call the faithful to prayer.

A magnificent implementation of the mobility theme is the sound installation Babel by the Indonesian Tintin Wulia: in the lush garden of the newly opened gallery SaRang, voices in various languages whisper, sing, or shout contemporary Arabic poems and songs from trees and from behind stairways and columns. The film and sound artist collected the material for her work during her one-month stay in Sharjah. Babel shows not only the social limits of global nomadism set by language barriers, but also the difficulty of understanding each other on the same level even after overcoming these limits.

>> Photos of the exhibition

Review of the biennial, reflections on the Indonesian situation, and notable artworks in the show.
Nafas