On the plans and hurdles in converting the historic slaughterhouses of Casablanca into a cultural center. 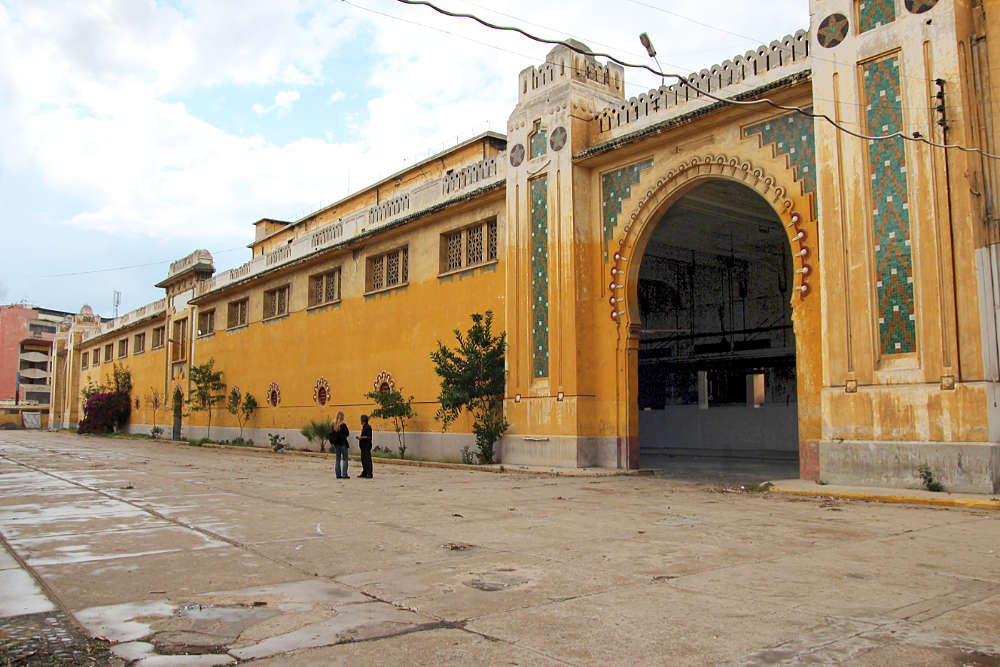 Over the last decade, Morocco has witnessed the emergence of different fields of artistic creation to which the avant-garde is committed today in terms of research, aesthetics, renewing forms, opening, and international connections. But for all that, public pleas still remain hardly engaged in this process, and the main protagonists of this cultural production are actors in civil society, united around associations that attempt somehow to pursue and broaden their actions and activities in a context that is fragile and remains reticent. Added to this is the lack of visibility of these initiatives, which is based on the lack of spaces for creation and presentation adapted to the different disciplines concerned. Thus, if we consider that lack allows for desire to emerge, desire should be the principal motor of a project to build and develop spaces dedicated to contemporary creation in its many different shapes. And just as a cultural space does not really exist without a project, a project can only be built and developed in relationship to the context – cultural, social, political, urban, economic – in which it emerges. Of all of these contingencies, the political context is certainly the most complex to broach in Casablanca.

The idea for a cultural project to convert Casablanca’s former slaughterhouses came in fall 2000, anticipating the closure of the site the following year. However, the idea remained in the state of a future projection, not for lack of desire but rather for lack of time, for lack of availability, and for lack of power to throw oneself really into such a conversion at that time. In fall 2008, benefitting from the opportunity provided by upcoming communal elections planned for June 2009 and at the request of City Council, a collective of cultural actors and different associations in Casablanca revisited the "Slaughterhouses Project" (Projet des abattoirs). The first one-year agreement was signed between the city and Casamémoire, one of the associations leading the project. [1] The first manifestation of Transculturelles, a multidisciplinary event coordinated by Association Casamémoire, took place in April of that year. The second never saw the light of day, due to the lack of financial means and any real engagement by the City.

In a context that is as poor as Casablanca is in terms of facilities dedicated to culture given its some five million inhabitants, it is particularly tempting to want to transpose the multiple experiences of European warehouses and factories converted into cultural spaces. However, it is just as necessary to question the processes for applying these "models" in the Moroccan context in general and in Casablanca in particular. And if the lack of cultural spaces often encounters factories and other abandoned buildings as evidence of this "lack," the principle of appropriating these spaces is not as evident. Examples from certain European countries of often illegally occupied former factories incite the imagination but they are not possible in the Moroccan context where authorization, even informal, is required in such instances. In Casablanca, developers and public authorities only despise these numerous abandoned sites until the day when an association expresses a desire to develop a cultural project that occupies these spaces. And if it is true that, in the case of the former slaughterhouses, cultural activities were able to begin with the City’s request within the context of the elections, extracting an agreement that would allow a cultural project to stay for a number of years remains a power struggle that is still far from being won.

Casablanca’s Hermitage Park is a vivid example of the way in which cultural and artistic "matters" are treated in Morocco. After having been solicited by city authorities to reflect on rehabilitating this abandoned land, the association La Source du Lion was insidiously excluded from the final project even though its proposals had been publicly validated the year before. [2] The new plan put in place was a tabula rasa of what had existed, like the integrated projects proposed by artists who were invited to ponder the site’s future by working closely with locals and visitors to the park. Artist studios, which had been in operation for seven years and installed in two small abandoned buildings that the city made available to La Source du Lion, were razed, depriving neighborhood children of their weekly artistic activities. Thus, in a cultural politics that only considers artist and cultural actors as occasionally casting the city in a favorable light, building real projects requires a combatant’s approach in which political instrumentalization is the unavoidable obstacle that also proves the most difficult to overcome and the main inhibitor of desire. However, a cultural project and even the idea of a cultural factory fall within an approach that touches the artistic domain as much as it touches social, urban, political, and even economic realms. Wouldn’t the authorities only gain by responding favorably and by encouraging such approaches and initiatives?

In the context like that of the former slaughterhouses, the site’s configuration in the city – Hay Mohammadi, the oldest working-class neighborhood in Morocco’s economic capital – and the local activities that stem from its former function are as many parameters to take into consideration for its reassignment as a "cultural maker," as many potentialities for urban, social, human, and economic development – beyond the cultural itself – that should question those responsible regarding the good created and the necessity of these "alternative" cultural spaces in a political project that is open to new perspectives and durable development, one that, in terms of occupying the land, is human and oriented towards less mercantile interests. The recent arrival of the tramway a hundred or so meters from the site, in December 2012, and the opening of the nearby Hay Mohammadi social sports complex a few weeks ago should be factors that are favorable to the site’s cultural conversion in a sane context where the preoccupations of citizens prevail. In France, notably, it is common to associate sports and culture with city politics, whether in terms of infrastructure or neighborhood activities. Here, however, such development can constitute a real danger for a cultural project because they can lead to property speculation that is more lucrative than culture, even though the buildings of the former slaughterhouses have been listed as national monuments for the last ten years and even though artistic experiences that break with the traditional forms of cultural action can provide as many possibilities for human socialization and "rehabilitation" in a city like Casablanca. [3]

The old slaughterhouses of Casablanca were built in 1922 by the French architect Georges-Ernest Desmarest in Neo-Moorish style.

The buildings represent 2,2 hectares of covered surface. They were decommissioned in 2002 after the opening of the new slaughterhouses in the outskirts of Casablanca.

The Abattoirs de Casablanca were inscribed on Morocco's National Heritage List in 2003.

The photographs that accompany the text by Florence Renault-Darsi were taken by Gerhard Haupt and Pat Binder in October 2012. 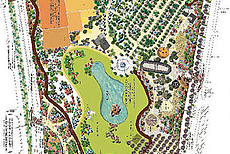 Artists of La Source du Lion take actions against the new masterplan for the park in Casablanca. 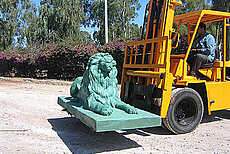 The art association in Casablanca, Morocco, and its environmental protection project for the public park l'Hermitage.