One year after the Revolution, the Tunisian visual art scene is experiencing a mutation in which action and vigilance predominate. 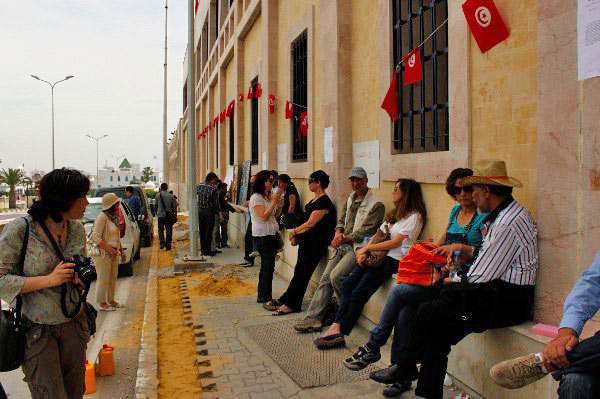 The Tunisian Revolution led to a democratization of social, political, and cultural life. For the first time since its independence, the country had free and democratic elections. The immediate consequences of this mutation are: 1) the strengthening of civil society with its movements of sit-ins, strikes, and protests for more liberty and equality; 2) the stimulation of cultural life on all levels: a theater that is becoming more diverse, film and documentary film festivals in southern Tunisia, increasingly evident street art; 3) the stimulation of political life with a redistribution of power and an active opposition.

The Tunisian visual art scene is experiencing a mutation in which action and vigilance predominate:

An active and vigilant civil society

The visual arts were structurally represented and defended by the "Association of Tunisian Visual Artists" (Union des Artistes Plasticiens Tunisiens or UAPT). Today, the democratic dynamic has seen the birth of different associations: the Union of Visual Arts Professions (Syndicat des Métiers des Arts Plastiques, or SMAP), created in 2009, which notably seeks a structure to defend the interest of visual artists and to guarantee their independence; the union whose office is comprised of young artists and that works to assure artists’ professional status, to change the politics of the current management of production assistance and the system of buying artworks as took place at the Ministry of Culture. This position is shared by other structures established after the January 2011 revolution: it is the case with the Tunisian Federation of the Visual Arts (Fédération Tunisienne des Arts Plastiques, or FTAP), of several associations of young artists at both the national and regional level. Among these different structures today there exists a desire for communal action for the principles of defending and promoting the visual arts in Tunisia.

A tangible augmentation of the number of artistic manifestations

For the last year, we have seen a great number of art exhibitions take place, most of which address the theme of the revolutionary movement and the question of citizenship. These exhibitions took place in existing galleries but also in spaces that were reinvested by art, as is the case with the Gallery of Information (Galerie de l’information), on Tunis’ main avenue.

The street was notably the site of diverse artistic manifestations: happenings, collective pictorial creations with public intervention, interventions on walls, etc… today, the public space, which was very quickly occupied by artists immediately after the January 2011 movement, remains for these artists a small guarantee of their right to the city and freedom to create. Otherwise, the artist’s citizen posture was what was most visible during the group of exhibitions with the themes Chronicle of a Revolution (Chronique d’une revolution); Clearing Out, Tunisia One Year After (Dégagement, la Tunisie un an après); Get out! A revolution (Dégage! une révolution); Jasmines, Between Art and Revolution (Jasmins, entre art et révolution);  I vote (Je vote); etc.

Photography is, since 14 January 2011, the medium with the most visibility

In a year’s time, numerous young photographers who took images of the insurrections have become known through exhibitions in public or private spaces. This new genre of artistic photojournalism sparked an interest among gallerists that, until this point, had remained timid. In its movement, the profusion of photographs generated the decision to create a "house of photography," initiated by a young photographer.

Moreover, the images of photographic artworks are largely diffused either on Facebook or on televisual media in Tunisia and internationally. It was also these photographers, in addition to graphic designers, who were selected to participate in different events in Europe organized in relationship to what has been named "the Arab Spring."

The abrupt democratization of the arts naturally gave way to very unequal aesthetic creations. In the lot of productions, as is the case in times of social movements, it was often the protesting tenor of artworks that was privileged by gallerists. For all that, this dynamic of creation and exhibition was not followed by the stimulation of the art market, which remained narrow and cautious. The few collectors remained rather prudent, while still encouraging these young artists. Even if the purchasing commission of the Ministry of Culture attempted to enlarge their acquisition of artworks to include exhibition spaces heretofore ignored by the Ministry, we cannot speak of a restructuring, or even of a new art market.

As for the artworks that were able to travel to Europe, and notably to France, to be exhibited, they were selected less to be integrated in the larger art market than to constitute a window onto the Tunisian Revolution and interest in it.

A productive debate about the visual arts scene

Numerous events have taken place in order to debate the place of culture today during a period of democratic transition and, more generally, the situation of the arts. We can cite:

Tunisian curator and writer. Professor of Aesthetics and Philosophy of Art at Tunis University. 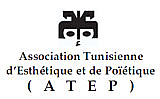 Appeal of the Tunisian Association of Aesthetics and Poetics for a cultural revolutionary process. 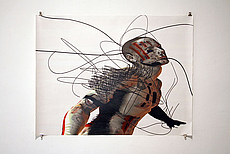 Interview with curator and philosopher Rachida Triki on the current developments in Tunisia.