Curating in Times of Need: Political and Cultural Changes in Jordan 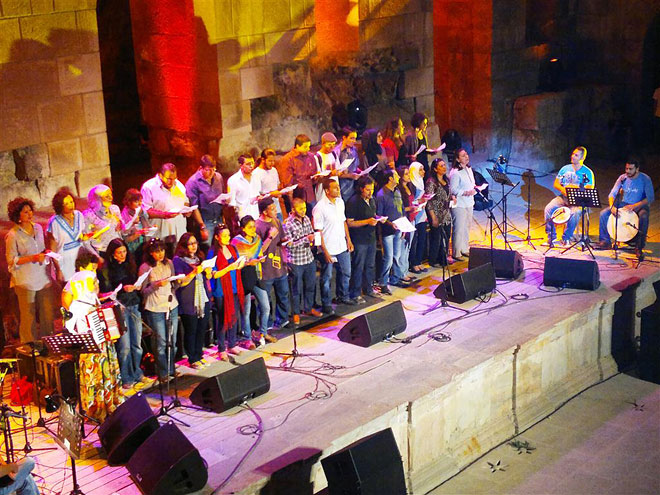 The Young Curators Workshop titled Curating In Times Of Need, organized by the Berlin Biennale for Contemporary Art for the 4th time, brought this year 14 young curators to Berlin and Kassel to participate in a nine-day workshop, as a meeting point to debate about the urgent questions, emerged from the current political and cultural changes  –from the Arab revolutions, through various Occupy movements, to the students' protests in Chile–, and the pressing need to imagine alternative civil societies utilizing the means of art.

Toleen Touq, a young curator from Amman, gives here some insights about the changes that her country is undergoing, and how her projects intend to articulate voices, stories and debates in the context of Jordan's present critical culture.

Paz Guevara: How do you perceive that the cultural institutions in Amman reacted to the revolution in the Arab region?  How is the articulation of the current cultural debate in Jordan?
Toleen Touq: First, it’s important to note that the revolutions in the Arab world affected Jordan on the street level where people started protesting to call for the reform of the regime but not its overthrow. Workers protested and striked for better wages and working conditions. The level of debate in the public and private sphere exploded, and this, of course, trickles through to artists and cultural institutions, just like any other group. But overall, the power structures in Jordan have not reformed, and all that has happened for the past 18 months can be summed up in makeover acts and short-term solutions to systemic and structural problems, leaving the country in a current state of instability.

I would start by saying that most cultural institutions did not change their programs substantially with the uprisings in the Arab world per se, but changes happened elsewhere. Public spaces became the new location for cultural manifestations, and new instances for cultural and political debates, and independent artists and initiatives are becoming the force that is changing the cultural and political agenda of the city.

What is happening more frequently now is that independent artists (such as rappers and musicians) and initiatives (such as loose collectives working on politically charged cultural events, citizen journalists) are initiating their own events, programs and ideas that the institutions or spaces are hosting, rather than waiting for them to be programmed. So, in a way, we can say that they are occupying cultural spaces in the city.

Institutions that are mostly non-profit and privately run, such as Makan art space, Al-Balad theatre, and Darat Al-Funun, were already critical and courageous in their programming and continued to do so since the uprisings through their regular programming (exhibitions, debates on the current political and social situation in Jordan, activism film screenings, political concerts, controversial plays on gender issues, etc.). We have to recognize and remember that their resistance was present before 2011, and now they continue to support critical movements.

On the other hand, institutions that were less socially and politically engaged (such us government owned and municipality run theatres) remained so. Clearly, the most radical agents became the citizens themselves, individually and collectively. Through grass-roots tactics, they activated the public space, articulating new voices, agendas, modes of expressions and debates. They are the ones that are ultimately developing a new culture in Jordan. Many creative manifestations with political demands occurred throughout  2011 (online videos and animations, graffiti, hip-hop flash-mobs etc.) The political and artistic use of on-line networks, where films, videos and music with political and social motivations were popularly uploaded, were crucial to communicate the new demands and images to a wider community, and a great tool for political pressure and alternative media (such as 7iber, Ammannet, and the usual Facebook and Twitter outlets). The hip-hop scene has been one of the major areas where political debate is being forced and in a very creative and well-produced manner. In the end, independent agents are being empowered, but it remains very challenging in light of conservative politics and modes of thinking.

Paz Guevara: You have been recently writing a blog about the current situation in Amman, as residency-blogger of Manifesta Journal, focusing indeed on the changes and reappropriation of public spaces. You entitled your posts as "Monuments of Despair," taking the main place of the protest in Amman as a starting point for your analysis. Could you introduce us to the new meanings, use and commemorative value of this public space?

Toleen Touq: The space in question is Duwwar Al-Dakhiliyeh, which translates to "Interior Circle". It is a central location for cars and public transportation in Amman. On March 24th and 25th of 2011, the largest demonstration took place there, attempting to turn into a sit-in or camping site for demonstrators until their demands of systematic reform are met –there were seven clear goals at the time for economic, political and social equality as well as ending corruption and fraud. On the second day, the sit-in was violently ended by the Gendarmerie. This event proved to be a turning point in the discourse around the reform movement itself, and the location became the reference for both political motivation and repression. A few months later, the space was ‘renovated’: a series of fenced plant pots were placed and a huge black placard stone was erected, void of any inscription. With these modifications, it is not possible for a large group of people to gather in the space anymore. I like to think of this as urban planning for politics (by the authorities), but I also tried to imagine some subversive citizen acts on these renovations through the blog; as in a masked assailant adding a memorial text for the man who died during the demonstrations. [1]

Paz Guevara: Jordan's King Abdullah II, under the pressure of major uprisings, speaks for the first time about democratic reforms. In this context of social change in Amman, what are the new needs and debates of the cultural practitioners?

Toleen Touq: Within cultural production, the need for independent local and regional support for artistic and creative programs is a very present demand, calling for emancipation from the dependency on foreign funding from European and US cultural and social bodies. It is a clear awakening for regional collaboration rather than cultural dialogue, usually a prerequisite for receiving cultural funding from these organizations, a factor which has also contributed to a lot of European artists visiting Jordan for dance, theatre and film festivals, but very few Jordanian artists getting chances to travel abroad. Cultural practitioners are now starting to realize that they need to form unities to combat these influences, as well as, and primarily I would say, to combat government hegemony over ‘state’ culture and its complete lack of support for independent artists and spaces, let alone its lack of programming of government owned spaces. I think, gradually, artists and agencies are becoming more concentrated on bringing out their own local and critical references.

Although the monarchy has announced their call for reforms, the situation is more nuanced and not as hopeful. The authorities have found the clever balance of allowing street demonstrations but not implementing changes substantially. As things do not change, people continue to go out to the streets but a sense of hopelessness within the general public is rising and that is what’s keeping the street movements limited in number, in addition to the increasingly difficult economic situation. I think we are now in a state of disillusionment, and this translates to the arts and culture sector too. It’s a slow process.

Paz Guevara: You are the director and co-curator of the Hayaka Festival since 2010, a storytelling and performance program that focuses on oral history. How far do individual narrations have the potential to create a new collective narrative and resistance to the hegemonic narration of the country?

Toleen Touq: Since much of the region’s cultural identity was mediated through oral history, the festival tries to create a small space for it to find its way back into the general public through performance, storytelling, films and research. The collective narration that it creates is regional; we program artists, groups, historians and practitioners from across the Mediterranean, serving a multitude of stories (as John Berger said, "never again shall a single story be told as though it were the only one.") Stories, fictional or real, in the immediacy of performance are powerful against the state’s narration as you say, and remind us of the myths of borders, among many others.

Paz Guevara: Is your Amman Complains Choir - project indeed a way to articulate this counter-narration?

Toleen Touq: Yes, I would say so. The Complaints Choir is a collective effort. Through an open call anyone can join the workshop that prepares for the performance. The lyrics are written and the music composed in a collective manner through a workshop format, and the result is the worry of censorship bodies; it is the people speaking and singing together, cynically, about what is unfair in our societies, and what they demand to be changed. The musical element adds a lot, it attracts a varied audience and creates an ironic twist to the topics presented. We have produced the choir three times so far in Amman: the first for Music Freedom Day 2011, and the second and third at the Alternative Music Festival and at a public space on Rainbow Street in the Jabal Amman neighborhood.

Paz Guevara: Do you see the potential of art to imagine the future democratic society? Are the politically and engaged cultural practices contributing for a substantial change in Jordan's society?

Toleen Touq: Of course I see the potential, art is an imaginative tool that can do many things and is not confined to definitions or limitations but the effects on society are difficult to measure. How can we see if a political engaged project contributes to substantial change? There are several projects and artists in the past years that criticized and reflected towards critical issues in their context that can raise awareness and start a gradual effect of change, but that might take years to feel. Projects that take concrete actions can be gagged perhaps easier, but, for example, in Jordan the symbols of power do not explicitly interact with culture and art manifestations for us to see and know how it affects the system. So, in this case, art can serve as a reminder, as a tool for engagement.

Surely some projects are creating awareness and debate: the Karama Human Rights Film Festival, which started in 2010, has been attracting a tremendous amount of audiences year after year, and it presents local as well as regional and international films. It is held in a government owned theatre so actually bridges a lot of gaps in terms of audience backgrounds, and creates discussions between viewers and filmmakers on sensitive subjects.

Other projects like La Valise Rouge, a play presented and directed by Lana Naser, questioned gender and religion roles explicitly at last year’s Aat Women's Festival. The same year, Makan presented a pan-Arab political comic project which was self-distributed and initiated by graphic artists Ganzeer from Egypt and Nidal El-Khairy. El-Far3i’s hip-hop act has presented some of the most audacious lyrics in contemporary music and culture in Jordan.

These works are important, because now is the time for introspection in Jordanian society, and one way, not always the most immediate way, is through art.

Writer and curator from Chile. Lives in Berlin, Germany, and Latin America.

Organized by the Berlin Biennale for Contemporary Art in collaboration with:
Allianz Cultural Foundation, BMW, and Goethe-Institut e. V. 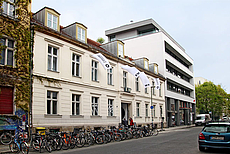