The Changing Room in London

Review of the show in London, with projects addressing or evoking the desire of change in the Arab region. 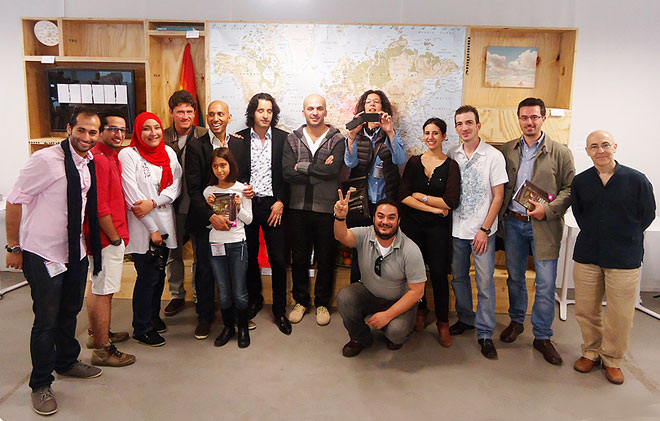 Location, Location, Location. That's right, three locations. The Changing Room, an exhibition of Arab art first realized in Italy, has come to London to be displayed in three different spaces - a Westminster office hub in the New Zealand House, an underground gallery, and in Davenport's magic shop at Charing Cross station. Often the works seem like a magic trick indeed, where things are not as they seem - a video by Adel Abidin of a group of Egyptian men sitting in the traditional tabla or drum circle seems par for the course until you see they have traded their usual percussion instruments for puffy rounds of pita bread.

The rhythms the drummers intonate are hypnotizing, a spell broken only by a metaphor announcing itself - in light of the Egyptian revolution bread has come to stand for human rights. Dressed in suit and tie, the musicians take their work seriously and their rhythms are ceremonious - celebrating births, marriages, and the holy feeling that comes with a really good night out in Cairo (all of the tabla players that Abidin gathered play professionally for belly dancers in nightclubs). But underlying their song's feverish quality is the anxiety of bringing bread home to the kitchen table (Adel Abidin, Bread of Life, 2008).

This kind of effortlessness when incorporating challenging social subjects within an appropriate artistic vehicle can be found in most of the works, curated by Aida Eltorie. Nermine Hammam's set of postcards Upekkha (2012) are inconspicuously placed next to a jug of water and glasses by the cafe of the Hub. The postcards transform soldiers in the Egyptian army by photoshopping them into a new setting - on holiday. Standing before a sunny beach or snowy mountain the soldiers’ expressions gain a new dimension. You could see it as funny, or you could see it as sad, how indignant and lost the soldiers seem at being taken out of their familiar context by an unseen hand and mysterious digital software. It's particularly discombobulating to see young Egyptian soldiers placed in the frenetic buzz of a start-up hub in the heart of London.

Hammam herself notes in her artist’s statement how young they seem, "[squinting] their wide eyes and tiny frames," and in this new "Kodak" vacation setting their youth is finally manifest in a carefree form … only they are still wearing their uniform and guns. Standing in the Westminister Hub of the New Zealand house, the qualities that Egyptian nation-building and start-up culture both share come to light, in their common aim to dedicate inexhaustible amounts of energy to progress to new frontiers.

Setting compounds meaning when it comes to The Changing Room. The very live experience of watching Ibrahim Saad create a mural in the shop window of Davenport’s Magic Shop (a trade that has been owner Bill Roy’s family since 1898 and makes them one of the oldest "magic families" in England) gives one a taste of divine orchestration. The shop, which is located underground at exit 9 of the Charing Cross tube station, is simultaneously hidden away and widely-accessible at the same time - looking for it feels kind of like getting to platform 9 and ¾ at King Cross Station, the one that takes Harry Potter and his friends to Hogwarts. Standing outside Davenport’s with other art lovers, budding magicians and underground tube commuters watching the mural layer and transform, the air is filled with an electric anything could happen feeling.

Aladin makes things happen - it is thanks to him that The Changing Room found its home(s) in London. The civic diplomacy expert and art curator explains that the Charing Cross thoroughfare is as inclusive as it gets: free, public, and also provides shelter from the rain. He explains that his collaborators, the aforementioned magician and community organizer Bill Roy as well as the founders of Westminister Hub, are equally "anti-vernissage" and prefer to avoid the alienating pecking orders of the commercial art world in the favor of a true "communion with context." Aladin paints a picture of The Changing Room’s soft opening - hosted on a Trafalgar square bench, with drink and biscuits catered by a late-night corner store. The bubbling guests, artists and friends, leave the outdoor party only to coincide with the time that last train leaves the center of London.

Aladin also notes that the project would not have been possible without the support of the UK and MENA offices of the British Council, 7 point 9 and Finding Projects, among others. The roster of esteemed international organizations that have happily aligned their agendas with the exhibition give its presentation and style a muscular feel, but one that aladin feels is not "contaminated" or commercialized by the Olympics. Instead The Changing Room presents itself as an ideal platform for uniting diverse interests, including artists’ delivery of their individualized interpretations of collective dissent in the Arab World, and the participation of different cities and governing bodies in these alternative narratives of political events.

Participatory moments in the exhibit include Karim Al Husseini’s Black Box, which functions as an alternative voting station for audiences to write and submit their own comments and hopes for the Arab world. Pressing "play" on the iPod shuffle that hangs by Anas Al Shaikh’s work Gulf of Phantasmagorias empowers audiences to hear such a diverse collection of audio snippets from Iraq and the rest of the Arab Gulf that one is empowered enough by the malleability of propaganda to maybe go home and record your own well-meaning diatribe.

Khaled Barakeh’s Greatest Hits installation is similarly spellbounding - the artist collects together artifacts to represent the distinct tensions within the Arab-Israeli conflict, drawing his inspiration from the ironies and incongruences of naming. The Greatest Hits collection blurs the definition of a "hit," linking pop culture to military tactics, and Barakeh is successful in creating a narrative about mainstream acceptance of Israeli violence. The growing collection of objects includes a rainbow flag entitled The Rainbow War which refers to the phenomena of "Pink-Washing" whereby the Israeli government pushes gay rights as a diversion tactic from the question of Palestinian human rights. Alongside the flag is a piece entitled The Gift, which features a large world map, with the entire land of Palestine/Israel cut out of it. The hole is backlit by a red light, giving the entire shape of the contested nation the visceral appearance of a glowing wound.

Perhaps the greatest magic trick is the inclusion of Larissa Sansour’s Nation Estate photographs in the show. Her work has taken on a mythological character as "The Work That Shut Down the Lacoste Elysée Prize." Nation Estate is a series of fantastical photos that depict a luxury high-rise with a piece of Palestine on every floor - Ramallah and Jerusalem are among the cities and places which get their own suite in the building. Although the giant Lacoste world brand and its partners deemed her work "too Pro-Palestinian" and cancelled the prestigious art prize altogether, The Changing Room lives up to its name by keeping things fresh and giving Sansour’s work a new life. 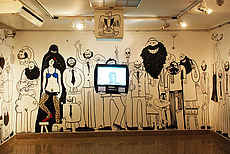 In an exhibition in Cairo, the Young Artist’s Coalition critically revisits the last 3 decades of Egypt's history.