Removing the Past: Shift Delete 30

In an exhibition in Cairo, the Young Artist’s Coalition critically revisits the last 3 decades of Egypt's history. 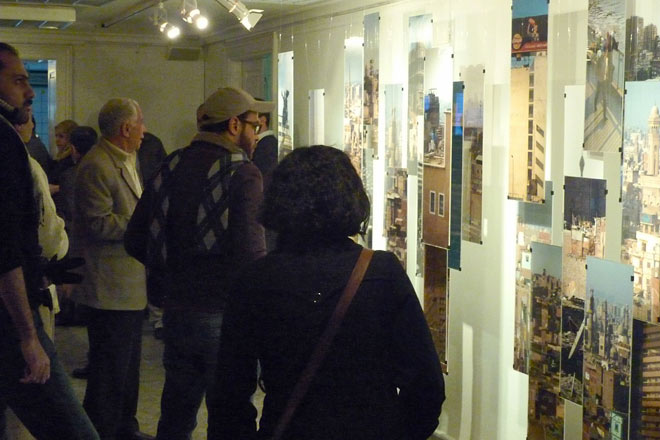 Cairo. On January 10, 2012, one year after the 1/25 uprisings in Egypt, a show opened at Saad Zaghloul’s House of the Nation (Beit Al Uma), the cultural center behind the mausoleum of the leader of the revolutionary opposition against colonialism in 1919. This site was selected by the Young Artist’s Coalition and its organizational supporters with the objective of referencing history and reminding us of the repetitions of our past.

The Young Artist’s Coalition was founded during last January's uprisings by committed artists who had taken to the streets, and continued to march to the voice of all those who had realized that this was not the Egypt they were meant to be living in for the past 30 years.

Shift Delete 30 features 13 artists (born in the late 1970s to mid-1980s) selected by Ibrahim Saad, Mostafa El Bana, and Amr Amer [1], showing an unconventional combination of commentaries that emerged from the awareness that the 30 preceding years — which they could only know as their lifetime — needed to be erased, or in some cases revised, developed, and reintroduced from their own perspective.

When first entering the premises below the ground level of the Centre, visitors are confronted with compartmentalized rooms conjoined by a hallway:

The first room shows a mural by Bassem Yousri, rendered in the same sarcastic illustration tone that he uses to depict characters found in Egyptian culture. Ancient Egyptian gods, the Muslim Brotherhood, wrestlers, clowns, Coptic Christians, businessmen, employed and unemployed citizens, construction workers and peasants, protestors and midgets, all line up under the Egyptian eagle, scornfully holding a banner over their heads that reads "The Parliament of the Revolution", totally misspelled. Framed by a painted television, the artist himself appears on a video as a spokesman for "All the important issues" (as the video is entitled). His clothes show his unemployed condition, and his rattling nonsensical conversation becomes a projection of what people have turned into from years of illiteracy and deprivation.

When passing in front of the world map designed by Osama Dawod, one cannot help but recognize how obviously it is just a world map like the many sold on the downtown pavements. However, the Arabian Peninsula is missing: Dawod removed an entire region that has been a large safety net where Mubarak, Ben Ali, and Qaddafi could seek refuge if they failed to regain their people’s loyalty.

In the next room, Ahmed El Samra shows a remake of an open-source game called "Angry Birds". A physics-based stylization of wingless birds being slingshot over a hill to destroy the greedy pigs’ fortresses, the game is about their survival since the pigs have been stealing their eggs. In this work, El Samra changes the game's name to "Angry Boys" and recreates the possessiveness of political survival of thug life vs. peaceful protestors trying to survive between sets of angry oppositionists.

On the wall in front of the game, the work by the youngest artist of the group is displayed. Mohamed Mohsen (aka Chetos) creates "The Republican Oath", a pledge of allegiance to the nation and its people. Placed over the Golden Eagle, it states:
I pledge allegiance by God the Great,
To protect with dedication our national rule,
To respect our law and constitution,
To protect the interest of our people wholeheartedly,
To protect our rights of independence,
Our country and our territorial integrity.
The piece "GPS" by Osama Abdel Moneim — who together with Ibrahim Saad won the Grand Prize of the 22nd Youth Salon in Egypt’s Palace of the Arts one month ago — presents a map and aerial photograph of a part of the Nile where one can see the 6th of October bridge, a political landmark that connects Zamalek with Downtown and leads to Tahrir Square. The longest bridge in Cairo was named to honor the start of the 1973 October War against Israel. The pride and dignity gained during the 1970s under Anwar Sadat seemed to have become lost once the country entered the "experimental era" of Mubarak’s regime and the 30 years that were yet to follow before the collapse of his power over people.

Reserved in a small hallway, Islam Kamal’s video entitled "Action TV" shows how to protect oneself against tear gas, police beatings, and thugs attacks. As a kind of political medium, it instructs in the movements of self-defense, criticizing at the same time the effects of blind advocating. Although Egyptian Television would never show citizens an instruction video on how to protect themselves from state attacks, this type of video, however, would appear on YouTube or be shared privately among friends.

Mohamed Abdallah's "Limited Edition" room is very similar to a mobile phone store that carries instructions on how to operate a communication service under limiting conditions. The room fools the visitor into believing that he has in fact entered a communications agency, with all the needed services, with the exception of the phone sets, which have the shape of shower heads.

In Mohamed Ezz’s photographic triptych, the portrait of a riot police officer faces the two protecting elements of the peaceful protester: a bottle of Coke and a bottle of vinegar, which were the two most important things to have with you when dealing with tear gas.

Among the final constellation of artworks, there is a museum display case with a body wrapped in sheets as if it were mummified. Its head is a sculpted donkey head, a sarcastic commentary about the minds of the bodies laid to rest. In "Dominant 1981 - 2045", Ahmed Abdel Fattah pities his generation for becoming an illiterate and simple-minded people, abused and taken advantage of by the government.

In Tamer Shahen's photo collage hanging from the ceiling, each photo strip of a location in the city becomes the backdrop to the image beside it. Layers of history, modernity, and the ugly side of reality: the dome of the Tiring Building, the Ibrahim Pacha statue, and the old Opera Square are set up against their embarrassing present in which traffic, public housing, and reduced welfare are the new facades of the city.

Amr Amer’s work in this show is very different from his usual digital collages, since he decided to define the new conditions that the country could be facing soon. On four sections of the wall, a yellow street sign shows an icon that is starting to become common in Egyptian culture. The first shows a grenade, the second a bearded man, the third an AK 47, and the fourth a fully veiled woman. Beneath each image is a box, very similar to the ballot boxes, beside which the artist has left a paper asking for people to share their thoughts about the image they see. The first thing that comes to mind will then be drafted into a publication that will project how the visitors related to each image individually.

Ibrahim Saad's work, the "House of the Republic", takes on a small corner of the exhibition. Referring to history a little differently than the other artists, Saad looks back at the Romanian Revolution of 1989 and questions whether what has happened in Cairo is a recycling of another cultural hegemony. Saad documents the happenings of that history and compares it with the happenings in Egypt, where the situation is still ruled by the army and the police does not operate to serve its people, but actually works against them.

At the end of the exhibition tour, Mostafa El Bana, one of the younger artists, presents his "Spring without a Leader". A timeline runs through the space, with points marked where and when particular events happened, from the day he was born to the present time. In the projection of his own young life onto the country’s history, looking at the past 30 years, El Bana marks the most important events that took place, unraveling the causes behind the country’s current social turmoil. However, he states that there has been no revolution in Egypt’s history like the one now started by its own people.

The works in the exhibition allow for an overview of what it would mean if the artists as citizens had the power to delete the thirty preceding years and remake their own history. Documenting their feelings about the political rule over the past three decades and also recording personal stories and experiences, Shift Delete 30 is a collective effort, not defined by the track record of the artists involved, nor by the quality of artistic production, but certainly it is a trajectory of what contextualizes a young artist’s coalition into actively being involved as patrons of peace and activists of human rights and national pride worldwide.

Curated by Ibrahim Saad and the Young Artist's Coalition