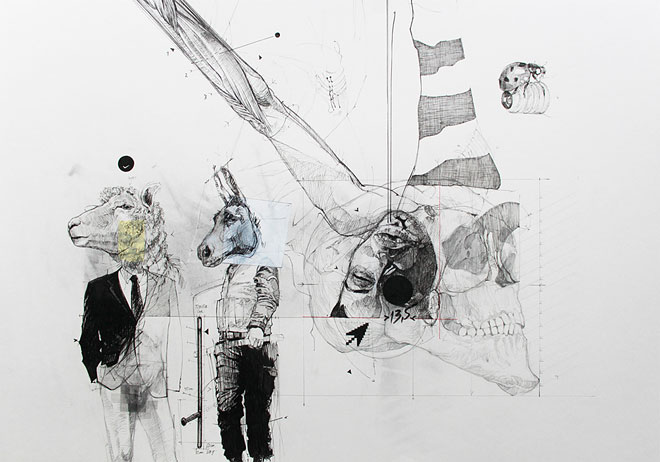 The political and the artistic have in common the fact that they both permeate the life of the city. However, while politics regulate city life, art, on the contrary, liberates it. In a politically turbulent era (the "clash of civilizations", "Arab revolutions", and a "global conflict" in the making...) the arts are all the more valuable because they present the antitheses to ideologies. They will not change the course of history, but by their very existence, they provide a raison d’être to the struggle.

In the same way we share ideas, we also share, albeit in a more implicit, subtle way, aesthetics. Aesthetics somehow tries to tell us, if we are willing to listen, that at heart, hope is not to win the fight, but to carve out liberties from the city life. The temporality of the work of art (Is art prophetic, does it accompany events, or does it rather look back in retrospect?) is a false problem. The artwork does not respond to the temporality of the political or the historic.

As such, the research and the formal peculiarities of the artworks exhibited in "Politics" transcend the "here and now" (which is nevertheless the starting point of the works) towards aesthetic proposals that redefine politics in Tunisian creation, as well as art in its relation to the city.

Nidhal Chamekh and Ymène Chetouane depart from real and well identified figures, at least in the collective imagination: the martyrs of the Tunisian Revolution and young women wearing the niqab. At the end of the creation process, however, in the drawings and the ceramics, these figures are barely identifiable. The plastic work consists in perverting the real image, to knead it, ultimately, into a hybridized figure. Through unidentifiable imaginaries, both artists blur this identification by the collective imagination.

Atef Maatallah and Ibrahim Màtouss similarly have real figures as their starting point, but these are anonymous people they meet in the street. In their case, however, their work remains attached to a certain extent to a "realistic" representation. In Ibrahim's paintings, the work of depiction resembles working the land: Layers of material, reliefs of the surface, thickness of the forms. The image, like a landscape, appears only after a long process of revelation through the elements constituting the universe of the artist: fire, paper, glue, paint... The line digs its image as the furrow in a field or a river lined with rocks. The representation is therefore primarily about organicity. The image is daughter of the tree.

Atef turns over the canvas. From the outset he deterritorializes his pictorial space to anchor his constellation of marginal characters in a no imago's land. The paintings emerge between meticulous drawing and a counterpoint of details and signs. The faces are sensitively rendered through a nuance of color, shade, or the texture of a hairiness that have echoes only in the canvas' own territory. The paintings are each traversed by a sign that surrounds the portrayed characters in a terpsichorean way, in the exhibited works, luminous snowflakes and earphones with winding cables.

Fakhri El Ghezal, Maher Gnaoui and Malek Gnaoui question the image itself, and its contemporary significance in the life of the city. Each does this from a specific angle: Fakhri, through its political instrumentalization, Maher through the appropriation of everyday objects that turn into artworks, and Malek, through the subversion of social and aesthetic dogmas.

Fakhri takes photos of frames emptied of Ben Ali portraits after the Revolution - images of an image that is no more. He does not deviate from his usual formal modus operandi: 200 or 400 ASA film, black and white, vertical framing - showing a tenacity and patience of gesture that, far from being a posture, is a true identity of photographic practice. However, the series presented here breaks with previous ones. No portrait here, no human being. The photographs are abandoned by people such as the frames photographed by Fakhri are deserted by the images they contained before. As if the photographer had removed the image from the image. In doing so, he points to the use of images as propaganda. The photography is made to challenge both itself and its own absence.

Maher's street-art practice is found on walls but also on everyday objects. For years (sometimes with some visiting friends), he has drawn, painted, scrawled, scribbled, tagged on the doors of a wooden cabinet bequeathed by his grandmother, until a picture emerges. Maher creates street-art on walls, but also a kind of "home-art" on everyday objects. He carves images and words out of objects like a well driller who digs into the earth to get water. This does not change the nature of the object, but its image, tattooing its surface. Street art takes art out to the streets; Maher brings street art into the house.

My "TV" videos deal with media discourse, particularly that of television. Media discourse in general and television discourse in particular is twofold: it is pronounced and it is also apparent. There is never a gap between these two essential components; everything is organized all the time so that both give the impression of being harmoniously significant. "tv01" and the work in progress "tv02" intend to dislocate this media discourse by the process of delay between the picture and sound.

Born out of the artists’ own initiative, "Politics" is an exhibition which proposes works that challenge the established aesthetic order to better challenge the established political, moral and social orders. The "commitment" is not defined in the statement of a politicized discourse or the edification of a myth of dissention, but redefined by multiple deconstructions of discourses and constructions of forms.

The exhibition has no curator. It is organized by the artists themselves with the help of the center’s director Sana Tamzini.

The project initiated by Tunisian artists will present inedited works at the Centre d’Art Vivant de Tunis from 4 - 31 May 2013.