Workshop on Art, Ecology and the City, and how to revitalize Tehran’s derelict underground irrigation network: the qanat. 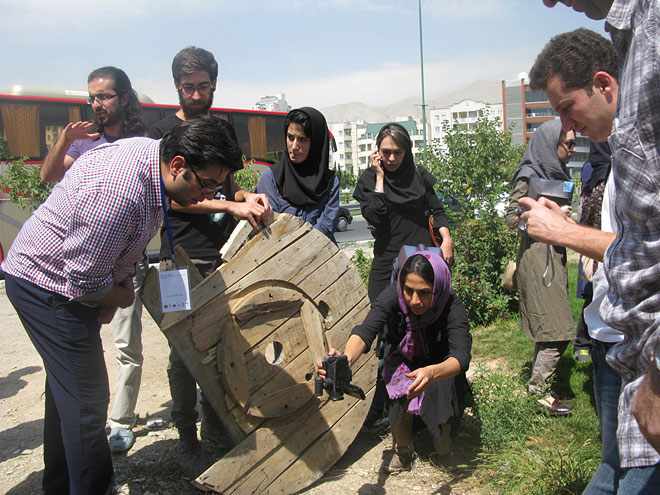 Tehran is the biggest city between Istanbul and Mumbai, a city of 13 million in the desert. Like all other cities in Iran it was positioned strategically at the foot of a mountain in order to source water. But all this is forgotten today, and the urban sprawl has come to erase the memory of the underground water irrigation network: the qanat. It isn’t surprising that this organic water infrastructure was disregarded in the sixties when models of western modernization were pasted for the growth of Central-Asia’s capital. But today’s numbers are shocking: over six hundred abandoned underground galleries flush two hundred million cubic liters of wasted water annually.

HydroCity, an international research lab at the intersection of art, ecology and the city recently led a workshop on Tehran’s qanats at the University of Tehran, School of Architecure. HydroCity has a mandate to offer visionary proposals for real time challenges. The workshop was in partnership with Paris’s Ecole Spéciale d’Architecture, through French philosopher Chris Younès’s Sustainable Development Project for Cities program. The question wasn’t how to re-vive Tehran’s qanats in their traditional form, but to imagine what place this infrastructure can play in a contemporary context.

Iran is a desert but with mountains, a condition that allowed the Iranian civilization to invent the qanat, an ancestral underground irrigation infrastructure that led to the invention of the garden and by extension the city. The qanat directs water from the underground aquifers deposited at the foothill of a mountain by infiltration of melted snow. Seventy percent of all cities in Iran are thus by a mountain. Imitating the movements of water on soil, an underground gallery is dug directly in the bedrock, with a well every twenty or so meter. So the qanat is basically an invisible line punctuated by dots. Relying purely on gravity, the natural slope of the ground is used to distribute fresh water to lower sources. When it makes surface, the water is generally distributed in the city through a network of open-air canals. In fact in Tehran, the historic city starts exactly where the qanats end, where the water makes surface.

The qanats are the invisible ruins of modern Tehran. But today the city’s relationship is in a state of total inversion. The city was literally flipped in the last thirty years. The downtown core was abandoned and the “new city” was built on the northern slopes; on desert land underneath which the qanat galleries and wells run. Tehran doesn’t have a proper waste water system. The citizens deject their wastewater directly into the ground and at times directly in the qanat wells. The equivalent of 90 million water bottles are being injected in Tehran’s underground daily, creating an artificial lake only a few meters under the city’s surface and over five hundred meters deep. This water runs under into the downtown core where the soil is soft enough for water to infiltrate. The suburbs are infesting the historic city. The qanat is no longer playing the role of irrigating natural groundwater, but instead has become a wastewater network.

The workshop was a novel opportunity for a multidisciplinary and international team of architects, and artists to work together on the future of this derelict water network. A particular place was accorded to artists, inviting them to reflect along with designers on the immaterial dimension of the city: its population and lifestyle. Each artist worked with architects and a group of eight students. The four teams worked on specific neighborhoods strategically chosen in relation to the qanat network’s structure. From upstream to downstream the neighborhoods revealed the uptown-downtown flow of water.

Neda Razavipour, Shahab Fotouhi, Amir Hossein Bayani and Peyman Shafieezadeh were there to insure that the dialogue didn’t remain formal. This invitation deems that art can play the role of imagining models of action for changing society. What are the concepts that can drive the qanats into becoming monuments once again? Time, identity and iconography became pivotal. The artists’ foremost preoccupation was the population’s amnesia to this underground life force. Amir Hossein Bayani writes: "The most simple view of the qanat narrates life and movement in the underground. Meaning that water, the liquid of life is constantly flowing in the underground and all this happens away from the eyes of citizens on the surface. Thus the truth is not necessarily what lies in front of us."

Strategies to bring social awareness consisted in land art installations mapping the invisible network. These proposals were made by Neda Razavipour and Shahab Fotouhi’s teams, who had previously worked on environmental installations together such as their Census project. Placing light in the wells, or colored spots around them became a way to create a signal going beyond just declaring their existence. Shahab Fotouhi insisted on the static atmosphere of the contemporary condition. By being constantly projected in the future, by living in a superficial world where everything has become as flat as an image, his blue spots on the ground create an unexpected event pushing the viewer in the present.

Another art installation proposed by Neda Razavipour’s team consisted in creating a memorial for a dying orchard in Darakeh. Tehran has a tradition of fruit trees, especially mulberries. In Razavipour’s case study a historic orchard is drying out because a high rise project had recently obstructed the qanat gallery that sourced water to the trees.

Other proposals included an "inverted qanat" responding to the massive wastewater buried under the historic city. This man made underground lake is a precious resource that has the potential to be filtered and re-used to green the city. The system drains water to surface through active cylinders where an internal tube of sand and gravel filters it before it is poured into the open-air canal network (jub). Oxygenating plants in the canals continue the purifying process and create a means to green the city, and offer a new landscape to the streets. This proposal is also a means to clean up the historic city, and promote a sort of downtown revival. Considering Tehran from the underground up, feeding on that invisible layer as a life force seems evident in imagining the potential for its future. Groundwater banking, groundwater infiltration, grey water recycling and phyto-epuration are becoming emerging practices for designing with climatic, tectonic and biologic parameters. The main preoccupation being to incorporate natural cycles of transformation in architecture and public space.

Eighteen proposals were made in total. Three of these proposals are being presented to city officials in hope to make them happen. One of these includes a national celebration day for the qanat. An idea brought forward by Shahab Fotouhi, for whom social awareness and citizen responsibility was the most problematic aspect of the subject. An exhibition can complement the national day, where information about the qanat’s history, structure, and current condition will be communicated. The MesoCity workshop was the first time people in Tehran were looking at their lost heritage. We hope that other workshops and projects will come feed this initial step. Working with artists has proven to be very successful by the heterogeneous quality of the proposals. Art has a social responsibility, and can contribute in imagining strategies for the change the contemporary city seeks. The city is a mix, and can no longer be thought, planned or designed without a hybridization of knowledge. Creating platforms for multidisciplinary exchange is vital in bringing forward innovative solutions for civic identity, and the difficult realities of community building.