Interview with artistic director Okwui Enwezor about the focus of the event in these times of change. 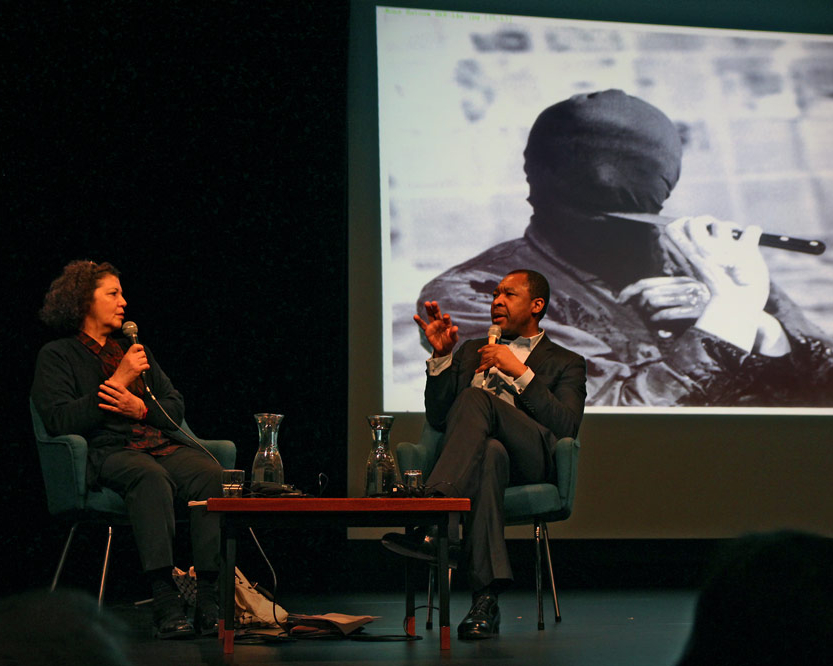 Meeting Points is a multidisciplinary event initiated in 2004 by Tarek Abou El Fetouh and coordinated since then by the Young Arab Theatre Fund, the organization he directs in Brussels. With the aim of creating connections and interactions with and among artists from the Arab region, it takes place as a series of events touring different cities.

The festival's sixth edition is curated by Okwui Enwezor under the title Locus Agonistes: Practices and Logics of the Civic, as an "an open forum for emancipatory logic, new public spheres in civic society and artistic positions in both the Arab and western worlds".

After Beirut and Brussels (Damascus had to be cancelled), Meeting Points 6 converged for three days at the House of World Cultures in Berlin, featuring performances, readings, workshops, round-table discussions, the re-enactment of Mona Hatoum's performance "The Negotiating Table" from 1983, and videos of others of her performances, as well as a retrospective of the Syrian filmmaker Omar Amiralay and documentaries of the uprisings of the past year. Meeting Points 6 was opened by Enwezor himself with a lecture on "Civitas, Citizenship, Civility: Art and the Civic Imagination" in the framework of the Mosse Lectures of the Humboldt Universität Berlin.

On Friday 13 January 2012, we had the opportunity to interview Enwezor about his Meeting Points' experience:

Haupt & Binder: When we conducted our first interview with you almost 15 years ago as the artistic director of the 2nd Johannesburg Biennale, already at that time you stated your interest in exploring "what the role or what the situation is of being a citizen in the particular context of shifting political landscapes" [1]. So this means that you have been focusing on what you call "civic imagination" for a long time. To what degree has it been necessary to modify your curatorial concept for this edition of Meeting Points while the "political landscapes" in certain Arab countries started to shift tremendously since the beginning of last year?

Okwui Enwezor: It's interesting to hear back my words from 15 years ago. And if there is any comfort in hearing that back, it will be in the consistency of the curatorial stance that I've adopted over the years, namely to think about an expansive context within which artists practice and to continue to insist on the necessity of avoiding any kind of geopolitical delimitation of who can be part of such a conversation – also to avoid becoming euphoric about the appeal of what we may call "global citizenship", and because obviously that appeal and the euphoria surrounding it is constantly modified by the realities on the ground. Having said that, in the context of Meeting Points, every project has its particular conceptual validities, and you are trying to approach things from the point of view of what is meaningful for the project. So for Meeting Points, working in the so-called Arab world, North Africa, the Middle East, and Europe, it was very important for me to ask what can this project teach me, rather than beginning with my own predetermined list of artists; what can I learn from it – not from the political changes that are going on, but from the critical cultural shifts that are being constructed, and it goes without saying that this critical, artistic, cultural, curatorial rethinking is obviously informed by the political, cultural, and economic transitions that are going on. And, in terms of the civic, as I travelled in many of these countries, I took the opportunity to step back and to try to perceive what could be conceptually generative for my own curatorial thinking, rather than this question of the civic as a set of ideals that will recur across the region – and you have been in this for a very long time, and so you know the degree to which the situation in this region has changed very rapidly only in the last 10-15 years. I was on the jury of the Cairo Biennale in the 1990s, and there was no Townhouse Gallery. In the meantime there is  ACAF,  CIC, or Cinémathèque de Tanger,  L'appartement 22,  Ashkal Alwan,  Beirut Art Center,  Makan, as new structures.

Okwui Enwezor: I don't want to give anything back, I think I am really in an ongoing dialogue with colleagues and artists in this region as a natural continuation of the expansive terrain in which I work. I don't want to give anything back, I cannot presume that I have anything to give back. I can only presume that the great intellectual and social hospitality that I've received in this project was part of a continuing discussion with the colleagues and professional structures that I've worked with since.

Haupt & Binder: We mean it more in terms of results, effects…

Okwui Enwezor: Oh, yes, the effects for me would be to continue this dialogue, this debate with the artists and carry out more projects beyond Meeting Points, and, as you know, I have worked with a number of artists from this particular region for some time and this will continue. I can't conceive of making a project today without thinking about this expansive landscape in which I have been working. And you will see this in Paris, when you come to La Triennale [2], just simply because – as I said – when I began, I wanted to know what this project can teach me, and I am still in the process of learning from it, from those artists, from the region.

Haupt & Binder: Yes, we think we know well what you mean, because this is what we always say, that Universes in Universe and Nafas are a continuing learning process and that we hope to share this learning process with people all over the world.

Okwui Enwezor: Yes, but I suppose that you want me to sharpen more what my expectations are … What I would say is that if there is anything that is coming out of this, it is foreground for the research into this question of the civic and the importance of it in elaborating a new conceptual horizon for how we think about forms of contemporary art coming out of places of instability, places that are still on the go, in transformation or transition – but beyond that, also even here in the West. That's why I believe that we need to go beyond the kind of "activist positions" like "Occupy Wall Street" (which doesn't impress me), these are things that have been expected in societies where avenues of dissent have been exhausted.

Haupt & Binder: It is interesting that the people always need some point of departure to discover their own civic awareness and get active. Of course here in Berlin in 1989 there was a very important civic process, but nowadays one has the impression that the uprisings in the Arab world have a strong influence also in the thinking, especially of young people. This was evident, for example, when the other day, people here in Berlin protested in front of the German president's official residence even showing their shoes, using this Arabic symbol.

Haupt & Binder: Going back to Meeting Points, yesterday, you stressed the difference between being a spectator (consumer) and becoming an observer who analyses and reflects on what he or she sees. Is this the reason why you have chosen the format of scenic lectures, performances, and discussions for Meeting Points 6?

Okwui Enwezor: Let simply make it clear that I wanted to place it slightly away from the classic ethnographic Malinowskian participant/observer model in which you go deeply native; but nevertheless, it kind of evokes that. But that is what curating for me is partly about. There is a kind of ethnographic instance in curatorial practice, because you set out on a journey to collect, rearrange, and re-sequence materials, objects and to form them into a coherent narrative, after all that's what exhibitions are. But rather than really working on that kind of a linear frame of an exhibition, this project decided to adopt hybrid formats, precisely to break any sense of continuity or linearity .

Haupt & Binder: So also having in mind more this idea of an "agora" of discussions, debates, workshops with the public?

Haupt & Binder: It is interesting that you work with this concept of "agora" in Meeting Points, because now, and as you know very well, there is the discussion about the Humboldt Forum [3] here in Berlin and what its "agora" could be, but this is another issue. Are you still on the Humboldt Forum's advisory board?

Okwui Enwezor: Yes, still I am.

Okwui Enwezor: The problem I have with this notion of "agora" is when only one particular part of the world is conversing and the other part is listening. But I think it’s a worthwhile approach, however, whether it really unfolds is something that one has to wait and see. I already made public my own sentiments about this and I better not add more fuel to the fire. But I think the agora concept, and this notion of a parliament of voices, a parliament of perspectives, is urgently needed, because exhibitions are not enough!

Haupt & Binder: Yesterday in your speech, and also reading your introduction, we felt a certain separation between political activism and artistic actions. To what degree do you think that art can be a "practice" or model of civic relations, given the relatively free space that artists have (or take), often even in countries under dictatorships or absolutist governments?

Okwui Enwezor: This is what is occurring, and we have this experience from Argentina, South Africa, China, and the reason why it's important to talk about the civic is that civil society is by definition an arena that is different from that of the state, the family, and the market, but civil society is one part of that ensemble that defines what society in total really represents. And conceptually, this is the space in which arts and culture actually belong, not in the realm of the state, not in the realm of the market, not in that of the family. Art is on the other side, it is on the side of the civic, and what I'm trying to point out is how the projects of curators and artists in these societies become the key places where these values are raised. It is not that artistic projects or activism is set up in opposition to the state, because it is very easy to suffocate. But it can be subversive inside the body of the state. It is the subversive dimension of the civic that I'm really interested in. And this is what is going on, because if they are getting people to think freely without necessarily being "activist", then they are enabling a subjectivization that cannot be repressed, and this is what I am interested in.

Meeting Points 6
Locus Agonistes: Practices and Logics of the Civic