The Lost Pathos or the Pathos of Loss

About Artist and/in Community, including a residency program in small towns in Kyrgyzstan and Tajikistan. 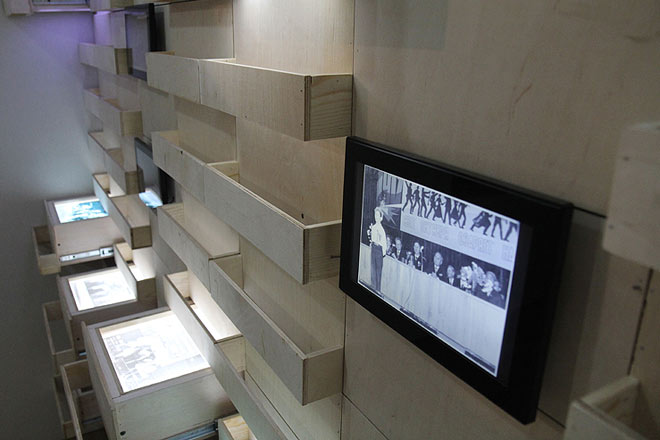 The Soviet has always been the most important theme for the artists in Central Asia. Judging from outside, we can have different opinions about accentuation of the Soviet problematic in contemporary art practice in the region – some may consider it as very local, others will see it as a trend which once had been in demand but has exhausted itself by now. However it seems that the Soviet legacy and its transformations and mutations will be the highlight not only of artistic research and practice but of any social reflection of contemporary realities in Central Asia for long. The Soviet rule laid the foundation of all the contemporary social controversies in the region. Severe ethnic clashes and diversity of ethnicities, languages and cultures; economic growth or the opposite – deep and comprehensive degradation of infrastructure and recession; efficiency or dysfunction of social institutes; political turbulence or ‘eternal stability’; stunning poverty and not less stunning luxury – all these contemporary realities are deeply rooted in the Soviet past of the region and all its traumatizing and destructive experience on one hand, and inspiring and emancipatory on the other require comprehensive reflection and understanding which probably can be produced only now, when there is a generation of artists and researchers who can look at the issue of the Soviet, not through the lens of nostalgia and personal traumatic experience of dissolve of one’s identity, but in a way ‘objectively’, with sober but engaged eye.

Production of such reflections and attempts to actualize the Soviet legacy in contemporary social reality was the declared mission of the project Artist and/in Community initiated by Dushanbe based Bactria Cultural Centre and curated by myself. Artist and/in Community, a two year project with its main geographical focus on Kyrgyzstan and Tajikistan, was also thought to problematize the intersection of artistic practice and social agenda. The project started with the month-long intense theoretical summer school for emerging artists from the region that was held in Dushanbe in August 2010, and followed with its major activity – a residency program in small provincial towns in Kyrgyzstan and Tajikistan. In November 2011, all participants of the residency program gathered in Bishkek for the three-day final conference to share their projects and reflections with each other and the general audience. The residency program included ten projects by twenty artists from seven different countries – Kyrgyzstan, Tajikistan, Kazakhstan, Uzbekistan, Russia, Iran and even Colombia. Among them are both emerging artists – mainly from Bishkek where the young art scene is traditionally very active and dynamic, and those artists who already have been present on the international art scene – like Oksana Shatalova and Jamshed Kholikov.

The focus on small provincial towns in this project can be explained by two reasons. First, it’s an attempt to overcome over centralization typical to the Central Asian states – most of the resources, financial and human, are concentrated in capital cities, like if we talk about the Kyrgyz or Tajik art scenes we literary mean Bishkek or Dushanbe art scenes. Second, small towns which were selected for the program are relicts of the Soviet modernization project. These towns had the most modern and advanced social infrastructure - schools, hospitals, stadiums and cultural centers. They bunched internationalism, working enthusiasm and social welfare. So, one can say that these small towns were a kind of sketches, mock-ups of that ‘bright future’ that was sought by the rest of the country. Twenty years after the collapse of the Soviet Union, the daily realities of these towns are suspension of industrial production, out-migration, and degradation of the social infrastructure. One of the towns selected for the residency program was Tajik Taboshar, a small town in the north of the country, which once was part of the Soviet nuclear industry and now is often described as a ‘ghost-city’. In this text I will review two projects that took place in Taboshar.

Kirill Adibekov (Moscow) and Olga Jitlina (St. Petersburg), while their residency in Taboshar, tried to analyze and understand the reasons led to the failure of the Soviet overambitious emancipation and modernization project in Central Asia: "In the late 1920s the large-scale 'Sovietization' of the East begun and one of its main goals was the emancipation of women. As part of this project and at the same time an enthusiastic report about it was the film by Dziga Vertov, Three Songs about Lenin (1934). Juxtaposing what we had seen and heard in Tajikistan with Vertov’s editing structures, we try to understand how the Soviet women's project was settled down in the region, what is left of it two decades after the collapse of the Soviet Union. We want to understand the reasons of its failure and its historical significance." (Olga Jitlina)

In their film Editing based on "Three Songs about Lenin" by D. Vertov, Kirill and Olga juxtapose scenes of Vertov’s film with the interviews of two young women, residents of Taboshar. Vertov’s constructive editing structure in his 1934 film is as simple as following: "Here is the lake where it was not. Here the trees grow where they did not. […] Here raised the factory where it was not. The University was opened, which was not here before. From old to new, from past to future ..." (D. Vertov). As simple as this was the way the new took the place of the old not only in the film but in real life too. And this simplicity is now conversely mirrored in the stories of the young women who talk of the Soviet time, which they know only from the words of their parents, as a kind of paradise: "People didn’t get ill then." Time in Tajikistan seems to go backwards – from new to old, from future to past: "There is no future here, neither for me nor for my kids."

Jamshed Kholikov (Dushanbe) with a group of fellow-artists and local residents of Taboshar makes an attempt to preserve that ‘future in the past’ in the form of the local memory museum that he created in the town’s culture house. The museum is nothing like a conventional local history museum with the formal account of local achievements and ideological crap, but a multimedia installation inspired by personal stories and local mythology collected by artists in interviews and informal conversations with the residents of Taboshar. The installation-museum is named Town-Box. During the Soviet time, Taboshar and many other similar settlements were not marked on public maps and instead of the name were called mail box #...

The new museum is seen by the artists and their local collaborators not only as the space for preservation and conservation of memory, but as an active public space in a way returned to the local community. Jamshed Kholikov plans to continue this project by starting regular residency program for artists, curators and other creative workers in collaboration with the local culture house.

The global and centralized emancipation project in Central Asia failed and only few local enthusiasts inspired by its pathos make most probably desperate attempts to preserve and assign new values to its turning into dust ruins. To preserve and actualize the past which once had been the future is not that simple concept, but probably its complexity will allow finding the slot for the present, at least.

* 1984, curator of the Platform SHTAB (School of Theory and Activism – Bishkek). Lives in Bishkek, Kyrgyzstan.

Artist and/in Community
A project about the Soviet legacy in Central Asia in today's social reality. Started in August 2010. Includes a residency program in small provincial towns in Kyrgyzstan and Tajikistan. 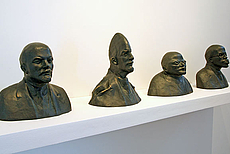 Mutations. His photographs and sculptures at the Central Asian Pavilion, Venice Biennale 2011.