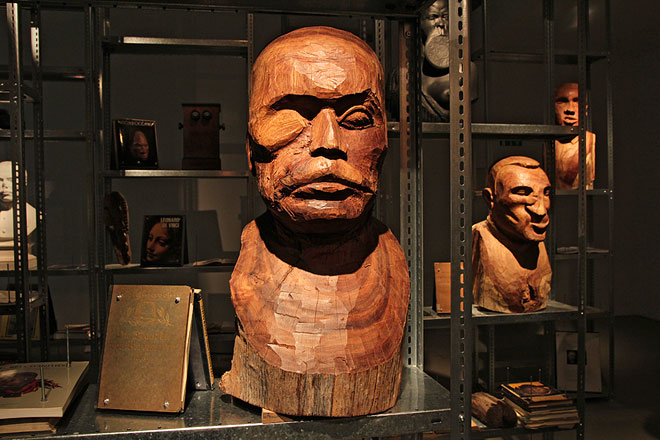 We remember Holy Land (2006), this Canary seashore that Kader Attia turned into a cemetery. It is on a similar strand that motor-boats unship stowaways who are in search of a promised land, at least those who didn't disappear swallowed up by the waves. Like so many steles or tombstones - seen from far away, one may mistake them for surfboards stuck in the sand - mirrors everywhere show the visitor his own reflection. An unsettling reminiscence of the missing in a memorial place without memory, haunted by disappearance and absence. The Atlantic strands seem quite far away from the Great War battlefields. Open your eyes carries our gaze towards the great theater of modern war. Kader Attia's installation visits another memorial site endowed with all the visibility granted by official histories and remembrance rituals. Worlds away from Fuerteventura beach, First World War trenches stick up with their dismembered bodies, dead or still alive. If Canary stowaways leave no trace and in mirrors the visitor sees only his own image reflected upon the blue sky, the Great War maimed, at least on the French side, did not go unnoticed: photographed, listed, studied, they are also - as much as possible - "resurrected" and rebuilt. And therefore repaired. To the invisibility of the Holy Land missing Africans, Kader Attia opposes these ghosts of the first half of the twentieth century whose image has been preserved because they were broken - we called them "broken faces" - and yet they were likely to be repaired, hence reintroduced in the society of the living and socially reusable in many ways. Medicine prowess, humanitarian compassion, exaltation of good works and charity organizations, heroism of the suffering combatant, war damage sublimation, reparation allows for all that and it is surprising that historians and anthropologists did not give it more attention in their works. (…)

In theory reparation stops where substitution and replacement begin. To replace: a way to compensate for what can no longer be patched up. It is also a way to keep one’s distance from what remains beyond reach: fast enough Indians in Mexico will invent organs with flutes and these instruments of a new kind will produce sounds that will delight missionaries' ear. In the second half of the eighteenth century, the waves of neo-classicism will submerge Latin American Folk and Baroque Arts. The substitution is brutal. Baroque must be destroyed and no more repaired. Giving up reparation leads so to change and rupture. Leaves that this novelty takes in turn hold of the appropriations and reparations cycle, and leaves that these cycles become - as it is the case today - increasingly rapid.

To repair is therefore also to connect - times, people, things ... - and that's why any global history of humanity must pay a profound attention to this gesture seemingly simple and commonplace which often consists in inventing a way to insert one world into another, not in a gratuitous manner, but to yield meaning and social manners. Kader Attia’s installation increases encounters and face-to-face meetings between worlds. As he explains, "It will consist in creating encounters between Western and Outer Western worlds, at emblematic times, cruel or glorious, of their history. However beyond these juxtapositions, this work seeks to present a reading of existence through universalities, more than a bipolar confrontation between West and Outer Western world". What conclusion to draw from all these objects placed face to face? Perhaps the incentive to shift borders and viewpoints, in other words "to think global". "To think global" is a challenge which historians and anthropologists are trying to take up today, eager to get out their old disciplines from the ruts of exotic monograph, from national history or Eurocentric grand narrative. How? Since the end of the twentieth century, contemporary art has opened up to us new paths: Alejandro González Iñárritu's camera, Pina Bausch's dance connect worlds and synchronize them in creative gestures, that bear one or more sense full wholes.

With Open your eyes: The Reparation, Kader Attia turns into a historian, an archaeologist, an anthropologist and ethnologist in search of objects that can show us how societies rebuild themselves, face one another, intertwine and respond to one another. The effects of European modern war par excellence, the Great War, medicine "restorative" advances and its laboratories are faced with colonization destructive assaults and natives' appropriations. As if modernity with which we are concerned today consisted of these parallel and opposite movements - African do-it-yourself craft as well as cosmetic surgery - and it is these complex dynamics that we must try to think and identify first for lack of not being used to watch them. Kader Attia sees and shows - "Open your eyes" - that which social sciences and museums are often too slow to recognize. The exercise result? A beautiful global history lesson that brings together seemingly unrelated worlds, as it detects beneath appearances the ground-swells that bind them together. Whereof the need to review the old opposition between West and non-West that we have lived upon for centuries, which nonetheless the meteoric rise of an Asia who has digested westernization, the vibrant existence of a Latin America in the heart of all United States big cities and the inevitable presence of Western Europe new populations, bearers of the unexpected and the unpredictable, are finally undermining. One would like to imagine other dialogues or extend them. …

Researcher at the National Centre for Scientific Research (CNRS, Paris), and professor at the School for Advanced Studies in the Social Sciences (EHESS, Paris).

The Repair from Occident to Extra-Occidental Cultures. 2012

History of a Myth: The Small Dome of the Rock. Poetry and reflection in a contemplative space.
Nafas