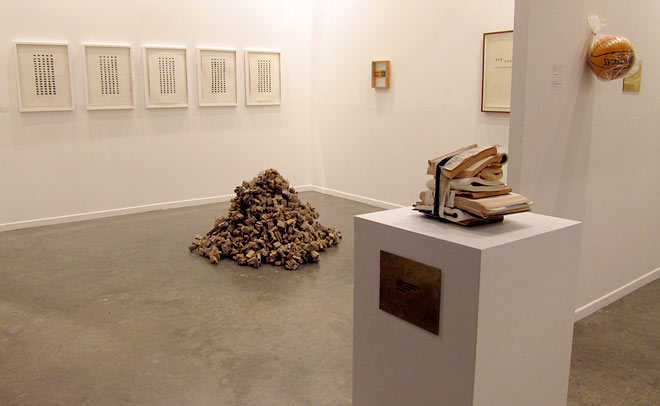 On the inaugural day of the Art Dubai were announced the winners of the 1st John Jones Art on Paper Award: Luis Camnitzer and Hassan Sharif, presented on the fair by Alexander Gray Associates.

We are particularly pleased with this decision, because we highly appreciate the work of both artists, and have featured them in Universes in Universe and Nafas Art Magazine since long time already (see the links to corresponding contributions below the text). The award grants, among other things, a joint exhibition in Dubai, which we'll make sure to feature in our publication.

On 21 March 2012 at Art Dubai, the judges of the John Jones Art on Paper Award have selected artists Hassan Sharif (UAE) and Luis Camnitzer (Uruguay) as dual recipients of the inaugural award. The two artists are shown on the stand of New York gallery Alexander Gray Associates.

The jury of the John Jones Art on Paper Award said, "We have chosen for the inaugural prize the pairing drawn between Hassan Sharif and Luis Camnitzer by Alexander Gray Associates. Both artists have had consequent drawing practices for many decades. Bringing their work together made us think anew about each artist's work and created an unexpected encounter. As Diaghilev and Cocteau said: ‘Etonnez-moi.’"

The Award was conceived by master framers John Jones Ltd. and Art Dubai to recognize the potential for excellence and innovation for works made on paper. Sharif and Camnitzer will be given the opportunity to present a dedicated exhibition in Dubai between March 2012-2013, and in addition to the artists receiving a cash prize, the winning works will be acquired by the John Jones Contemporary Art Collection in London.

Whilst the prize was originally meant to award one artist, the judges were compelled by the galleryʼs pairing of work by Sharif and Camnitzer, which brings together artists from two different continents who are pioneers in advancing conceptual art across the globe, yet have never met. Following this unexpected result, the John Jones Art on Paper Award is determining what format the award will subsequently take and an announcement will be made in the next few weeks.

Matt Jones, Managing Director of John Jones Ltd., says, "This slightly curve ball decision from the judges presents an incredible opportunity - these are two important artists whose work offers many parallels and the idea that our award could enable them to meet and work together is very exciting. Dubai has a history as a melting pot of collaborations and crossovers so it seems particularly relevant for this to have happened here."

Luis Camnitzer and Hassan Sharif
featured in Nafas and UiU - some examples:

On 21 March 2012 at Art Dubai Luis Camnitzer and Hassan Sharif have been announced as the winners of the inaugural John Jones Art on Paper Award.

Both artists have been presented together at the stand of Alexander Gray Associates, New York.