The first contemporary art award in Turkey. Photo tour through the exhibition of works by the 13 finalists at Hasköy Yarn Factory, Istanbul, and introduction. 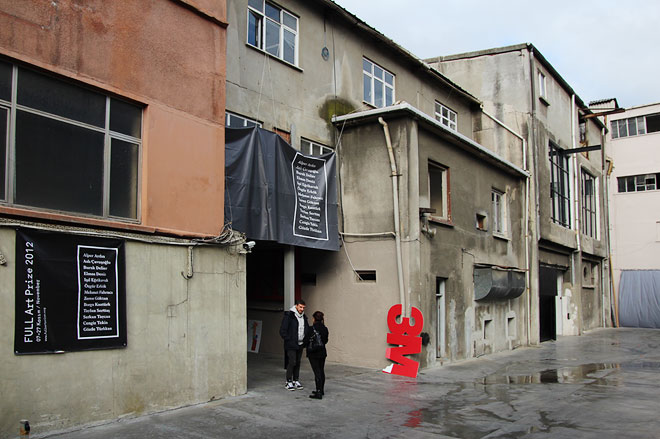 The fact that art, especially contemporary art, in Turkey lacks public support engenders an art climate that is shaped by corporate sponsorships and arts & culture investments of industrial families. This type of support bears the risk of being confined to the interests of the sponsors / patrons / institutions or art being utilized as merely a marketing strategy within public relations department of companies. In such an environment, crucial questions and fields of investigation such as "what is happening here now? What kind of artistic production is created? What are priority issues for artists?" might sometimes be overlooked.

Istanbul’s contemporary art scene, with its growing allure in the international arena and the city’s dynamism and investments in this field, lead to a parallel increase each year in the number of international galleries, art fairs and collectors coming to the city. The exhibitions and fairs opening and closing at this dazzling speed draw the art audience in like a tide rip.

While art spaces/mediums where artists living and working in Turkey can exhibit their works have multiplied in recent years, there is still the need for support for them to realize new art projects/works while ensuring a sustainability in their artistic practice, and be able to undertake projects that involve risks, which might never have sales value but have a significant contribution to knowledge production nonetheless.

Acknowledging the urgency of this need, FULL Art prize that launched by AR Group of Companies this year as a contemporary art prize priorities the growth and progress of contemporary art in Turkey, as well as discovering and supporting the newly maturing novel forms of expression for the local and global art world. Open to the participation of artists under the age of 40 who are citizens of the Republic of Turkey or other country citizens residing in Turkey for over two years, FULL Art Prize aims to institute itself towards the goal of discovering artists and introducing them to larger segments of society and supporting their productions in the long-term.

Rather than a nomination process, FULL Art Prize was announced with an open call and artists submitted applications comprised of a maximum 10 works/projects realized over the course of the last five years through the FAP website over a three month submission period from January 2012 onwards. Thus the development of the artists’ production over these five years was assessed in a holistic manner by the jury. Furthermore, the initiative sought to ensure maximum outreach by getting in contact with art faculties and art institutions in different cities and visiting artist’s studios.

The jury was elected from prominent professionals from different spheres of art. To be reappointed each year, this year’s jury was comprised of Evrim Altuğ (journalist, critic), Gülsün Karamustafa (artist), Vasıf Kortun (SALT, Research and Programs Director), Bige Örer (İKSV, İstanbul Biennial Director), Agah Uğur (collector, Borusan Holding CEO) and Hüseyin Arslan (FULL, AR Group Chair of Executive Board). Since the 300 applications submitted included very inspiring projects, the jury chose to exceed the award protocol during the evaluation meeting and selected 13 rather than 10 finalists for the prize.

In its first year, FULL Art First Prize was awarded to two artists: Aslı Çavuşoğlu and Işıl Eğrikavuk. These artists shared the grand prize of 25,000 TL without restrictions. The application portfolios of the 13 finalists were open to the public through the website for three months and visitors were able to vote for their own candidate. As a result, the artist selected through public vote, Cengiz Tekin, became the recipient of the 5,000 TL Support Prize.

For the exhibition organized on the occasion of the first FULL Art Prize, the finalists either produced new works or achieved formerly unrealized projects from their portfolios. The projects supported by AR Group of Companies have been displayed at the "sevennovembertwothousandtwelve" exhibition curated by Öykü Özsoy at the Hasköy Yarn Factory. The accompanying catalogue documents the works and contributes to the establishment of a collective memory.

While aiming to reach artists with annual open calls and support, motivate and offer new opportunities by following their work, another accomplishment of the FULL Art Prize will be the establishment of the online database. Obtaining the necessary permissions from the artist who submitted applications this first year, the visual databank will be made available to national and international art enthusiasts. The archive will expand each coming year with new submissions.

Exhibition of works by the 13 finalists