The City of the Spectacle

The City of the Spectacle. Review of the biennale of contemporary art in public space. Medina of Sfax, Tunisia, 5 - 7 Oct. 2012. 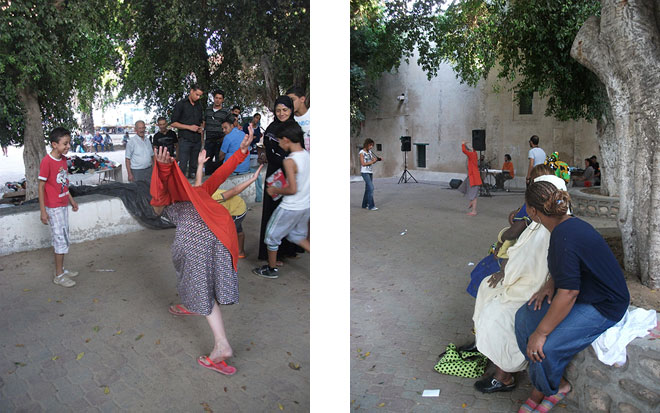 The best way for the artist to win the argument with an audience is: to be there.
Karl Kraus, Pro Domo et Mundo, Aphorisms, 1912
Old Sfax is separated from the rest of the city by an imposing wall. On the inside, there are practically no signposts. It's a medina where one gets lost. If you ask for directions from the merchants, many of them won’t be able to answer. They aren’t from "here", from this houma, this neighborhood, either. But because it is a small medina you can always find your way back.

"Here" does not exist. It’s an invention of borders. Like "now", it is quite arbitrary to begin or end it in one particular place or another. For the artist, too, "here" is more often synonymous with "elsewhere". "Here" is likewise double for the artist: the real space and the space of the artwork (the frame, the canvas, the stage…). And sometimes, the two spaces become profoundly confused. For example, when the artwork takes place on the street or takes the street, the public space, as a support.

Living theater, happening, land art, street art, urban installations… Art invests in the street to reinvent it rather than to comment on it, to disturb it rather than to assert it. The artist's work is that of infusing the "elsewhere" into the "here" of the street. Yet, in order to displace or abolish the boundaries and open up spaces through artistic practice, it is somehow necessary to help people not find their ways in this small medina where one gets lost.

Alia Sellami and Sonia Kallel each used sound material from the street in her own way: Sellami revisited slogans and revolutionary songs, intersected with diverted lullabies; Kallel collected the traders' and weavers' speeches from the medina of Tunis. If Sellami’s vocal performance impresses, although it does not adequately deconstruct the revolutionary discourse, Kallel’s didactic and discursive will (redundant testimonies, plans of the city accompanying the creation and indicating the various places passed by), confines her work to be only a tourist guided visit. The familiarity of the texts and the melodies in Alia Sellami’s "Operator" as well, as the city map on which Kallel’s journey is performed in "Tisser la Médina", comfort the listener and place him in a terra cognita of hearing, a reassessment that never transcends the statement.

Due to a very specific geopolitical context, the title chosen for this third edition of Dream City is: Artists Facing Liberties [1]. At a time when nothing is gained, neither for the citizens nor even less for the artists, the choice of the formulation seems awkward or even soothing, as it places the artist in a passive and fictitious position of liberties that are given to him instead of placing him in his creative and real position as an individual who must perpetually construct freedom. In this sense, certain isolated artistic gestures, like those of Tobi Ayedadjou and Héla Ammar, draw the viewer’s attention.

Wearing colored straitjackets in the manner of medieval troubadours or jesters (the title "Shé Wéré" means literally "to play the fool"), Ayedadjou and two other performers move in the streets in a strange way, with convulsive demarches, their steps seeming mechanical and alienated. The performance makes "liberties" a conditional term and does not even seek any collusion with passersby (unlike all the rest of the works performed in the street); it questions the role of each person in the production of oppression and social uniformity.

Meanwhile, Héla Ammar explores the penitentiary universe through a visual and sound installation (objects, photographs, sound creations). As for Ayedadjou’s work, it invokes seclusion as well. But this time, this confinement is palpable, concrete, and physical: it is that of a prison cell. "Counfa" (indicating the convoys of the prisoners in Tunisian dialect) is presented in the form of a deconstructed reproduction of the prison: here, too, the artist does not implement any virtual or relative enjoyment of freedom, but a space setting of the alienation.

Artists facing liberties. What kind of liberties does the title mean? What are these liberties that are "here" and "now" and that the artist may face? First of all, a misconception runs through this whole edition of Dream City, from the works themselves to the texts published in the catalogue. "Liberties" and "democracy" are associated in an intrinsic way. They are used almost like synonyms. However, the current limitations of democracy have been known for decades, even by the most convinced democrats. One also knows about the stranglehold of finances on the Western democratic model. This financial dictatorship within democracies requires no demonstration at a time of crisis, recession, and socio-political conflicts (the Indignants or the Occupy Movements exhibit its most consensual and media-conveyed aspects).

Afterward, viewing the proposed works, it seems that the main liberty in which the artists appear to be taking pleasure to the enjoyment, is that of the spectacle. Namely, the increasingly uniform but also increasingly inflated production and reproduction of entertainment, playfulness, and connivance with the audience. The ethnocentric Spectacle of Jilani Saadi, amazed at his own prowess of taking his movie camera in a car, bike, and even underwater in his film "Vue de Bizerte". The playful Spectacle performed by both Moufida Fedhila and Taoufik Jebali, whose desired reversals are defused by the articulation of the works in the spirit of games. The educational Spectacle held by Imen Smaoui, who dances with the audience. Etc.

The integration of the spectacle as an immanent model of production and consumption by Tunisian artists is not something new, quite the opposite. What is incorrectly called "contemporary art" in Tunisia is fully related to the bourgeois cause and is deeply governed by archaic mechanisms and concepts (in the advertising sense of the term). "The urban exposition" of photographs, realized by four artists (Kiripi Katembo, Kourosh Adim, Li Wei, and Mouna Karray) is a perfect illustration of this integration.

Printed on a large format and displayed on billboards provided by two Dream City partners, the photographs embrace all the advertising aesthetics. They blend perfectly with the iconography of marketing and communication, both in form and in substance. It is clearly a question of bending art to the demands of sponsorship and purely mercantile interests. Photography becomes the apology for commercialization in a city that dreams only of the Spectacle.

Second edition of the unusual festival of contemporary art in the old city of Tunis, Tunisia.
Nafas