About the exhibition at the Queen's Palace in June/July 2012 within the context of the Documenta 13 program in Afghanistan. 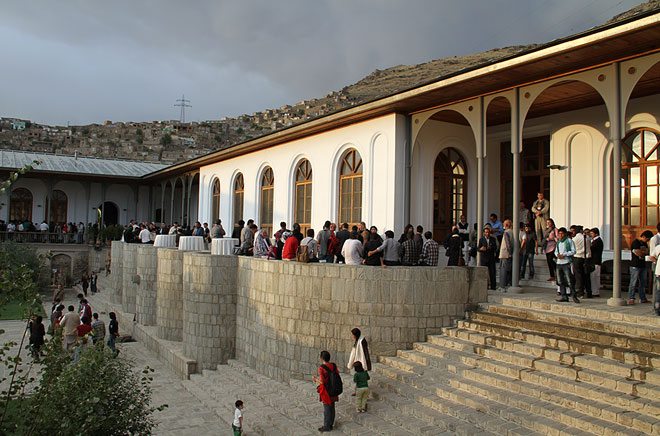 The Documenta 13 will probably go down in art history. For the first time, with a showing opened in Kabul on June 20, 2012, an exhibition was staged in tandem with the one in Kassel. In the Hindu Kush, some 5,000 kilometers east of the temporary world capital of art in northern Hessen, documenta Director Carolyn Christov-Bakargiev gave new life to Arnold Bode’s original idea from 1955.

With its 27 artists, most of them already represented in Kassel, the "Kabul documenta" was an extension of the main exhibition. The setting was the Queen’s Palace, built at the end of the 19th century and restored from 2003 to 2006 by the Aga Khan Trust for Culture after severe war damage. The two-winged building is in the Bagh-e Babur (Gardens of Babur). It was commissioned by Zahir ad-Din Muhammad Babur (1483–1530), the founder of the Mogul dynasty, whose members found their final resting place there. The gardens are a popular leisure site on the outskirts of Kabul.

Having Bakargiev’s "house gods" in the Afghan capital was a must. A work by William Kentridge of South Africa was on view in a small pavilion beside the palace. Visitors had no difficulties understanding the 1999 silhouette animation film Shadow Procession. The procession past the camera by the uprooted – miners, prisoners, migrant workers, etc. – is self-explanatory.

A stone’s throw away, Giuseppe Penone placed a counter-piece to his work Idee di Pietra, which is in Kassel’s Karlsaue. With Radici di Pietra, a marble pillar leaning against a tree and growing with it into the heights, the Arte Povera artist varies once more his basic theme: the relationship between nature and culture. Penone has made a present of his sculpture, allegedly worth millions, to the city of Kabul.

In Kassel, the Documenta 13 tried to expand the boundaries of art in the name of ecology and natural science. In Kabul, it was once again the medium of reflecting on existence. After a short trip with the car, one stands outside the gates of the city in front of the huge Darul Aman Palace, destroyed in the civil war and known from Mariam Ghani’s two-channel video A Brief History of Collapses (2011/2012), which was also shown in Kassel. Bakargiev’s motto "Collapse and Recovery" is omnipresent in the Afghan capital, more than in Kassel.

Against this backdrop, the stone books by Michael Rakowitz lost their metaphoric aspect. The installation artist from the United States had commissioned the replication – in stone from the caves of Bamiyan – of some of the manuscripts destroyed in the 1941 bombardment of Kassel’s Fridericianum. He exhibited them in Kabul. "Is this Afghanistan?" a visitor asked the artist when the latter wanted to transfer a view of the bombed Fridericianum onto a plate of glass with felt pen.

Goshka Macuga succeeded in building a symbolic bridge between the two cities, which share the experience of destruction and rebuilding. In a rounded room in the Queen’s Palace, the Kabul audience tried to decipher the tapestry of Macuga, which is based on a digital collage and shows an imaginary party in front of the Orangery in Kassel’s Karlsaue. This is the counterpart to her tapestry in the Fridericianum, which shows guests at a party with a snake in front of the Darul Aman Palace in Kabul.

More stringently than in Kassel, Bakargiev’s key term makes obvious sense in Kabul. The premiere of Francis Alÿ’s film Reel - Unreel about Kabul’s street children was an emblem for "Siege". It was projected onto a screen mounted between firewalls in the ruins of the avant-garde cinema Behzad, hermetically sealed off by armed security forces.

The legendary One Hotel, operated by Alighiero Boetti from 1971 to 1977 in the Afghan capital, because a prototype of Bakargiev’s term "Retreat" – a leisure site and a refuge at once. In his poetic documentary film Tea, the Mexican artist Mario García Torres describes how, during his search for the hotel and its renovation, his role shifted from guest to host. Now the little brick building in the back courtyard of a dusty Kabul shopping street is to become a site for artist residencies.

The wall of earth, several meters high, with which the Argentian Adrián Villar Rojas divides the Palace’s central patio, seems like a metaphor for Bakargiev’s credo of "degrowth": a symbol of a natural boundary and of art’s potency to create something out of everyday materials that exceeds reality.

What many feared did not happen: the Kabul exhibition was not an act of cultural imperialism, but the result of an aesthetic development program. The idea was not to impress Central Asia with transatlantic art: 15 of the 27 artists in the showing come from the region. Like Jeanno Gaussi, who was born in Kabul in 1973 and has lived in Berlin since 1978. In her work Peraan-e-Tombaan(Pant and Shirt, 2012), she embroidered and appliqued traditional Afghan clothing with military insignia – an image of the country’s rapid militarization.

Two years before the opening, documenta artists had also already worked together with Afghan students in the Afghan Seminar. In the empty stone caves of Bamiyan, Michael Rakowitz had young sculptors recreate small-format copies of the Buddha statues the Taliban destroyed in 2002.

Together with film students, Mariam Ghani looked through Afghanistan’s national film archive, which was hidden well enough to escape the iconoclasm of the Taliban. And in the Seeing Studies by the Berlin artists Natascha Hadr Saghighian and Ashkan Sepahvand, young artists took inspiration for works of their own from works selected from the Afghan National Gallery; these were exhibited in the Garden of Love and Peace.

Among the remarkable talents in these courses is Mohsen Taasha. In his pictures, the 21-year-old Kabul art student combines Persian miniature painting, motifs of Islamic mysticism, graffiti, and punk to create his very own style. This showing was his first participation in an international art exhibition.

And so the documenta in Kabul returned to Arnold Bode’s original idea: cultural renewal after the barbarism of war. That it stimulated "imagination and fantasy as a driving force of reconstruction" is proven by the 35,000 visitors to the exhibition in Kabul. This is a remarkably large number in a city whose residents are fully burdened by the daily struggle to survive – and who also had to pay the admission to the Gardens of Babur before they could view the exhibition.

The 22-year-old art student Zainab Haidary, of Kabul, summarized the feeling of encouragement that Bakargiev’s credo gave her: "I come from a poor country struggling with the effects of war. But I am rich. Because I can paint."

Studied politics, history and journalism. Works as a cultural journalist and essayist in Berlin since 1990.

Documenta 13 exhibitions at the
Queen's Palace and Bagh-e Babur,
and in the National Gallery
Kabul, Afghanistan 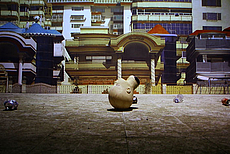 Exhibition of artists from Afghanistan and of Afghan origin at Documenta 13 in Kassel, Germany, 2012.