Review of the 7th edition of the international art fair in Istanbul, 22 - 25 November 2012, including photos of the event. 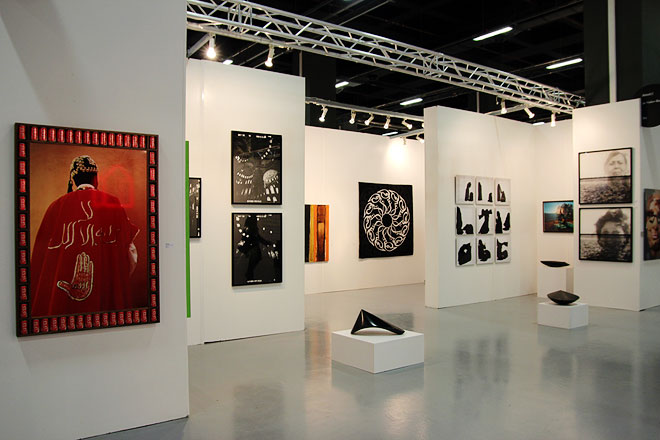 "The most extensive art fair". Istanbul’s art fair Contemporary Istanbul (CI) is never at a loss for superlatives. Two years ago, the Contemporary Art Fair, which was held for the first time in 2006, proclaimed its "New Art Destination" and even wanted to rise to become the "center of the art world". This year is to be its most elaborate. But such slogans prove only one thing: without calculated hubris, no business deals are possible in the art market.

In purely quantitative terms, the balance of the 7th edition is noteworthy. With 102 galleries and 612 artists represented and 68,000 visitors, participation in what was until recently an insignificant regional fair has reached a new high point this year. In the founding year 2006, 49 galleries with 150 artists and 37,000 visitors came to the exhibition halls of the Lütfi Kırdar Congress Center at the foot of the elegant district of Nisantasi.

But that’s not enough to provide the CI with blue-chip status, which demands more than that, with 57 galleries, more than 50 percent of the exhibitors came from abroad, including two global players with Haunch of Venison (London) and Marlborough (New York); that high-priced works were on offer, like Andy Warhol’s Portrait of Barbara Molanksy for 5.2 million dollars at Galerie Cordeiros (Porto); and that the Opera Galerie (Geneva) landed a coup selling Jean Michel Basquiat’s work Logo for 3.2 million dollars.

With sales figures totaling less than 40 million, the CI still trails behind Basel and London – despite adopting last year a design modeled on the Art Basel, staging an elaborate VIP program, and carrying out for the second time a Dialogue series with speakers like the American Concept Artist Joseph Kosuth. For example, no important gallery from the art Mecca, Berlin, was present.

And yet the fair’s strenuous exertions toward internationality wouldn’t be necessary at all if the Contemporary Istanbul would concentrate on what makes it unique and sought to become a hub for the Middle East, Central Asia, and the countries once in the Ottoman Empire’s sphere of influence. But one sought in vain for galleries from Egypt or Lebanon. Only the photo gallery The Empty Quarter, from Dubai, was represented.

And then European galleries with a leading function for these regions didn’t come, either, like the initially announced gallery Rose Issa (London). The Eastern European and Dutch regional emphases chosen as an alternative this year did not offer the "new horizon" that was at least partially opened up in the last two years toward the Gulf states and Iran.

The dominance of large-format painting was a sign of the average quality of the works shown. Classics like Devrim Erbil with his Istanbul urban scenes (Olcayart) or the already somewhat stale pioneer of Modernism Bedri Baykam (Piramid Istanbul) were juxtaposed with only a few critical contemporary artists like Sener Özmen (Pilot), Burhan Kum (The Empire Project) and Sükran Moral (Zilberman). Many galleries pandered to Orientalist yearnings or the popular taste of the well-heeled Turkish middle classes.

Examples of this include the Dervish variations of the Turkish photographer Mehmet Günyeli (Narart/Pages) and the life-sized bonbon statues by the French sculptress Laurence Jenkell (Artam Global Art). It’s hard to say whether the fair did anything to change the often-lamented mentality of Turkish collectors, who preferentially collect Turkish artists. At any rate, the Istanbul gallery Dirimart sold the picture Bangkok No.4 by the German artist Andreas Gursky for 450,000 euros to a domestic collector.

The CI Contemporary is the prime example of a fair whose sudden growth is fed by the hope for future profits, buyers, and artists. The reasons for this are the economic boom on the Bosporus and the rapid expansion of the Turkish art system. Along with the number of wealthy Turkish collectors, the number of graduates from ever more art colleges and universities is also growing. "We have become a hub and have to deal with it," said Hasan Bülent Kahraman, the fair’s General Coordinator, at the opening press conference to justify the fair’s expansion. Paralleling this fair, this year all the city’s important art institutions staged "Artistanbul", an art week modeled on Berlin’s Kunstherbst (Art Autumn).

The degree to which speculations about Istanbul as a lucrative hot spot of the art market have burgeoned is also underscored by an unknown group of investors’ announcement that it will hold a fair competing with the CI in an old factory hall on the Bosporus in the fall of 2013 – at the same time as the Istanbul Biennial. The attempt to fuse the aesthetic and the commercial season makes the Istanbul art fair an example par excellence of the marketing of what was once a critical art scene.

But despite the economic interests, criticism of the market did take place at the fair. In one of the Art Dialogues, the American Concept Artist Joseph Kosuth said, "The greatest enemy of art is the market." The aesthetic form of this criticism concentrated at the stand of the young Istanbul avant-garde gallery, Pilot. Outstanding: Halil Altindere’s newest work Art is all about desire and signature. It is simply the enlarged reproduction of the check for 43,000 lira with which the Turkish collector Mustafa Taviloglu commissioned a work by the artist, who is one of the most important representatives of the country’s current art scene. The gallerist Azra Tuzunoglu had to disappoint the many would-be buyers; Altindere’s work is not for sale.

Studied politics, history and journalism. Works as a cultural journalist and essayist in Berlin since 1990.