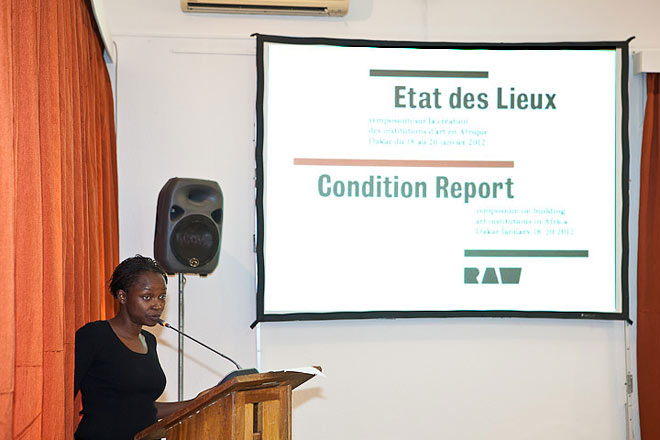 Condition Report, a symposium "On building art institutions in Africa", was held in Dakar’s Maison de la Culture Douta Seck from January 18 to 20, 2012. Organizer Koyo Kouoh, the Director of the Raw Material Company, announced, "All the continent’s colleagues are present." But there were also some from the United States, Latin America, Europe, and Asia. The Kulturstiftung des Bundes (Federal Cultural Foundation), the Goethe Institute, and the IfA (Institute for Foreign Cultural Relations) were the sponsors. Koyo Kouoh prefers German donors because they don’t interfere with the program. In African countries, the governments have their own cultural programs but are usually unwilling or unable to support independent initiatives. "Our government regards dancing for foreign diplomats, for example the Chinese, as ‘culture’," Jimmy Ogonga of Kenya remarked. So one topic of discussion was public power and how to continue to live with it. The Director of the National Gallery in Dakar, Fatou Bintou Niang, took part as a representation of official Senegal. The museum IFAN did not respond to its invitation. Madame Niang defended the state side: "The National Gallery has shown artists and is showing artists – today everything is called an ‘art center’." In point of fact, independent art spaces are a relatively new phenomenon, and the goal of the meeting was to contextualize them and develop a methodology.

In the end, the symposium restricted itself to short activity reports from the several dozen participants and a discussion of problems like funding, program design, media publicizing, and increasing visitor numbers. For Senegal, Amadou Kane-Sy, the filmmaker Fatou Kandé Senghor from Waru Studio, Marion Louisgrand from Kër Thiossane, and Mauro Petroni from Céramiques Almadies presented their art spaces. Fatou Kandé Senghor in particular emphasized the significance of training – precisely while the professors were striking again.

With the founding of his Townhouse Gallery, which provided the environs for a new scene, William Wells has been a pioneer in Egypt. Moataz Nasr, who has exhibited in the Townhouse, founded Darb 1718 in Fustat, Old Cairo, in 2008. The nonprofit organization aims to be a "trampoline" for young, unknown artists who haven’t yet exhibited anywhere. The vast country of Egypt has no more than two or three art spaces, said Nasr. But Sarah Rifky contradicted him: she herself is affiliated with CIRCA, MASS Alexandria, and Townhouse. Abdellah Karroum, with his appartement22 in Rabat, is a curator in demand around the world. He emphasized the freedom that independent art spaces enjoy. Kofi Setordji, the founder of the Nubuke Foundation in Ghana, warned against unthinkingly adopting Western viewpoints on what art is and said Africa must find its own definitions and above all release its own publications on the topic. Gabi Ngcobo, Director of the Center for Historical Reenactment in Johannesburg, South Africa, focuses on the connections between art and history, speech and misunderstanding. Equally dedicated actors from the independent art business at the symposium were Patrick Mudekereza from Lubumbashi, D.R. Congo; Goro Hama from Bamako, Mali; and Meskerem Assegued from Addis Ababa, Ethiopia. Didier Schaub and Marylin Douala Bell work for a "humane urban space" in Doual’Art, Cameroon. Georges Adéagbo and Stephan Köhler from the cultural forum South-North in Benin are counting on true international cooperation to counteract "cultural incest".

Samuel Sidibé (Musée National du Mali) and Raphael Chikukwa (National Gallery of Zimbabwe) have come to good arrangements with their museum organizations. Osseynou Wade, General Secretary of the Biennial in Dakar, admitted self-critically that there were definitely still problems – operating a free biennial and being dependent on institutions was not a simple thing. Nonetheless, the Dak’Art is the only biennial south of the Sahara.

Impressively eloquent was the contribution from Oumar Ndao, a theater man from Dakar, who criticized the dominance of the Francophones: "There are also Wolophones!"

"What are we doing here?" Koyo Kouoh wanted the Western culture sponsors to ask themselves, and he criticized that what was achieved was not partnership, but the realization of programs. The case study of Norway showed that, there too, independent art centers have to be pragmatic if they are to succeed alongside the established institutions. The New York networker Anton Vidokle pointed to Koyo Kouoh as their role model. The call was made to be less discourse-focused. After all, what do we mean by "alienation-free living conditions" if everything is art: talks, projects, and society itself? Hans-Michael Herzog is more concrete when he prepares realizations: the new Casa Daros will open in September 2012 in Rio de Janeiro, Brazil. It will be devoted to works of art and artists, not the idea of the curator.

The symposium ended in a consensus: despite differing conditions and financial possibilities in different places, everyone is working on the same thing. 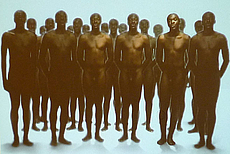