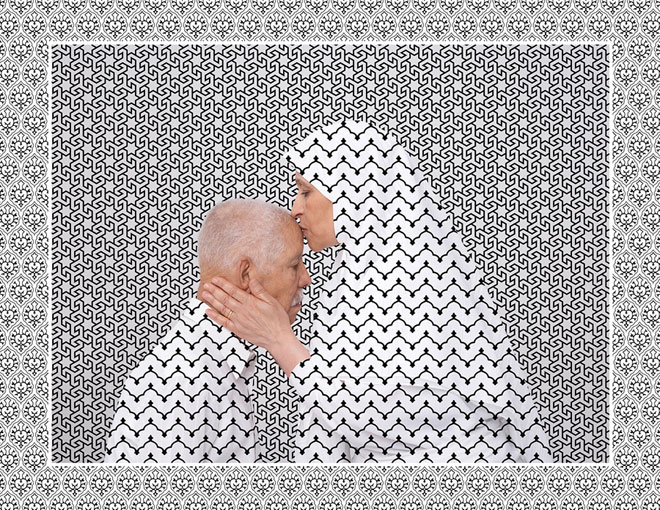 Learning by Heart, on view in the Third Line’s Project Space, is young Libyan-Canadian artist Arwa Abouon’s first solo show. It is also something of a come back. After an early success and budding career the artist took three years off to do other things. However, since her excitement of art making was suddenly rekindled early this year, the artist has been on a roll, both making art and accepting invitations to exhibit it. Currently participating in the Institut du monde arabe exhibition dedicated to twenty-five years of Arab creativity, Abouon’s work will also be showcased at ZKM in spring 2013.

Exhibition coordinator Dina Ibrahim is enthusiastic about the new show, putting forth that "The Third Line is thrilled to see Arwa, an artist with such a dedicated following both in the region and internationally, return to our exhibition space". Describing Learning by Heart as "the thematic continuation of her previous series which attempt to represent such abstract and elusive notions as human emotions and particularly faith", Ibrahim also aptly notes a new "maturity and depth in both subject and formal representation".

The Dubai show effectively picks up in many ways where the artist left off and continues to encompass a strong autobiographical element, the use of family members as models and the photographic medium. However, the images evince a new sobriety and restraint and a more complex exploration of the relationship among sight, representation and knowledge. The exhibit is small, consisting of three multi-image works.

Mirror, Mirror, Allah, Allah is a color photographic diptych in which the same scene of the artist looking into a mirror is repeated, albeit in reverse. The images are minimal, all walls and floor except for the artist, the mirror, and its reflection. In the image on the right, Abouon is wearing the loose white garments some Muslim women put on before performing prayer. The image reflected back in the ornate oval mirror shows, however, the artist unveiled, wearing a simple black wool or cotton top. In the photograph on the left, like a real mirror image, the position of the figure and mirror are inverted. Abouon is dressed in black jeans and top while the mirror displays her veiled in white. In both photographs, the artist shown in profile looks into the mirror and not at the viewer. It is only her mismatched reflection – that is the image in/of the image – that meets and holds the spectator’s gaze.

As in previous work, deliberate visual simplicity and humour serve to unpack an Islam-related theme. Here the reenactment of a famous fairy tale scene dealing with cultural expectations of female beauty recasts the sign of the veil. Abouon, who belongs to a minority of self-confessed practicing Muslim contemporary artists, explains that the work was instigated by her own relationship to the hijab and her desire to, perhaps, at some point adopt it. While the initial laughter the piece provokes diffuses the intense politics surrounding the veil, Mirror, Mirror, Allah, Allah moves beyond questions of cloth, covering and "Who is the most beautiful of them all?" The diptych possesses a disquieting, even sad, dimension. Like a hall of mirrors, nothing is what it seems. The spectator is left with a series of unanswered questions: "Is an image real?", "Can I trust what I see?" or "Is seeing knowing?" The new uncertainty towards visual representation and self-representation apparent in the diptych becomes ever clearer when compared to earlier works fully confident of the stability of sight and materiality.

Facing Mirror, Mirror, Allah, Allah, is Silent Sight an installation composed of four monochrome canvases encased on each end by a photograph. It too interrogates the viability of vision and visual representation as dependable forms of knowledge. The black and white photographs are close-ups of the artist’s father. The eyes of the elderly man’s face softened by his white beard are closed as if he is listening to something. His wrinkled hands are held behind his ears or, on the contrary, over his mouth. The images, evoking the beginning and end of Muslim prayer, are, however, just as effective without these specific cultural references. This imaging of biculturality in which visual power and beauty enable translation is characteristic of Abouon’s art. The four canvases declined from white to black that trace the path between the two photographs carry enigmatic words or sentences. "I hear you" and "I am everything and nothing you see" read the ones in English, while the other two carry brail renderings of "Muhammad" and "Allah". That the sole overt references to Islam and Islamic spirituality are coded relates not only to issues of cross-culturality. Silent Sight, as the title denotes, posits the limitation of physiological vision and representation. Seeking to widen the visual arena, to render it more reflective of experiential reality, it introduces both textual and tactile elements, or, stated differently, senses other than vision.

The third piece, I’m Sorry / I Forgive You, is a diptych featuring the artist’s parents kissing each other’s foreheads. The narrative aspect and richer unrestrained mode of visuality may echo earlier work but the mise en scène exhibits greater self-consciousness and an almost baroque-like aesthetic. The artist has transposed unto the photographs, different tessellating patterns on the couple’s clothes, the background and even the frame. Abouon has in the past used the visual tension created by competing– perspectival and planar – modes of representation as an aesthetic strategy but never to this extreme. The layer of Islamic-style geometric designs simultaneously highlights and obscures the scene; highlights because it seems to both draw attention and give shape to the couple’s interpersonal relationship and obscures because its op-art effects make it difficult to sustain the gaze on the husband and wife. As in Mirror, Mirror, Allah, Allah and Silent Sight, I’m Sorry / I Forgive You is looking to expand representation in order to integrate what is sensed or intuited rather than just seen.

It is no accident that Abouon called the show Learning by Heart. The certainty of representational imagery that has characteristically informed her work has been replaced by a deeper understanding of vision and representation as partial and hence, as working in tandem with other senses and faculties. Seeking to transcribe experience in visual terms, the artist using a variety of means, references the cultural, mnemic, emotional and other types of intangible investments that produce both individual and collective systems of knowledge and sight. It will effectively be interesting to see what comes next.

Postdoctoral fellow, University of Montreal. Arts writer and consultant. Based in Montreal, Canada.