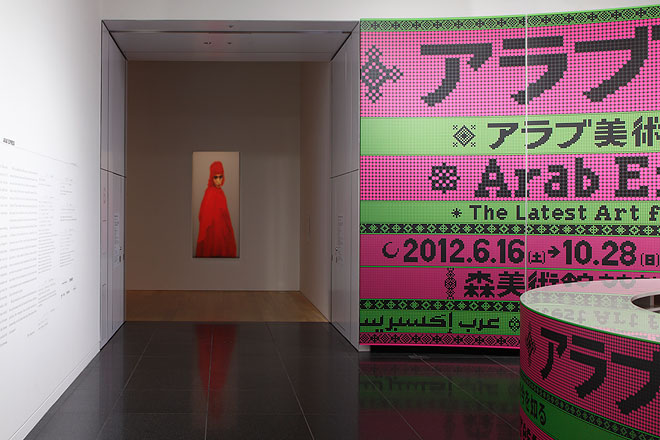 This is the first exhibition in Japan showcasing contemporary Arab art at a large scale. It introduces the diversity of the Arab world and contemporary Arab art through three sections: Everyday Life and Environment; The Image of Arab: Gaze from Outside, Voices from Inside; Memories and Records, Histories and the Future (more about the sections, see below). The show features works mainly produced since 2000 by 34 participants from 10 Arab countries, spanning Iraq and Oman in the East to Egypt in the West, with a focus on the Arabian Peninsula. Since the "Africa Remix" [1] exhibition was held at Mori Art Museum in 2006, and in order to avoid any redundancy with that exhibition, other than Egypt that is one of the most important countries in the Arab history and culture, the Arab countries in the African continent have been excluded from this exhibition.

"Arab Express," the title of this exhibition, conjures up many different images including a newspaper or an express train. It is a metaphor for conveying, to Japan, the current status of the Arab world and its art, which is transforming and moving forward as rapidly as an express train. As a fictitious newspaper, the exhibition queries what the real image of the Arab world is, and whether such an image even exists.

(From the catalogue text by Kondo Kenichi)

Sections of the exhibition

Section 1:
Everyday Life and Environment
This section is focused on artworks that provide a glimpse into the little-known realities of everyday life in the Arab world. The works introduce issues related to the problems and contradictions stemming from a severe climate and environment, the oil industry, rapid urbanization and political divisions. Works referencing the rich Arabian popular cultures are also included.

Section 2:
The Image of Arab: Gaze from Outside, Voices from Inside
This section includes artworks that resist stereotypes and attempts to group the entire region under the singular term "Arab." Many Arab artists these days are involved in a reconsideration of the image of the Arab that has been constructed in the West and may have been re-imported back into their region. In so doing, those artists seek to create their own images of themselves.

Section 3:
Memories and Records, Histories and the Future
Things that one wants to forget but cannot, things that one wants to pass on to future generations, things which one wants to be widely known: In the parts of the Arab world that have experienced religious or political strife or social revolutions, art is often seen as a form of documentation or archive. This section is focused on the "memories and records" of the present and the past. The aim of the curators is also to reconsider the role of media such as photography and film, which are presumed to convey reality; "collective memory," which is supposed to be a shared repository of truth; and their fictious nature.

Arab Lounge:
A variety of contents help visitors to deepen their understanding of the Arab world, including a book corner (from specialized history and philosophy books to fashion and lifestyle magazines), and a selection of videos of Arab scenery shot by the museum staff as well as other videos that explore the mysteries of Arab life and Arab mathematics. There is also a selection of tourist materials, film previews and other materials provided by Arab embassies. In addition, throughout the exhibition, the lounge will play host to various specialists who will give lectures on aspects of Arab culture and seek to open up a new dialogue between the region and Japan.
All the participating artists in alphabetical order:

Arab Express:
The Latest Art from the Arab World