Art and humanness in the museum of Indonesia’s greatest expressionist in the city of Yogyakarta. 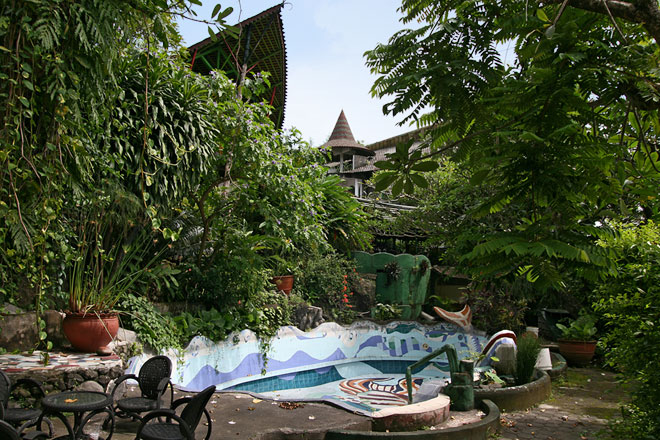 In the form of huge banana leaves, the roofs of the Affandi Museum arch high above the Gajah Wong River. The flowering garden around the former private home of the famous painter once lay idyllically on the fringes of the central Javanese Sultan’s capital Yogyakarta. Today cars, trucks, and motorbikes rattle along the multi-lane arterial road to the airport, past the high wall behind which lie the grave and the legacy of Affandi. He was the first Indonesian artist to draw international attention with his Expressionist style in the 1950s, when he won prizes at the biennials in Venice and São Paulo.

Born in 1907 as the son of a sugar factory foreman, banana leaves served him since his childhood as shelter from rain and sun. Later he symbolically protected his home and works with them. When he built the first gallery beside his home in 1962, he set new standards for the self-esteem of Indonesian artists. At the time of Indonesia’s independence movement in the 1940s, the individualistic painter was active in artists’ groups from which the first Indonesian college of arts later emerged in Yogyakarta.

His parents had actually envisioned for him a career as an engineer, but Affandi left high school and fended for himself as a substitute teacher and ticket taker while teaching himself to paint. Shadow puppet theater inspired him to take up art. His early works from the 1930s and 1940s, including many family pictures and portraits, are clearly influenced by the French Impressionists. Only later did he increasingly depict scenes from everyday life.

In 1953, he painted a self-portrait, naked, with his first grandson on his arm. Once when he couldn’t find his brush, he applied the paint directly from the tube to the canvas – and felt that make the picture much more alive. From then on, Affandi developed this technique to perfection, and with it the style that became his trademark. He admired Edvard Munch and Henri de Toulouse-Lautrec. It didn’t bother him much that he was repeatedly compared to Vincent van Gogh: "Affandi is Affandi, and Van Gogh is Van Gogh. The choice should be left up to people," he declared in a 1982 interview.

To get a feeling for the highly original life and creation of this artist, it’s worth visiting the Affandi Museum, which today his descendants operate through a private foundation. In Gallery I, designed by Affandi personally, the administration strives to present an overview of the artist’s life’s work – from the early Impressionist pictures through sketches and drawings to the late Expressionist paintings and replicas of three statues, two self-portraits, and a double portrait with his daughter Kartika. The collection is far from complete, because many of Affandi’s paintings have long since been sold all over the world. At auctions his works fetch hundreds of thousands of US dollars. Today, the museum possesses an estimated 250 originals.

And yet, for lack of space, the pictures hang one over the other in two rows, interspersed with numerous documents and prizes, as well as the painter’s private utensils: brushes, pipes, and, in the middle of the room, his favorite car, a 1976 Mitsubishi Gallant and two bicycles. "We wanted to present a few objects that were useful to Affandi during his life, to show him as the simple person that he was, as artist and as private person," explains Affandi’s grandson Juki, who now heads the museum foundation.

Works from the 1980s hang in Gallery II, built in 1987 – among them such valuable pictures as "Three Faces of Papuans", which is offered for sale for 325,000 euros. No special security precautions are visible. A little surprisingly, on the other side of the room is a wild mixture of extremely diverse paintings and statues by other artists: presents from Affandi’s friends. Works by Affandi’s wife Maryati, his oldest daughter Kartika (herself meanwhile a renowned artist), and the less well-known youngest daughter Rukmini hang in Gallery III, which was dedicated in 1997. All are greatly influenced by the father’s mode of expression.

"The greatest challenge for our museum is actually the constant lack of money and personnel," explains Juki Affandi, whose foundation receives no state support. "That’s why we have to try to make money from other sources, like the café and the art shop, without selling paintings by Affandi."

Despite its comic-like styling, the museum café is where one comes closest to the great artist: he painted his pictures in the open room under his bedroom (still in its original state), each in a single, often trancelike session. He liked to warm up with self-portraits. Diagonally across from the café, between Galleries I and II, Affandi lies buried with his wife. When she could no longer climb stairs, the artist constructed for her a mobile home oriented toward the American model, in Indonesian style. Today the colorful vehicle serves as a prayer room. Affandi himself was a devout Muslim, but decided in his old age not to make a pilgrimage to Mecca. "I have tried to concentrate on God. But when I thought about God, my thoughts always digressed to art," the artist confessed in an interview. "For me, painting is a call of the soul. I simply have to do it."