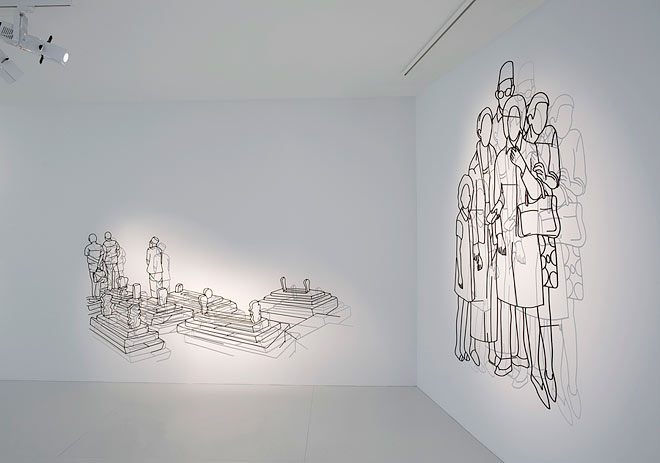 "Movida, the Javanese way", "Yogyakarta arty", "The Java of artists" were among the titles of the numerous articles published in French newspapers and magazines since 2009. Far from the usual descriptions of the temples surrounding Yogyakarta, they showed another growing aspect of the cultural capital of Java: its extremely creative contemporary art scene.

An encounter with one of the journalists (Alice d'Orgeval from L'Officiel Voyage) quickly convinced Marie-Ange Moulonguet, director of the Espace culturel Louis Vuitton, and the curator Hervé Mikaeloff to come to Indonesia and particularly to Yogyakarta at the end of July 2010. Both were immediately overwhelmed in a wave of meetings with key people to better understand the Indonesian context and the local art scene, which included the French writer Elisabeth Inandiak, the famous collector Dr. Oei Ong Djien, and many artists. The visits usually took place in their studios, Yogyakarta being a lively art scene but still lacking permanent collections of contemporary art and facing a constant change in galleries and art centers.

One year later, after hundreds of emails, phone calls, visa applications, transports of artworks, and 4.5 tons of bamboo, hours of display and work in situ, the adventure of the exhibition "Trans-figurations: Indonesian mythologies" opened on 23 June 2011 in the presence of 11 invited artists, mostly from Yogyakarta.

The Espace culturel Louis Vuitton, founded 2006 by the Louis Vuitton group, although focused on the promotion of artists from emerging and developing countries, seems at first sight entirely the opposite of the easy-going and creative atmosphere in Yogyakarta. The display starts at the Louis Vuitton window shop on the most expensive street in France, Les Champs Elysées, before reaching the gallery itself at the 7th floor.

However, as unexpected as it is, the curved shape of the rooftop gallery and the display of the artworks somehow convey the studio atmosphere in Yogyakarta. Every artist's space is different, depending of its position in the nooks and crannies of the Center. The corridor is invaded by Eko Nugroho, just as the streets are by the graffiti back home, one aspect of Yogyakarta that no one can miss, where art exists in the street before being exhibited in a space. In the middle of one of the longer curved corridors is the "kitchen", the gathering point for artists and organizers, journalists, and guests: a rendez-vous à la javanaise where no meeting can be held without makan dan minum (food and drink).

The idea, according to the curator Hervé Mikaeloff, was not to have an exhibition covering all of today's Indonesian contemporary art, but more to convey an atmosphere, some trends, and strong thematics characterizing Yogyakarta, the "hive of artistic creativity," in particular.

Arie Dyanto underlined that such exhibitions are important in Europe to show another aspect of Indonesian artworks today, which are more often related to personal daily life and small narrative stories of the artists themselves – like the rising bike community trend in Yogyakarta – and in this sense, less politically engaged than some exhibitions, for example the AWAS! show [1] at the end of the 1990's.

Besides Eko Nugroho's graffiti, there were other works created on site as well. Bayu Widodo, a member of the collective Taring Padi and founder of the art space Survive Garage, said that his drawings were inspired by his longer stay in Paris, where he "discovered another type of city life and socio-political issues, such as the situation of illegal immigrants."

The link between global issues and personal stories is at the core of Tintin Wulia's work. She was invited to develop her "(Re)Collection of Togetherness," an ongoing project since 2007, in which she imitates and intervenes in passports from all the countries on earth. In Paris it was the first time she did this with a performance, involving the audience in the making of the final work. It was very rewarding for her: "I have had so many conversations about the work – people were sharing their own personal stories on their passport and their citizenship."

Walking through this exhibition reminded me that in Indonesia most of these artists – some of them for more than 20 years – are strongly involved in creating alternative structures to support contemporary art forms: for example, Cemeti Art House with Mella Jaarsma, Kedai Kebun Forum with Agung Kurniawan, and the Apotik Komik with Arie Dyanto (not active anymore), Survive Garage, and the most recent Fight for Rice with Eko Nugroho. This very personal connection between art spaces, individual projects, and collective exhibition is well emphasized in the catalogue in the texts by Alia Swastika, which do not introduce each of the artists in a standard way, but by reflecting their position in the development of contemporary art practices in Indonesia.

What will become of this Javanaise of arts? [2] At the very moment I am completing this article, Eko Nugroho is on his way to a residency at the Villa Raffet before a solo exhibition at the Paris Museum of Modern Art in January 2012. There are two new spaces opening in Yogyakarta: HONFablab, supported by the Dutch Waag society with the collective House of Natural Fiber (winner of the Transmediale 2011 and highlight of the French Festival Mal au Pixel 2011), and the Sewon Art Space, a residency project, supported by two Austrian artists and the Austrian Ministry for Education, Arts, and Culture. Jim Allen Abel, from the photography collective Mes56, is currently preparing his participation at Photoquai, organized by the museum Quai Branly in September. Also in September in Paris, S Tedy Darmawan will have his exhibition at the gallery Wallworks.

This is the Jogya rhythm, where things come and go and move, where external elements can sometimes influence local cultures and arts, where everything may need to be restarted from one day to the next, as was the case after the earthquake in May 2006 or the eruption of Mount Merapi in October-November 2010.

As mentioned by Jacques-Emile Lecaron, a French architect working between France and Vietnam, in a post-opening ode to the bamboo structure by Eko Prawoto: "It seems absolutely unexpected and surprising that the architecture of bamboo is given birth at the cultural space of Louis Vuitton at the Champs Elysées, in Paris, as the result of a private sponsorship and an Indonesian architect (...) It would be a pity if this temple, which seems modest but which in fact contains a great density for the future, the most precious object at Louis Vuitton, is forgotten after some time."

Whatever may happen with this fashion for Indonesian contemporary art, the hive of Yogyakarta will always be creative, because of its own ability to constantly renew itself through its traditions and external influences. It would be a loss only for the international art scene if this current interest is no more than a short-lived trend.

Director of the French Cultural Center in Yogyakarta, 2006 - 2011. Before, she was in charge of the cultural exchange program at the Asia-Europe Foundation for 7 years.